Since the West African ebola outbreak was acknowledged in March 2014, approximately 27,000 have be-come infected including 11,100 deaths (41%). The cases have mainly been reported from 3 countries – Liberia, Guinea and Sierra Leone; and ebola continues to spread in Guinea and Sierra Leone, Table 1 and Figure 1. Isolated cases that can be linked to the outbreak have been seen in Nigeria, Senegal, Spain, the US, Mali and Great Britain (a total of 35 infected persons, including 15 deaths), but these countries have since been declared ebola-free. A total of 869 healthcare workers have been diagnosed with ebola, in-cluding 507 deaths, Table 2. An Italian male nurse who had been working in Sierra Leone was diagnosed on 12 May 2015 and is currently admitted to hospital in Italy. 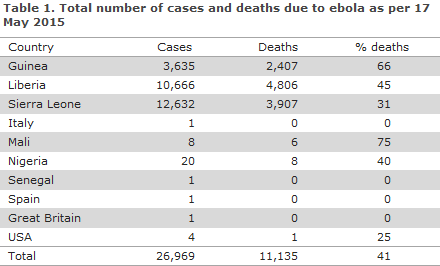 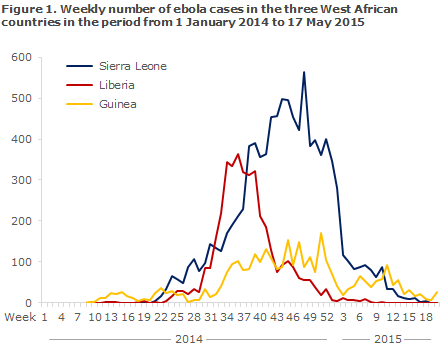 Since the end of December 2014, the number of infected persons has receded in the three most heavily affected West African countries, and on 9 May the WHO declared Liberia free of ebola transmission after 42 days had passed since the latest ebola case was buried (42 days is equivalent to twice the maximum incubation period).

In the latest WHO report (dated 20 May 2015), it appears that Guinea and Leone were once again recording a growing number of cases in the week leading up to 17 May 2015 when a total of 35 infectees were recorded as opposed to 9 the previous week. A total of 27 of the 35 cases were recorded in Guinea where the preceding weeks had brought 7 and 9 cases, respectively.

The majority of cases (22) were seen in the Western provinces, whereas 5 were seen in a north-western area that borders on Guinea Bissau. These 5 cases were probably linked to a chain of infection originating in the capital of Co-nakry and not to local infection spreading in the area in question. Inversely, the sources of infection for 9 of the 27 cases in Guinea remain unknown, which may indicate that some chains of infection in various parts of the country are still not being acknowledged.

In Sierra Leone, the week leading up to 17 May 2015 brought 8 new cases compared with 2 and 9 in the previous weeks, respectively. Four of the 8 were known exposures; in 3 cases it was subsequently demonstrated that the cases had come into contact with known ebola cases, and the final case from the capital of Freetown was acknowledged through testing of a deceased person.

It is encouraging that active spreading of the infection no longer occurs in Liberia, but unfortunately the latest numbers indicate that the epidemic has yet to be contained in some areas of Guinea and Sierra Leone. When the epidemic peaked, the main focus was the measures implemented to ensure a sufficient capacity for isolation and treatment of the affected patients and to ensure safe burial of ebola victims. These measures are now gradually downsized.

In the final phase of the outbreak, the main focus is on contact tracing to ensure that all known contacts of ebola patients are monitored and tested immediately when they present with symptoms. If contact tracing works optimally, all new cases will occur among known contacts, but that is not currently the case. Consequently, focused efforts are still required to bring the epidemic under control, particularly in parts of Guinea.

In conjunction with the WHO and other UN organisations, European organisations and institutions including the ECDC are contributing to assist Sierra Leone in achieving the positive result observed in Liberia. Thus, work is being done to implement information campaigns, strengthen local capacities and reinforce efforts to trace and monitor cases to identify and break active chains of infection.