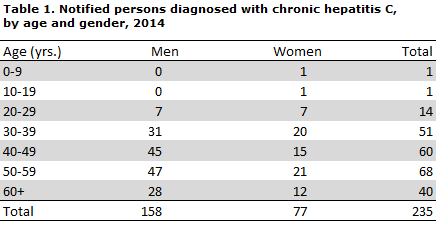 A total of 161 (68%) persons had acquired the infection in Denmark, and 49 (21%) had become infected in 26 other countries, whereas the country of infection was not stated for 25 (11%) of the cases. The mode of infection is presented in Table 3. 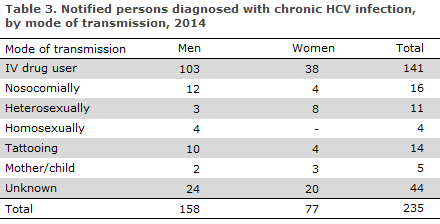 IV drug use was stated as the source of infection in 141 (60%) of the notified cases. Among these, 88% were acquired in Denmark.

In 11 cases, heterosexually transmitted infection was notified, including 9 cases infected in Denmark, 1 in the USA and 1 in Africa.

Among the heterosexually infected, 6 had engaged in sex with an IV drug user. Two were HIV positives.
Four had become infected through homosexual contact, all of whom were known HIV positives. One person was notified as having been infected in Denmark. In the remaining cases, the country of infection was unknown.

Five persons were notified as cases of mother-to-child infection. Among these cases, 2 had been infected in Denmark, one 2 years ago and the other more than 30 years ago. The remaining 3 perons were infected in the Middle East.

Hepatitis C rarely presents as an acute illness; it is generally only diagnosed once the chronic stage has been reached. When hepatitis C is detected in connection with screening of asymptomatic IV drug users and HIV positives, the classification of the case as either acute or chronic hepatitis C depends on whether negative tests have been performed within a short interval preceding the test by which it was detected. Therefore, the distinction between acute and chronic hepatitis C is sometimes arbitrary.

In HIV positives, sexual practices involving damage to mucous membranes and therefore a risk of bleeding seem to entail a risk of infection with hepatitis C higher than is the case for HIV negatives. It has been demonstrated that the hepatitis C risk of HIV-negative men who have sex with men (MSM) is equivalent to the risk in the background population.

There has been a slight increase in the number of notified persons who are assessed as having been infected in connection with tattooing, heterosexual contact and nosocomially. This may be due to increased awareness of hepatitis C, including increased testing activity, motivated by the new forms of treatment introduced in the course of 2014.

The slightly increased number may, however, also be coincidental; because the majority of the notifications do not include information on any symptoms, it cannot be determined to which extent the patients were tested due to symptoms or due to potential risks. The current risk of infection through tattooing is not considered to be increasing.

The American Centers for Disease Control and Prevention (CDC) recommend that the so-called baby-boomers, i.e. persons born in the 1945-1965-interval, be tested for hepatitis C. The background for this recommendation is that there may be asymptomatic cases where hepatitis C was acquired in connection with the reception of blood products prior to the introduction of hepatitis C screening in the 1990s or in connection with previous, temporary IV drug use.

In Denmark, no real prevalence studies have been carried out among the general population. But the number of persons who have hepatitis C detected via the blood donor screening scheme is decreasing and has for the past 10 years remained below 10 annual cases. Thus, there seems to be no basis for a recommendation of screening of specific generations in Denmark.

As previously, the groups who should be screened for hepatitis C are current and previous IV drug users and HIV positive patients, particularly men who have sex with men.
(I. G. Helmuth, S. Cowan, Department of Infectious Disease Epidemiology)