Nine were infected by heterosexual contact, five by homosexual contact. For two homosexually infected men, information on complete or partial hepatitis B vaccination was given. Five had been infected due to drug use and one via a non-occupational needle stick injury. In five cases the source of infection was unknown.

2013 saw 19 notifications of acute hepatitis B, including 12 men, Table 2. The median age was 40 years (range 10-69 years). A total of 15 (79%) were Danish and four (21%) were immigrants. Among the 15 Danish infectees, 13 were infected in Denmark, one in Spain and in one case the country of infection was not stated. Of the four immigrants, two were infected in Denmark, one in Afghanistan and one in Thailand.

Ten were infected via heterosexual contact, three via homosexual contact and two via drug use. In four cases, the source of infection was unknown, one of whom was a dialysis patient. The latter case is currently being investigated. 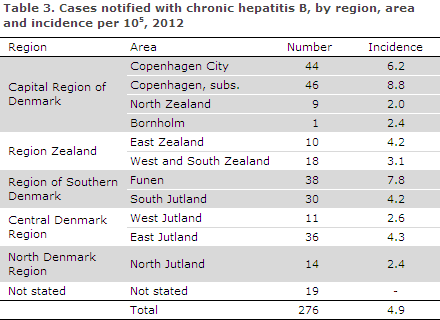 Nearly all mother-to-child infectees were of foreign origin (99%). For two persons of Danish origin, mother-to-child infection in Denmark was stated; both had been infected prior to the introduction of screening of pregnant women, EPI-NEWS 25-32/05. Eleven persons born by foreign parents were infected at birth in Denmark. This group counted two children who had received hepatitis B vaccination; one had received the full vaccination programme, the other was partly vaccinated. 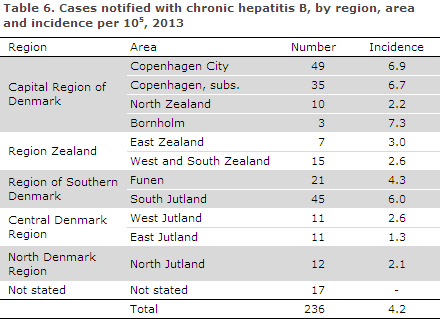 Nearly all mother-to-child infectees were infected by mothers of foreign origin (97%). Four persons, who were registered as Danes, had a Danish father and a South-East Asian mother, and were infected at birth in Denmark prior to the introduction of screening of pregnant women, EPI-NEWS 25-32/05.

Six persons born by foreign parents were infected at birth in Denmark. This group included a child who was fully vaccinated. The remaining five were born prior to the introduction of routine screening of pregnant women. A second-generation immigrant who tested positive for hepatitis B as part of the pregnancy screening had been vaccinated as an adult without having been tested first.

One of these was a Danish adopted child who had been infected at an orphanage many years earlier. The other was an immigrant from China who was infected before arriving to Denmark. One immigrant was infected in connection with a needle stick injury in Romania.

Young persons who have sex partners with a non-Danish ethnic background should be informed of this so that they can take steps to become vaccinated free of charge if their partner has chronic hepatitis B. Physicians should be attentive to this group as these persons are generally unaware that they are at risk of hepatitis B infection. 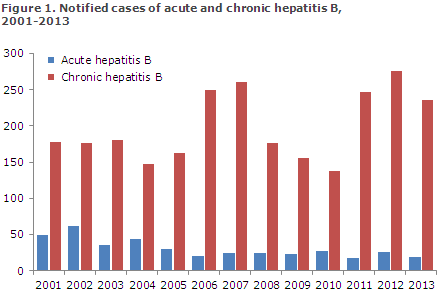 The number of persons notified with chronic hepatitis B in 2012 and 2013 was in line with the level observed in 2011 and 2006-07. In these periods, the SSI sent out reminders for notifications when the pregnancy screening reported cases which had not previously been notified, Figure 1.

Hepatitis B acquired at birth remains the most frequent cause of chronic hepatitis B, and in Denmark it mainly affects immigrants from high-endemic areas. After the introduction of general screening of pregnant women, EPI-NEWS 41/05, the number of children infected with hepatitis B at birth in Denmark has dropped considerably, EPI-NEWS 22/13. If a child who is born by a woman who is a hepatitis B carrier is vaccinated at birth and subsequently at 1, 2 and 12 months of age, it can generally achieve protection against the infection.

In 2013, screening was introduced for these children after they have completed the vaccination programme, EPI-NEWS 11/13. At present, this screening has not been evaluated, but a number of children were notified after testing positive to HBsAg despite vaccination, including two children notified in 2012 and one child notified in 2013.

In 2012, two homosexually infected men were notified; they had been infected despite vaccination. It was not stated if the two men were also HIV positive. HIV positive’s reaction to several vaccines is poorer than normal; this includes their reaction to hepatitis B vaccination. Therefore, it is essential that HIV positive persons are tested for hepatitis B antibodies after the vaccination series has been completed. This is described in the Danish Health and Medicines Authority's guideline on prevention of HIV and hepatitis B and C from 2013, which is available (in Danish) at www.sst.dk.

A woman of non-Danish origin was found to be HBsAg positive during her pregnancy even though she had been vaccinated ten years earlier. It is recommended that persons from areas where hepatitis B is highly endemic are tested before being vaccinated as vaccination of an already infected person may lead to a false sense of protection and cause further spreading of the infection.

More than three in every four notified person who was born abroad were notified more than two years after having entered Denmark. Some of these persons were probably diagnosed earlier, but were not notified. However, some will have been diagnosed several years after having immigrated to Denmark. During this interval, this group will not only unknowingly have been a possible source of infection, it will also have missed the opportunity of control and treatment of their condition.
(S. Cowan, Department of Infectious Disease Epidemiology)