From 27 August 2012 to the end of 2013, a temporary free-of-charge human papillomavirus (HPV) vaccination programme for females from the 1985-1992 birth cohorts was in place.

Several studies conducted abroad have found a significant association between ethnic background and HPV vaccine uptake, with a lower uptake among ethnic minority groups. Since Denmark is a country with a relatively large non-Danish population, it is relevant to analyze whether there are ethnic disparities in vaccine uptake in addition to describing the overall uptake of HPV vaccination in the population.

The vaccine given was the 4-valent vaccine Gardasil, marketed in Denmark since October 2006. The vaccine followed a three-dose schedule, EPI-NEWS 28-33/12.

This dataset was linked to the Danish Civil Registration System by 27 June 2013 to obtain information about country of birth and time since immigration. Vaccination uptake was determined by counting number of administered vaccinations divided by the number of females eligible for vaccination. 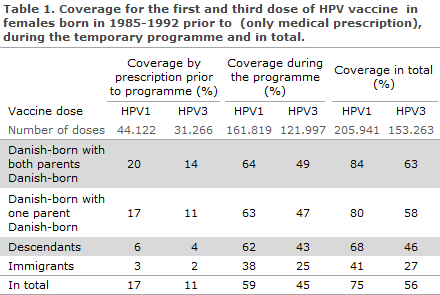 Uptake by country of birth

The effect of years lived in Denmark among immigrants

The launch of the temporary free-of-charge HPV vaccination programme was well accepted, with an increase in the HPV1 coverage from 17% to 75%. The increase was most pronounced among descendants and immigrants. However, among immigrants, the HPV1 coverage had a low starting point, 3%, and remained relatively low by the end of the programme at 41% in comparison to 68% for descendants and 84% for Danish-born females with two Danish-born parents.

Vaccination programmes are better able to control vaccine preventable diseases if groups with low uptake are targeted. In light of the results, immigrants who have recently moved to Denmark may represent a population that is hard to reach. Immigrants – especially those new to Denmark – may be unfamiliar with the Danish healthcare system and may face a possible language barrier in the access to medical services. Furthermore, ethno-cultural aspects may play a role in forming decisions about HPV vaccination.

This week sees the launch of the second European HIV Testing Week, with the theme "Talk HIV. Test HIV".

The objective of European HIV Testing Week is to raise awareness of HIV and not least to draw attention to the advantages of being tested so that treatment may be initiated early.

It has been demonstrated that the sooner you start treatment for HIV, the better are your chances of maintaining good health, and the risk of passing the disease on to others decreases.

Today, at least one in three of the 2.3 million people who live with HIV in Europe are unaware that they are HIV positive. Also, 50% are diagnosed late, which delays their access to treatment.

To change this picture, this week more than 650 NGOs, hospitals and clinics from all of Europe unite to have more people tested for HIV. Participants in the HIV testing week offer HIV testing, communicate the benefits of HIV testing and early treatment and strive to increase awareness of HIV testing among European policy makers.

The European HIV Testing Week is coordinated by HIV in Europe, which is located with CHIP under the Copenhagen University Hospital (Rigshospitalet), Clinic for Infectious Medicine and Rheumatology. CHIP can be contacted at hie.rigshospitalet@regionh.dk or tina.bruun.01@regionh.dk (phone: +45 35 45 57 93).

To sign up for the initiative, go to the website, where you may also find more information and material.
(S. Cowan, Department of Infectious Disease Epidemiology)