The 2013/2014 season was characterised by a remarkably low influenza activity in the general population assessed on the basis of the share of patients who contacted GPs and emergency call services due to influenza-like illnesss. On the other hand, a relatively large number of patients were admitted with influenza at Danish intensive care departments. This pattern was also observed in other European countries where Influenza A H1N1 was the dominant strain.

From Week 40, 2013 to Week 20, 2014, the occurrence of influenza-like illness (ILI) was reported to the sentinel surveillance by an average of 142 GPs weekly. The ILI occurrence was also followed daily via the nationwide surveillance performed by emergency call service physicians and as from 1 January 2014 also via the 1813 Helpline in the Capital Region of Denmark.

Furthermore, a novel initiative, the web-based surveillance system, Influmeter, was started in October 2013. At Influmeter.dk, anyone residing in Denmark can sign themselves or their household members up and report influenza-like and other symptoms on a weekly basis throughout the influenza season, regardless of whether they have seen a physician or not.

At end of the season, a total of 1,086 persons had signed up and in the period from October 2013 to May 2014, an average of 750 volunteers had answered the weekly questionnaire.

The occurrence of laboratory-confirmed influenza was monitored via the Danish Microbiology Database (MiBa), and occurrence and any changes in the influenza virus were monitored via samples submitted to the National Danish WHO Influenza Centre at the SSI.

Disease burden, severity and load on the healthcare system were assessed via reporting of the number of patients diagnosed with influenza at Danish intensive care units. Mortality was assessed via vital data from the Civil Registration Registry.

The occurrence of ILI was remarkably low during the majority of the season; the share who contacted a physician due to ILI was higher than in the non-influenza season only in weeks 7-11, but still it remained at a low level, Figures 1 and 2. 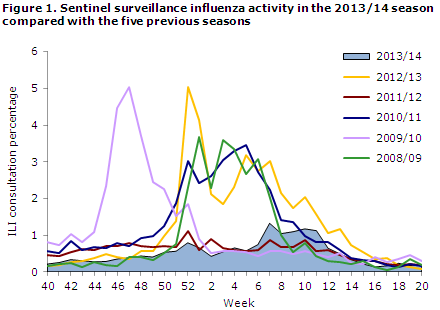 The share of citizens who reported ILI to Influmeter peaked in weeks 46 and 51 when about 6% reported ILI, Figure 3. As this is the first season with this type of surveillance, there is no basis for comparison with previous years. 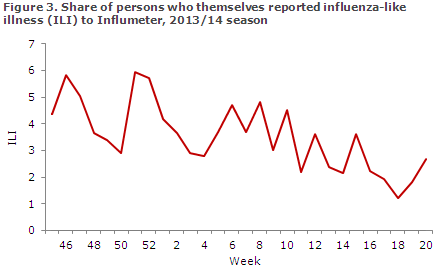 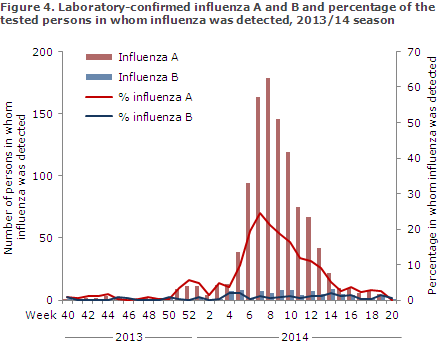 Compared with the previous three seasons, when it was also possible to extract data from the MiBa, fewer cases were detected than in the 2010/2011 and the 2012/13 seasons, but more than in the 2011/12 season, which was an uncommonly mild influenza season. Relatively few cases of influenza B were detected compared with the 2010/11 and 2012/13 seasons, Figure 5. 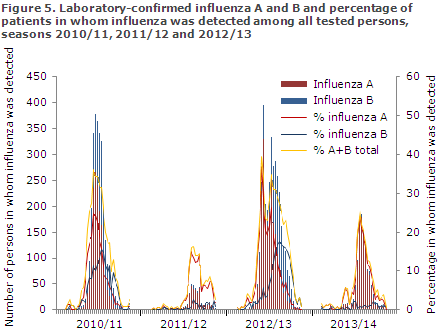 In the 2013/14 season, the National Danish WHO Influenza Centre at the SSI tested a total of 1,273 samples, including 239 submitted by the sentinel physicians, 528 diagnostic samples submitted by GPs and other laboratories, and 506 surveillance samples submitted by departments of clinical microbiology. Among these, 615 patients tested positive to influenza virus type A or B, and for 6 patients no subtype was reported. The distribution of patients by identified virus strains is presented in Table 1; 90% of the influenza-positive patients were H1N1 positives, 8% H3N2 positives and 2% influenza B positives.

The Department of Virology, SSI, performed PCR-based testing of 767 airway samples for more than 20 known airway viruses of which 115 (15%) were positive for influenza, and 286 (37%) tested positive to other airway viruses. Rhinovirus (n = 99) was the most frequently detected virus, second only to influenza, followed by RSV (n = 45) and human metapneumovirus (n = 44), Figure 6.

The National Danish WHO Influenza Centre at the SSI offers testing of influenza specimens for antiviral resistance. Furthermore, the Centre is responsible for an antiviral project performed in cooperation with active departments of clinical microbiology that focus specifically on the development of resistance in patients receiving treatment with antiviral medicines at Danish hospitals. A total of 34 specimens have currently been submitted for resistance testing, and oseltamivir (Tamiflu®) resistance was detected in one specimen from a patient with influenza A H1N1pdm09 infection who was receiving antiviral treatment.

Surveillance was active from Week 1 to Week 20 of 2014. In this period, a total of 108 patients were admitted to intensive care units s with laboratory-confirmed influenza. This was fewer than in the previous season, when influenza A H3N2 was the dominant virus, Figure 7. 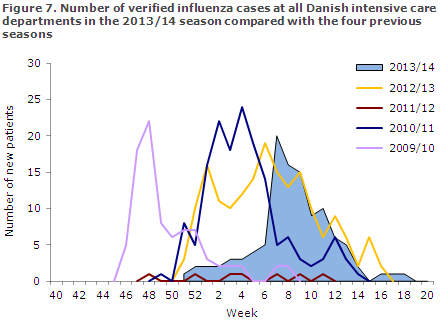 This year, information about the patients´ risk factors was defined on the basis of any admissions within the past 5 years with diagnoses that may increase the risk of a serious influenza course. The most frequently reported risk factors were age > 65 years (38 patients, 35%), cardiovascular disease (36 patients, 35%) and chronic pulmonary disease/asthma (33 patients, 31%). For 31 patients (29%), information on risk factors was not provided. A total of 29 (27%) patients died within 30 days of their latest positive influenza test; 24 of 92 patients with influenza A (26%) and 5 of 18 with influenza B (28%).

Seasonal influenza vaccination was offered free of charge to specific groups from 1 October to 31 December 2013 and also to pregnant women in their second and third trimesters until 1 March 2014, EPI-NEWS 39/13.

According to data based on electronic vaccination settlements with the Danish Regions, a total of 611,253 persons accepted the offer, including 113,015 chronically ill patients, 25,941 early retirement pensioners, 7,921 pregnant women, 2,257 household contacts to severely immunosuppressed persons and 462,119 persons aged 65 years or above.

In this age group, the overall coverage was 47%. Nearly twice as many pregnant women and approx. 15% more chronically ill patients were vaccinated in this season as in the previous season. The vaccination coverage among persons aged 65 years or more was approx. 1 percentage point higher than last year.

The number of influenza vaccinations given to risk group persons and the vaccination coverage among elderly persons above the age of 65 years distributed by area and municipality are available at www.ssi.dk/data.

The difference may possibly be explained by the use of slightly different methods. Nevertheless, the Danish vaccine effectiveness estimate is higher than last year's estimate when no effect of the vaccine was seen among the elderly, EPI-NEWS 23/13.

As last year, the WHO's recommendation for next year's seasonal vaccine is as follows:

In contrast, a relatively large number of patients were admitted to intensive care units with a serious influenza course, mainly due to influenza A H1N1, which dominated the this year's season. On the other hand, the number of influenza B cases, typically seen towards the end of the season, was very limited. No excess mortality was recorded in the population as a whole, nor among the elderly.

Influenza A (H1N1)pdm09, which was the dominant type this year, was introduced in connection with the 2009/10 pandemic and was also dominant during the 2010/11 season. This year, the number of patients admitted to intensive care units with influenza A was in line with that observed in previous seasons in which A H1N1 was dominant, but the intensive care patients' median age was higher than previously.

The contrast between the low influenza activity in the general population and signs of influenza transmission in the laboratory surveillance as well as the considerable number of patients admitted to intensive care units may possibly be explained by the fact that influenza A H1N1 runs a mild course in the overwhelming majority of cases. By contrast, persons with risk factors are especially at risk of a serious disease course due to this specific influenza subtype. The same pattern was observed in several other countries where influenza A H1N1 was also dominant.

The fact that the severity of influenza may vary from one year to the next stresses the importance of having in place surveillance systems to assess the prevalence of influenza as well as its severity. This applies to seasonal influenza in general and to pandemics in particular where surveillance allows us to ensure that any measures taken match the incidence and severity observed.

In 2013, we introduced the Influmeter, which is based on citizens' voluntary weekly reports on influenza-like symptoms and other symptoms. The system was employed consistently throughout the entire period with an average of 700 weekly reports. In time, the Influmeter will contribute with more knowledge of the spreading and disease burden of influenza in the community, including how many fall ill without seeing a doctor.

This year, the influenza vaccination coverage exceeded that observed in previous years. Notably, the number of pregnant women who were vaccinated in their second or third trimester doubled, but also the number of vaccinations given to persons with chronic disease increased by 15%. Furthermore, a small increase was observed in the number of elderly persons aged 65 years or more who accepted the vaccination offer. Additionally, the year's vaccine seemingly provided good protection against influenza A H1N1 among the elderly.

Statens Serum Institut has now sent out reminders concerning lacking childhood vaccination to approx. 6,000 parents to children who by mid-May had reached the age of 2, 6.5 and 14 years, and who lack one or more vaccinations according to the Danish Vaccination Register.

Statens Serum Institut has prepared information for citizens and healthcare professionals alike concerning the reminders, and this information is available at www.ssi.dk/vac. Furthermore, the EPI-NEWS 20/14 issue published in Week 20, 2014, describes the reminder scheme in detail, including the causes of lacking registration of vaccinations. Statens Serum Institut offers telephone advice to healthcare professionals concerning vaccinations and the reminder scheme, but citizens are given advice by phone only on how to access FMK-online and how to register vaccinations.

Parents to children aged 2 and 6.5 years can also register the vaccinations themselves at FMK-online.dk Parents to children who are 14 years old will not generally have access to FMK-online on behalf of their children, unless a State Administration adjudication was made, but the child may obtain access using NEMID from the age of 15 years.