Occurrence of Fusobacterium necrophorum in Denmark, 2010-2013

Occurrence of Fusobacterium necrophorum in Denmark, 2010-2013

The syndrome is characterised by life-threatening sepsis with septic thrombophlebitis in the internal jugular vein of the neck and necrotic abscesses in e.g. lungs, liver, bones and joints. In other cases of invasive F. necrophorum infection, the primary focus may be the ear, particularly in younger children, and the intestine or vagina in predisposed elderly persons with cancer.

All test results with findings of F. necrophorum recorded in the period from 1 January 2010 to 31 December 2013 were extracted from the MiBa database and from the laboratory database of DCM Mid-West (Viborg-Herning).

The occurrence (incidence per million per year) of F. necrophorum in blood cultures was at the same level in all regions, Table 1. 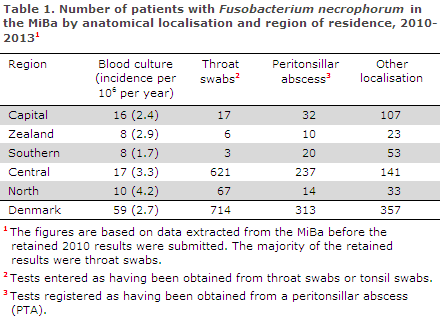 The occurrence of F. necrophorum in blood cultures peaked among 10-29-year-olds, which is the age-group with the highest risk of Lemierre's syndrome, Table 2.

The selective culture plate increases the capacity to detect F. necrophorum. Furthermore, the relatively high number of F. necrophorum cases associated with peritonsillar abscess (PTA) in the region reflects DCM Skejby's research interest in PTA. As many other laboratories do not culture swabs for anaerobic bacteria, the report provides a minimum number for F. necrophorum in tonsillitis/PTA patients. Extrapolating the numbers from the Central Denmark Region to all of Denmark yields an estimated annual occurrence of more than 3,000 tonsillitis patients and 300 patients with F. necrophorum in PTA.

For the 2010 period, a discrepancy of 168 F. necrophoprum registrations was found when comparing MiBa data to data extracted from DCM Mid-West. These specimens had not been submitted to the MiBa from DCM Mid-West as they were retained due to insufficient coding in the local system. No discrepancy was observed in the following years.

For the 2010-2013 period, DCM Central-West recorded a total of 11 positive blood cultures, which was fully in line with MiBa data. Four younger patients had Lemierre's syndrome, one had PTA and a 1-year-old child had a septic infection with primary focus in the ear. The remaining five elderly patients had had primary abdominal infections with or without cancer.

Invasive infection with F. necrophorum is rare, and each of Denmark's 10 departments of clinical microbiology will therefore only have a limited annual number of cases. MiBa can be used as a reliable source of microbiological data for national studies. To interpret data correctly, it is essential to be aware of local differences in diagnostic practice.

The precise clinical definition of Lemierre's syndrome has varied with time and between studies, but includes invasive infection with F. necrophorum and a primary focus in the head and neck region. Invasive infection with the primary focus in other anatomical locations is in contrast to Lemierre's syndrome - seen in elderly, already impaired patients.

F. necrophorum can cause or contribute to tonsillitis and PTA. A Danish study showed that F. necrophorum was the most frequently identified bacterium in cultures from PTA, and it was more frequent than e.g. haemolytic streptococci, group A. Throat swabs cultured for F. necrophorum in a selective anaerobic Fuso plate will facilitate the diagnosis and treatment of more patients already at the tonsillitis stage, and may possibly reduce the occurrence of PTA, not to mention Lemierre's syndrome. F. necrophorum is not considered part of the normal flora, but studies have detected very low concentrations of F. necrophorum in the tonsils of healthy persons.

Normally, throat swabs are only tested aerobically. General practitioners can probably prevent some cases of PTA and Lemierre's syndrome by being aware of F. necrophorum in 10-30-year-olds with tonsillitis and, consider when to request for anaerobic culture of throat swabs by their local DCM.

There are no evidence-based recommendations for the treatment of tonsillitis or PTA in which F. necrophorum has been detected, but the bacterium is susceptible to metronidazole, clindamycin and penicillin, and combination therapy is widely used. F. necrophorum is resistant to macrolides, which should therefore not be used in the treatment.(S. Bank, L.H. Kristensen, K.M. Søby, J. Prag, Department of Clinical Microbiology, Central-West, M. Voldstedlund, Department of Infectious Disease Epidemiology, Statens Serum Institut. The departments of clinical microbiology have provided data from MiBa and contributed to the MiBa collaboration)