Diarrhoeagenic E. Coli 2000-2012
Prevention of hepatitis A - advice and guidance collected in a new guideline

Diarrhoeagenic E. coli (DEC) are divided into main groups on the basis of the clinical picture they cause, and they are characterised by different virulence factors.

The best known is probably verocytotoxin-producing E. coli (VTEC) which has caused multiple outbreaks, Table 3. VTEC produces one or two verocytotoxins (VT1 and/or VT2) and causes gastroenteritis, often with bloody diarrhoea. The most serious complication of VTEC is haemolytic uraemic syndrome (HUS). Due to the risk of severe complications, VTEC — as the only DEC — along with HUS cases are individually notifiable on Form 1515. In addition to VTEC, another five DEC groups have been defined. Each group is described below. 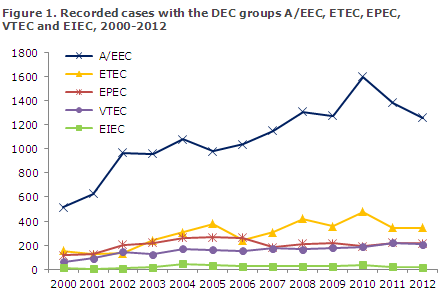 The number of recorded DEC cases has increased steadily as the use of routine diagnostics has gained a stronger foothold, starting in 1997. Including the intimin-producing E. coli, DEC has thus been the second-most frequently occurring pathogenic intestinal bacterium group, following Campylobacter, since 2003. In the 2003-2012 period, an average of 1,201 annual cases of intimin-producing E. coli were recorded, 341 ETEC cases, 225 EPEC cases, 175 VTEC cases and 28 EIEC cases, Figure 1. EAggEC was not included as they were not included in the routine diagnostics of intestinal bacteria in this period.

The mean incidence varied between the various DEC groups according to age, Table 1. 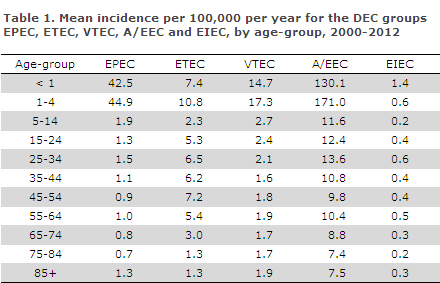 The mean incidence varied between the various country areas. For EPEC, ETEC and VTEC, the incidence was highest on Funen and in North Zealand, Table 2. 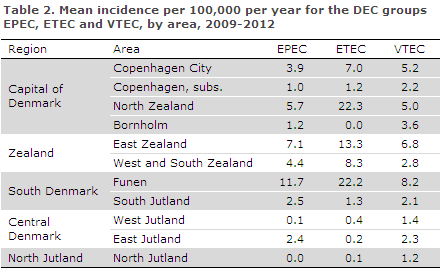 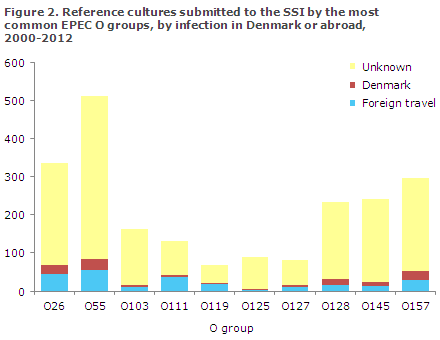 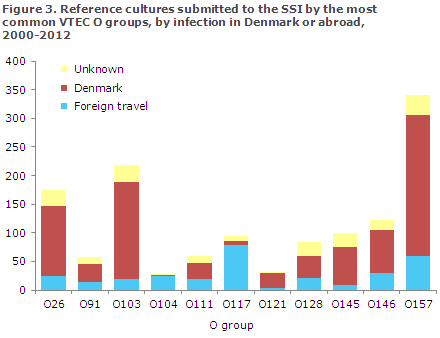 As presented in Figures 2 and 3, the majority of VTEC infections - barring VTEC O117 - are acquired in Denmark, whereas information on foreign travel is lacking for most EPEC infections.

Since 2003, the SSI has recorded a total of 11 DEC outbreaks. Eight of these were food-related. Furthermore, DEC was detected in two outbreaks caused by contaminated drinking water, Table 3.
In February of 2012, four persons were infected with sorbitol-fermenting O157:H- (SF O157:H-) which is an aggressive subtype of O157. HUS was seen in two of these persons. In the autumn of 2012, Denmark recorded its first general food-related outbreak with HUS cases caused by VTEC O157:H7. The source of the outbreak was probably contaminated minced meat, EPI-NEWS 45/12. 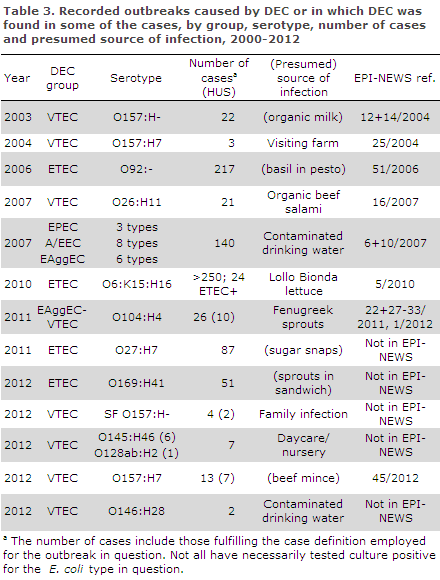 In addition to the cases presented in the table, three persons were infected with the same VTEC O145:H- in 2012 without this leading to an actual outbreak investigation.

Presumably, the increase in DEC diagnosing in the period is primarily due to increased diagnostic activity. We assess that differences in incidence between areas are primarily caused by differences in diagnostic practices, i.e. referral criteria and choice of methods.

As described above, a practice in which all stool samples were tested for DEC would lead to a calculated extra number of DEC cases in the order of 1,900 in 2012 for the three DEC groups.

The Danish Society of Clinical Microbiology (DSCM) and Statens Serum Institut recommend that all patients below the age of seven years with diarrhoea, patients with diarrhoea associated with foreign travel and patients with bloody diarrhoea — regardless of their age — be tested for DEC using molecular biology diagnostics. It is important that the person submitting the samples state the clinical information on any bloody diarrhoea and recent foreign travel, and any suspicion of food-related infection so that infection tracing may be initiated early and secondary infection may be prevented.

The recorded ETEC outbreaks were exclusively found owing to extraordinary submission of Danish acquired ETEC isolates from individual departments of clinical microbiology or in connection with notification of suspicion of food-related outbreaks and subsequent typing of the submitted isolates. Note that in all of the outbreaks, barring the O157 outbreak in 2012, the possible sources are foods that are not normally heat-treated. In the remaining outbreaks, contact infection (person-to-person or contact with infected animals) is the most likely source.

The Danish Health and Medicines Authority has updated the guideline on hepatitis A (her indsættes nedenstående link) so that all information on preventive measures against infection during travels, at home and in institutions is now available in a single publication.

The guideline includes measures to avoid infection in homes and other places where several people share housing, and it provides instructions for good hygiene in daycare and homecare facilities. The guideline also brings changes. Thus, the use of passive immunisation in the form of immunoglobulin is no longer as widely recommended as was previously the case.

Several effective hepatitis A vaccines are being marketed and the guideline presents their posology and degree of protection and the precautions relating to pregnant women. Specific recommendations are provided regarding which groups of persons should receive preventive treatment (prophylaxis) before or after exposure to infection risk at home, in institutions, at work and during travels. The guideline also stipulates what should be done in case of a single case of infection and in case of a hepatitis A outbreak in daycare institutions. That is if infection spreading has been established within the institution.

The target group of the guideline is hospitals, the practice sector, medical officers of health and the municipal health service and administrators as well as employees and employers in professions at risk of infection.
(Danish Health and Medicines Authority)