2012 saw a total of seven notified cases of acute hepatitis C virus (HCV) infection, five men (aged 34-50 years) and two women aged 24 and 30 years, respectively. Four were infected via intravenous drug use (IDU), three men and a woman; one case was notified as infection by sharps accident while working as a piercer, and in one case infection was by homosexual contact abroad. In the latter case, the person was concurrently infected with HIV and syphilis. In one case, the source of infection was unknown. 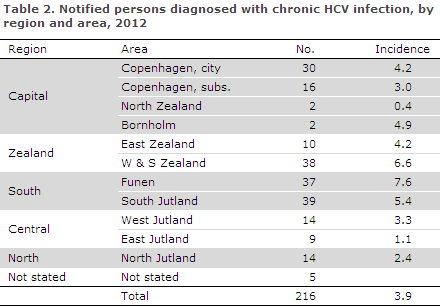 Transmission
A total of 182 (84%) cases were of Danish origin and 34 (16%) were of foreign origin; the foreign cases were distributed on 24 nationalities.
Mode of infection is presented in Table 3.

Twenty persons (10%) were notified as nosocomially infected. This group included seven Danes who were all infected in Denmark via blood products before the introduction of HVC donor blood screening in 1991. The 13 immigrants were all infected in their countries of origin prior to their arrival to Denmark. One person stated having been infected in connection with a needle-stick accident while working as a cleaner. This, however, was not verified. Five persons, all adult immigrants, were notified as having been infected at birth in their countries of origin.

Commentary
HCV infection rarely presents as an acute illness; it is generally diagnosed once the chronic stage has been reached. The notified cases of chronic HCV infection are therefore mainly due to infection many years earlier, which is associated with a risk of late sequelae such as chronic liver injury. One exception to this pattern is the HIV-positive MSMs who attend control visits as outpatients at infectious medicine clinics.

These men are regularly HCV-screened and will therefore be diagnosed long before experiencing any symptoms of chronic HCV infection. In 2012, only one person was notified with HCV infection acquired via homosexual contact, following diagnosis made at such a control visit. However, the Department of Infectious Disease Epidemiology has knowledge of a minimum of ten HIV-positive MSMs who were diagnosed with HCV infection in 2012, but who have not yet been notified.

It seems likely that the manual notification procedure with no link to laboratory results may explain the lacking notifications. Nevertheless, physicians are encouraged to meet the statutory demand concerning notification of all cases of HCV infection, as national monitoring efforts are presently based on such notifications.

Acute HCV cases, particularly among HIV-positive MSMs, are reported more and more frequently abroad. There seems to be an association with sexual practices involving damage to mucous membranes and therefore a risk of bleeding. The patients were infected in European cities, particularly Berlin, but infection also occurs in Copenhagen.

As systematic HCV screening of other potential risk groups – such as immigrants from highly endemic countries – is not performed, the share of diagnosed and notified persons for these groups is presumably presently underreported.

The treatment options for HCV infection are continually being improved, and it is therefore essential that HCV-infected patients be referred to a specialised department. Persons with an increased ALAT level of unknown cause should therefore be screened for HCV infection.
(B. Søborg, S. Cowan, Department of Infectious Disease Epidemiology)