Tularaemia – also known as "rabbit fever" – runs an acute course characterized by high fever and adenitis. If left untreated, the condition can progress into a protracted chronic state characterized by persistent adenitis and, in some cases, abscess formation. The condition can be diagnostically challenging as the aetiological agent, the Francisella tularensis bacterium, most often will not be detected using conventional culturing methods. The infectious inoculum is extremely small. The condition occurs endemically across most of the Northern Hemisphere, and tularaemia cases have been detected in all parts of Denmark, even though it is likely that the condition is markedly underdiagnosed.

F. tularensis is a small facultative intracellular Gram-negative coccobacillus. The two primary human pathogenic subspecies are F. tularensis tularensis (type A), a highly virulent type only found in North America, and the more lowly virulent F. tularensis holarctica (type B), which is found across the entire Northern Hemisphere including all of Denmark, EPI-NEWS 06/09, but with a particularly high incidence in Northern Scandinavia and Eastern Europe.

The incidence of type B tularaemia is particularly high in areas with many lakes and streams. Mice, lemmings, hares and beavers and a range of other minor rodents play an important part in maintaining and spreading the infection within an area.

Humans are normally infected either:

Human-to-human transmission has not been observed. The incubation period is typically short, 3-5 days (range 1-21 days).
Five manifestations of tularaemia have been described, depending on the route of transmission.

In Denmark, the overwhelming majority of cases are of the ulceroglandular type, caused by vector-borne infection or direct inoculation on the skin. At symptom onset a small and inconspicuous papule/pustule/sore is often found at the inoculation site, in some cases with localized reactive hyperaemia. Concurrently, sudden-onset high fever, chills, myalgia and headache are observed. With time, considerable regional lymphadenitis develops. The sore heals spontaneously forming a small scar. In the European type (type B) mortality is low and the systemic symptoms are typically milder and self-limiting within days, whereas the mortality associated with untreated type A infection ranges from 5 to 15% (up to 60% in pulmonary tularaemia) but decreases to 2% with timely initiation of relevant management.

Persons with cellular immune deficiency are at increased risk of developing complications. In untreated cases lymphadenopathy will progress over the subsequent weeks, in some cases forming an actual abscess, which only heals slowly over a period of months, despite of incision. Persistent subfebrilia, sweating and fatigue are common.

In the initial stage the bacterium may be detected directly using specific PCR/special culture in pustule/sore scabs from the inoculation site. In later stages of the disease, the bacterium may only be detected in discharge/aspirated matter from an affected lymph node. Specific PCR and culturing using special media are performed routinely at Statens Serum Institut, but culturing may also, in some places, be agreed directly with the local DCM.

In some cases, the diagnosis is made by detection of specific F. tularensis antibodies. Seroconversion is seen several weeks after disease onset, and a negative serological test in the acute course therefore does not exclude tularaemia. A titre of ≥ 100 and/or a 4-fold titre increase over 2-3 weeks are considered diagnostic, EPI-NEWS 06/09.

In the 2009-2012 period, 1,359 samples were submitted for tularaemia testing at Statens Serum Institut where a total of seven persons tested positive, figure 1, corresponding to 1-2 persons annually in the period.
Below, we describe these seven tularaemia cases.

Case 1, 2009.
A 40-year-old male treated at an ear-nose-throat specialist practice. No clinical information is available. The patient tested negative for Epstein-Barr virus and Brucella and Bartonella species by serological examination. The tularaemia diagnosis was made on the basis of serology with an antibody titre of 400.

Case 2, August 2009.
A 60-year-old male frequently been exposed to tick bites during trips to Sweden. The patient is referred to a department of infectious diseases due to a central necrotic wound below the right scapula where no tick bite had been observed. Redness resembling erythema migrans was seen surrounding the wound and severe lymphadenopathy was found in the right axilla where an abscess-like process was forming. Early in the course the patient was treated with doxycycline on suspicion of borreliosis. The patient was tested serologically for tularemia using the "tick test battery", which detected F. tularensis antibody titres of 1,600 and ciprofloxacin was added to the treatment.

Case 4, August 2011.
A 40-year-old male saw his GP due to a tick bite on his foot. The patient presented with local ulceration at the bite site and lymphadenopathy in the groin. The patient was febrile and reported influenza-like symptoms. On suspicion of borreliosis the patient was treated with oral penicillin for 14 days. During this treatment, symptoms aggravated. The patient visited the ER where oral dicloxacillin was added to the originally assigned treatment. The patient's condition deteriorated and admission to the hospital was required. Intravenous antibiotic treatment was given during admission. An ultrasound scan was performed of the lymph node in the groin on suspicion of abscess, which was disconfirmed. The patient was discharged on oral dicloxacillin and penicillin, but returned to his GP due to persisting subfebrilia and night sweats. At this point the groin lymph node measured 5 x 8 cm. The patient tested positive for tularaemia by serological testing. Subsequently, tularaemia was confirmed by PCR for F. tularensis made on wound discharge.

Case 5, October 2011.
A 34-year-old male exposed to tick bite while walking in the woods one month earlier. Around the bite site situated immediately above his navel, the patient presented with increasing redness. Penicillin was given initially on suspicion of borreliosis. The patient's condition deteriorated with severe adenopathy in both groins, of which one developed into a suppurative abscess. Next, the patient was treated with tetracycline. The patient was examined serologically using the "tick test battery", which detected an increase in F. tularensis antibody titres with adequate increase after a month. During the acute course, discharge from the groin abscess was collected and tested positive to F. tularensis by PCR.

Case 6, August 2012.
A 68-year-old male was admitted to hospital with a high fever and chills following intermittent and severe headache during 4-5 days. The patient had a sore on the left calf, which was believed to have been caused by an insect bite. The sore was infected and the patient received treatment with intravenous penicillin on suspicion of borreliosis. F. tularensis was detected by PCR performed on sore crust material. After 14 days, significantly increased F. tularensis antibodies were detected.

Case 7, December 2012.
A 17-year-old male had been experiencing lymphadenopathy on the right side of the neck since August. Test results for CMV, EBV, TB and toxoplasmosis were negative. Initially, the patient ran a high fever for five days, and had a small furuncle on the jaw followed by a persisting red mark and regional adenitis. In the following months he experienced persisting adenitis progressing into abscess, night sweats and subfebrilia, which did not respond satisfactorily to incision and penicillin/dicillin treatment. F. tularensis was detected by PCR in abscess material, and the patient was found to be seropositive. Retrospectively it was discovered that during the summer of 2012, the patient had stayed in Sweden where he slept in bed linen which may have contained mouse droppings. 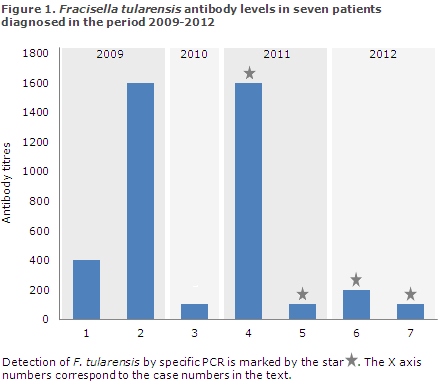 The treatment of acute complicated tularaemia and tularaemia acquired in North America (type A) should be performed by a department specialized in infectious diseases and will typically include an aminoglycoside. Treatment of uncomplicated cases of tularaemia acquired in Europe (type B) is poorly documented, but in retrospective reports ciprofloxacin seems superior to doxycycline. The treatment of choice at Statens Serum Institut is ciprofloxacin tablets (500-) 750 mg x 2 i 14 (-21) days and the second choice is doxycycline tablets 100 mg x 2. Beta-lactam antibiotics, co-trimoxazole and clindamycin have no effect.

Tularaemia is probably an underdiagnosed disease in Denmark. The disease was initially reported in Denmark in 1987, after which an annual 0-4 cases have been diagnosed, EPI-NEWS 38/03, 38/06 and 06/09. As illustrated by the case stories, the diagnosis should be considered in persons with relevant exposure who present with a modest reactive sore/pustule and relatively severe lymphadenitis and fever, and in cases of prolonged "culture negative" lymphadenitis/abscess which does not respond to conventional treatment. Risk groups include hunters and other persons handling wild animals and anyone frequenting the countryside/woods. Central and Northern Scandinavia and also Eastern Europe are tularaemia high risk areas.

(B. H. Jensen, Microbiology and Infection Control, S. Villumsen, Department of Infectious Diseases, Copenhagen University Hospital (Rigshospitalet). We would like to extend our gratitude for the clinical information supplied by the infectious disease departments in Odense, Roskilde and Skejby and by GPs K. Bentzen and E. Steendahl, Copenhagen).

In EPI-NEWS no. 5, 2013 unfortunately a mistake occurred. In the second paragraph it was stated that “IB (Infant Botulism, ed.) is caused by ingestion of Clostridium difficile spores”. The correct sentence should have been “IB is caused by ingestion of Clostridium botulinum spores”. The same error occurred in the news item posted on the SSI webpage on 6 February but was subsequently corrected. The editor apologizes for these errors to the subscribers and readers of EPI-NEWS.