In Denmark, being bitten by a bat is normally the only indication for prophylactic rabies treatment. In case of substantiated suspicion following other animal bites, the animal should first be examined by a veterinary. The veterinary will, if necessary, put down the animal and arrange further investigation.

In other parts of the world, rabies is more widespread. Transmission is caused by the penetrating bite of an animal infected with rabies, or on rare occasions through direct contact between infected saliva and mucous membranes or wounds.

Prophylactic treatment after possible exposure should be discussed with the Department of Infectious Disease Epidemiology, Statens Serum Institut, where human rabies immunoglobulin (HRIG) and vaccine may be ordered by general practitioners at the expense of the Region in question.

Recommendations on post-exposure prophylaxis are presented in EPI-NEWS 37/10, which comprises pre- as well as post-exposure measures.

Post-exposure prophylaxis
In 2012, a total of 169 persons were given prophylactic treatment for rabies animal bites or other mucous membrane contact with animals suspected of having rabies, Table 1.

A total of 80 persons were treated with HRIG in addition to vaccination.
Eleven persons were given prophylactic treatment due to bat bites in Denmark. One of the bats was tested for rabies, and it tested negative.

Furthermore, in Denmark two persons were bitten by a dog which had possibly been imported from Bulgaria. As rabies could not be excluded on such basis, the dog was put down and subsequently tested negative for rabies.

A total of 156 Danes were possibly exposed to rabies abroad, 99 in Asia (including 55 in Thailand and nine in Bali, seven in Sri Lanka and seven in India), 40 in the remaining parts of Europe (including 19 in Turkey), nine in Africa, seven in Central & South America and one in the US, Table 1.

Among the 55 persons who were treated following possible rabies exposure in Thailand, 33 were bitten by dogs, 19 by monkeys and three by cats.

In case of bat bites in Denmark, the bat should be caught, if possible, and submitted for rabies testing. It is important to monitor the occurrence of rabies in Danish bats, and the bite victim may end the vaccination series if the bat later tests negative for rabies virus. The prevalence of rabies among bats in Denmark remains unknown, as only a very limited number of bats are tested.

Possible exposure to rabies abroad was the primary cause of post-exposure prophylaxis, which was observed in 156 (92%) of all treated persons. Among the 156 cases of possible exposure abroad, 55 (35%) were exposed in Thailand, Figure 1. 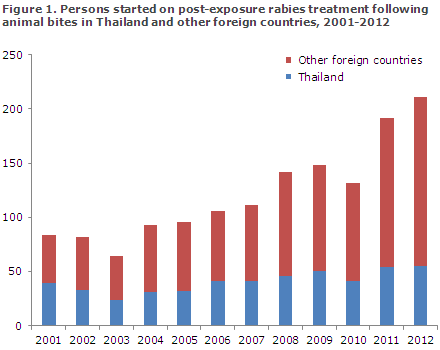 When giving advice prior to foreign travel, it is important to mention the risk of rabies associated with contact to animals. Travellers should be advised to limit contact to animals and to see a physician without delay in case of a bite.

Patients who have received pre-exposure vaccination and who get bittten by an animal do not need immunoglobulin as they have already produced antibodies which simply need to be boosted, EPI-NEWS 37/10.

Rabies is caused by a virus. Two types exist: classic rabies virus and European Bat Lyssavirus (EBLV), also known as bat rabies virus. Classic rabies is endemic to most of East Europe, while only sporadic outbreaks are seen continually in Western Europe. Recently, a major outbreak of classic rabies was observed among foxes in North-Eastern Italy. The outbreak was countered through a massive vaccination campaign.

Illegal import of dogs from third-world countries to Europe continues to pose a problem. In 2012 a case was reported of a puppy which died from rabies in Holland about a month after its owners had bought it in a Moroccan car park. Contact tracing was instigated and more than 50 persons were subsequently identified and started on prophylactic treatment.