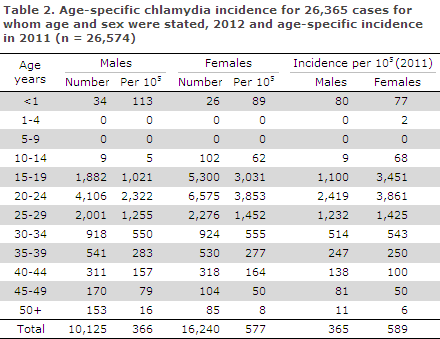 As in the 2009-2011-period, males constituted 38% of the diagnosed cases. This proportion has previously followed a steady, increasing trend from 23% in 1994. 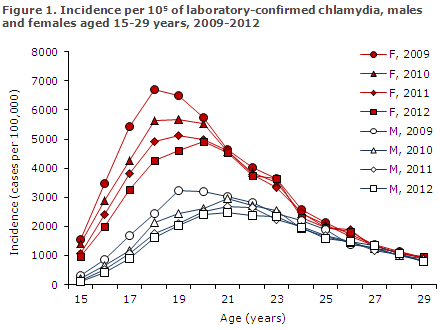 Based on the municipal code of the practice or hospital department where the specimen was obtained, each individual chlamydia case may be ascribed to a specific municipality, part of country or region, Table 3. 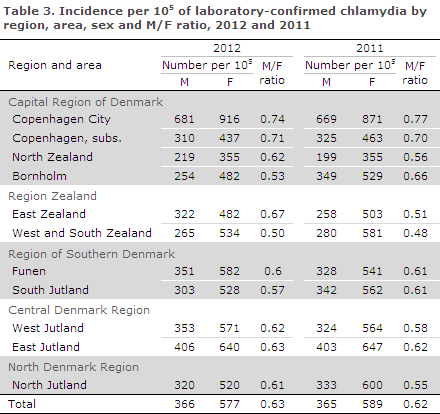 Compared with 2011, the general pattern was that of an increase in the incidence in the City of Copenhagen, on Funen and in West Jutland, and for males also in North Zealand and East Jutland. For both sexes, a decrease was observed in the majority of the remaining areas. The M/F ratio remained largely unchanged.

Urine was used as sample material in 82% of the chlamydia cases from men (79% in 2011). All laboratories reported positive findings in urine specimens. Rectal chlamydia was detected in 123 men (131 in 2011).

Among 19 children under the age of one year with conjunctivitis, for whom the age was stated in months, 13 were aged less than one month and two were three months old. Urogenital chlamydia was detected in ten 13-year-old and 90 14-year-old girls and in nine 14-year-old boys.

As in 2009-2011, the proportion of men among the detected cases had levelled off at 38%, but there is no reason to believe that chlamydia is less prevalent among men than among women. Increased testing of men should therefore be continued. The number of men who had rectal chlamydia detected remained practically unchanged. When rectal chlamydia is found in a man, he should also be tested for syphilis, gonorrhoea, lymphogranuloma venereum (LGV) and HIV, EPI-NEWS 20/2008.
(S. Hoffmann, Microbiology and Infection Control)