The treatment of tuberculosis (TB) in Denmark has been monitored by use of a standard form filled in by the physician/department responsible for the treatment since 2000.

The form is forwarded to the Department of Infectious Disease Epidemiology once the treatment has concluded and includes information on treatment outcome. A standard form for monitoring of TB treatment may be ordered by e-mail: ldr@ssi.dk or phone: +45 32 68 37 44.

The definitions of the relevant TB treatment outcomes are shown in Table 1 of EPI-NEWS 50/10. The outcome "Cured" is only used to denominate patients with culture-positive pulmonary TB, and it presupposes that culture for the M. tuberculosis complex is negative during the final treatment month and at a minimum of one previous culture. Treatment success is the sum of "Cured" and "Completed" treatment. 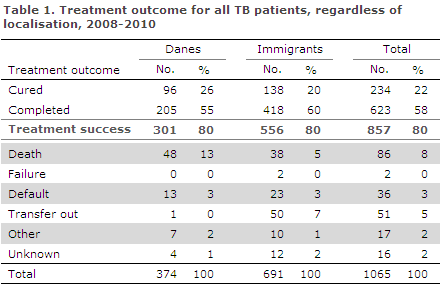 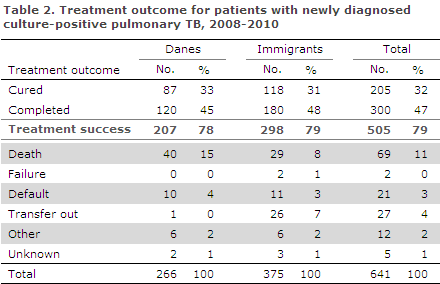 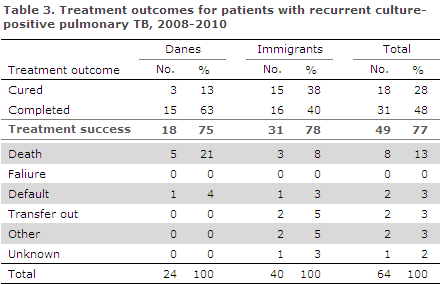 Previous reports have not distinguished between newly diagnosed and recurrent TB, and the numbers are therefore not readily comparable. In the 2005-2007 period, a total of 84% of all patients with culture-positive pulmonary TB were treated successfully, EPI-NEWS 3/11.

Treatment failure was only reported in two cases which both occurred among ethnic Greenlanders with newly diagnosed culture-positive pulmonary TB, Table 2. Both had fully sensitive isolates. One of these cases was renotified with TB in 2012, the other died the same year.

Among the patients notified with newly diagnosed culture-positive pulmonary TB in the 2008-2010 period, 79% were successfully treated, Table 2. Consequently, the WHO objective of an 85% treatment success rate was not reached either for Danes or for immigrants. If treatment success in this target group is limited to those with known outcomes, the overall rate was 81%; 80% for Danes and 81% for immigrants.

If those patients who left Denmark during treatment ("transfer out") are also excluded, the overall treatment success rate in Denmark for the WHO target group increased to 85%; 81% for Danes and 88% for immigrants (as 26 of 27 transfer out patients were immigrants).

In 2011, the WHO's global goals for successful treatment of patients with microscopy/culture-positive pulmonary TB rose from 85% to 90%.

The share of patients with defaulted treatment was low, but this should, in principle, not occur in Denmark, as these patients may potentially contribute to the group of infectious patients in future.

It is encouraging that patients with recurrence of culture-positive pulmonary TB have the same level of treatment success as the same group of patients with newly diagnosed TB, but at the same time it is thought-provoking that one in five Danish patients who are notified with recurrent, culture-positive pulmonary TB dies during treatment. The registration does, however, not distinguish between death due to TB and other causes.

News on the use of disinfectantsin Danish healthcare

Central Infectious Hygiene Unit (CIHU) as recently published a consensus memorandum titled: "Principles for the use of disinfectants in Danish Healthcare".

The memorandum was prepared by infection hygiene experts from across Denmark and has been subjected to a consultation process. The full memorandum is available at the CIHU web page.
(C. S. Jensen, A. Kjerulf, on behalf of the CIHU and the working group)