The 2012/13 season was characterized by a remarkably prolonged period with increased influenza activity, which started and was particularly prominent around Christmas.

From Week 40 in 2012 to Week 20 in 2013, the occurrence of influenza-like illness (ILI) was reported to the sentinel surveillance by a weekly average of 160 GPs. The ILI occurrence was also followed daily through the all-year nationwide surveillance performed by emergency call service physicians.

The monitoring of laboratory-verified influenza was improved considerably in the 2012/13 season as it became possible to collect national Danish data from The Microbiological Database (MiBa: http://miba.ssi.dk). This allowed retrieval of information on the number of persons who were tested for influenza and the number of patients in whom influenza A and B, respectively, was detected.

The occurrence and any changes in the influenza virus were monitored via samples submitted to the national Danish WHO Influenza Centre at the SSI.

The disease burden and its load on the healthcare system were assessed via reporting of the number of patients diagnosed with influenza at Danish intensive care units . Mortality was assessed via vital data from the Civil Registration System .
Furthermore, a new INFLUENZA-NEWS publication was launched featuring new national and regional monitoring reports.

The occurrence of ILI increased in Week 50 and peaked in Week 52 according to both the sentinel surveillance programme and the physician surveillance performed by the emergency call service, Figures 1 and 2. Influenza activity reached a very high level in Week 52.

It is, however, well-known that the consultation percentage in that specific week is overestimated due to fewer planned consultations in the days between Christmas and Year's end. ILI activity followed a drawn-out M-shaped course with increased activity over a total of 15 weeks. 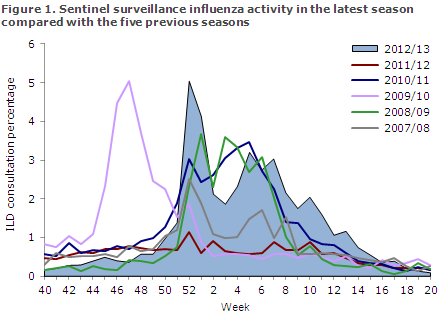 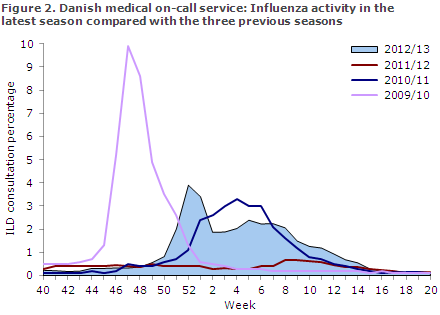 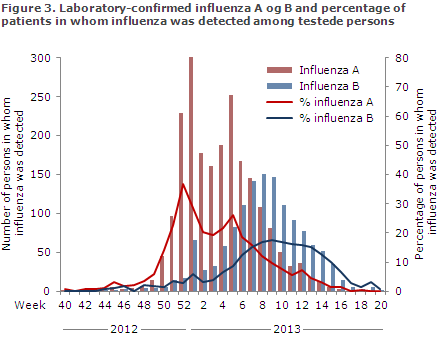 The 2012/13 season saw more detected cases of both influenza A and B than the two past seasons for which it has been possible to retrieve MiBa data. This finding is associated with the fact that the influenza activity occurred over the course of a longer period, Figure 4. The 2012/13 season was an unusually mild influenza season. 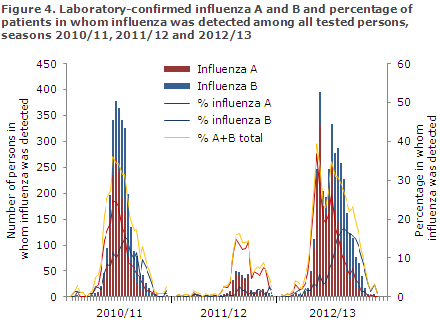 The Department of Virology at the SSI performed PCR-based testing of 1,012 airway samples for more than 20 known airway viruses. RSV (n = 72) and rhinovirus (n = 70) were the two predominant non-influenza viruses in circulation in Denmark in the 2012/13 season, followed by corona virus (n = 37) and human metapneumovirus (n = 20), Figure 5. 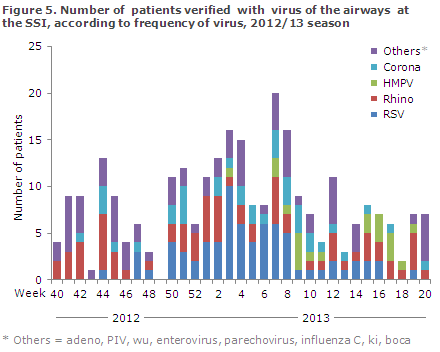 The National Danish WHO Influenza Centre at the SSI offers testing of influenza specimens for antiviral resistance. Furthermore, the Centre is responsible for an antiviral project performed in cooperation with active departments of clinical microbiology who focus specifically on the development of resistance in patients receiving treatment with antiviral medicines at Danish hospitals.

A total of 64 specimens have currently been tested for resistance, and oseltamivir (Tamiflu®) resistance was detected in a specimen from a patient with influenza A H1N1 infection who was receiving antiviral treatment.

Surveillance was active from Week 50 of 2012 to Week 20 of 2013. In this period, a total of 180 patients were admitted to intensive care units with laboratory-confirmed influenza. This exceeded the numbers recorded in the three previous seasons with surveillance, Figure 6.

Information on sequelae was provided for 130 patients. The most frequently reported risk factors were cardiovascular disease (49 patients, 38%) and chronic pulmonary disease/asthma (48 patients, 37%). Only 20 patients were otherwise healthy, 15%. Information on vital status was available for 177 patients. A total of 39 (22%) patients died within 30 days of admission; 30 of 124 patients with influenza A (24%) and nine of 53 with influenza B (17%). 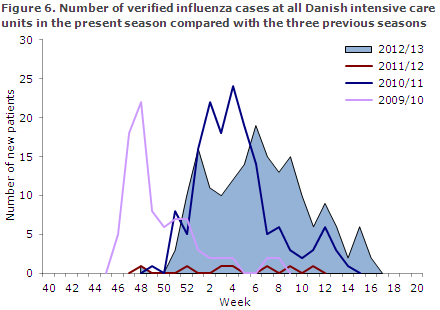 Calculation of excess mortality includes all deaths, regardless of cause. It should therefore be stressed that other factors than influenza may have contributed to the increased number of deaths; e.g. low winter temperatures and the well-known excess mortality among elderly around Christmas and Year's end may be contributing factors.

Seasonal influenza vaccination was offered free of charge to specific groups from 1 October to 31 December 2012 and also to pregnant women in their second and third trimesters until 01 March 2013, EPI-NEWS 39a/12.

The Danish Ministry of Health has calculated that a total of 571,964 persons accepted the offer, including 95,068 chronically ill persons, 26,702 early retirement pensioners, 2,498 pregnant women, 1,694 household contacts to severely immunosuppressed patients and 446,002 persons aged 65 years or above. Among persons above 65 years of age, the overall coverage was 46%; the highest coverage was observed in the Capital Region and Central Denmark Region with 48% followed by the Region of Southern Denmark: 47%, North Denmark Region: 44% and Region Zealand: 42%. The number of influenza vaccinations given to persons who belong to a risk group and the vaccination coverage among elderly persons above the age of 65 years according to area and municipality are available at www.ssi.dk/data.

By linking epidemiological data from MiBa to others from the Danish Vaccination Register, the SSI has demonstrated that this year's influenza vaccine did not provide optimal protection against influenza A (H3N2) in persons aged 65 years and above. A 69% vaccine efficiency against influenza B was recorded. Correspondingly, virological analyses including genetic and antigenetic characteristics of the circulating A H3N2 influenza viruses revealed a poor match between the influenza A H3N2 strains in circulation and the influenza virus included in the seasonal vaccine. The results were published in Eurosurveillance and contributed to the WHO's decision to change recommendations for the virus composition of the seasonal vaccine for the 2013/14 season.

The WHO has changed its recommendation for next year's seasonal vaccine to the following:

In contrast to the majority of the remaining European countries, influenza A (H3N2) was dominant in Denmark, particularly during the first part of the season, whereas a substantial share suffered from influenza B-Yamagata later in the season. Even though influenza A (H3N2) can affect people of any age group, it is often associated with a heavy disease burden in the elderly who are at an increased risk of a severe influenza course.

This is opposed to influenza A (H1N1) which has been dominant in Denmark since 2009 and towards which some elderly have developed partial immunity. This was reflected in the intensive care unit surveillance programme which recorded the highest number of patients since surveillance was introduced in 2009, the majority of whom were 65 years of age or above.

Correspondingly, the same age-group experienced excess mortality as the mortality recorded was higher than that of the preceding three seasons, but lower than the mortality observed in the previous H3N2 season in 2008/2009.

As one of the few countries in which influenza A (H3N2) was dominant, the SSI was able to demonstrate that the vaccine did not provide optimal protection against the viruses circulating in Denmark. This finding was established through virological as well as epidemiological studies.

Shortly after, the Danish observations were substantiated by American findings and contributed to the WHO's decision to change the composition of viral components used for the influenza vaccine in the upcoming 2013/14 season.