On 1 January 2009, human papillomavirus (HPV) vaccination was introduced into the Danish Childhood Vaccination Programme as an offer given to girls aged 12 years born in 1996 or later.

Apart from this special scheme, the age-threshold for free HPV vaccination has been set at 15 years of age, but the government will propose a motion to permanently raise the age limit to 18 years of age in line with the remaining vaccines of the Childhood Vaccination Programme.

Additionally, the government aims to offer HPV vaccination to women born in 1993-98 who have not previously accepted the free vaccination offer.

It is expected that this extra offer will run from the beginning of 2014 to the end of 2015.

The 4-valent HPV vaccine used in the Danish Childhood Vaccination Programme has been marketed in Denmark since 23 October 2006.

Vaccination does not provide protection against all HPV types or against existing HPV infection; routine cervical screening therefore remains of the utmost importance.

It is known that particularly girls from the earlier birth years, i.e. girls born in the 1993-95 period, who are comprised by the catch-up programme, have themselves paid for the vaccinations.

Information on prescription-based HPV vaccination was obtained in connection with the establishment of the Danish Vaccination Register. Such vaccines are counted as part of the report in line with vaccines settled by GPs with the National Danish Health Insurance.

Vaccination coverage was calculated on the basis of person-identifiable data from the Childhood Vaccination Database.
Data for the calculation of the vaccination programme's coverage were collected as per 10 January 2013.

There is a 2-3 month lag from a vaccination is performed until it is recorded in the Childhood Vaccination Database. Vaccinations administered after mid-November 2012 are therefore not included in this report.

Coverage of the temporary HPV vaccination programme for women born in 1985-92 was calculated on the basis of data collected directly from the National Danish Health Insurance. Coverage includes vaccines administered before or on 24 February 2013.

Vaccination of girls born in 2000 had not been concluded when the data were analysed and therefore, expectedly, shows a lower coverage than other birth years.

Despite an increasing trend, the area with the lowest coverage remains the City of Copenhagen (i.e. the Municipalities of Copenhagen, Frederiksberg, Dragør and Tårnby), with an overall coverage of 73% for birth years 1993-99.

This trend is both observed for the now concluded catch-up programme and for the standard programme, Table 2. Correspondingly, coverage follows a decreasing trend on Funen, with an overall coverage of 74% for birth years 1993-99. 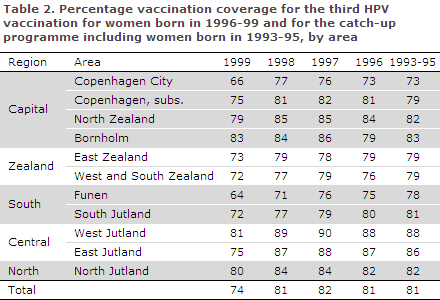 Detailed data on the coverage of the Childhood Vaccination Programme are available via the SSI's webpage at www.ssi.dk/data, EPI-NEWS 17/12. The page allows users to display data on a map of Denmark to obtain a quick overview of the vaccination coverage in municipalities and areas of Denmark.

It is possible to filter the data provided by gender, relevant birth years, municipality and area.

It comes as no surprise that only very few women have received the HPV3 vaccination as the current report contains vaccines given within the first six months of the programme.

In connection with the establishment of The Danish Vaccination Register, information on prescription-based HPV vaccination was obtained in the beginning of December 2011.

Women born in 1985-92 have redeemed prescription-based, self-paid HPV vaccines equivalent to an average of 15% of this cohort being fully vaccinated.

Particularly women from the youngest birth years of the target group have received prescription-based HPV vaccination.

When prescription-based vaccines are included and assuming that these vaccines have been administered equally as first, second and third HPV vaccines, the adjusted coverage for HPV1 rises to 61%, HPV2 rises to 51% and HPV3 to 18%.

Despite good overall HPV coverage among girls in the standard and catch-up programmes, relatively large differences in coverage were observed between areas in the coverage of the third HPV vaccination.

The causes explaining this are not fully known. The Department of Infectious Disease Epidemiology has studied factors that may have an impact on HPV vaccination during the first year of the standard programme.

For girls born in 1996, it was established that – apart from regional variation, i.e. a lower coverage in the City of Copenhagen – a significantly decreased chance of being HPV vaccinated was seen for girls with five or more siblings, girls born abroad and girls whose mothers were younger or older than 25-34 years when the girl was born.

These associations, however, had only limited effect on the overall vaccination coverage. Further studies are needed to establish the causes of lacking HPV vaccination in order to be able to target measures towards specific groups.

The temporary programme for women born in 1985-92 was reported nearly six months after its initiation.

The offer was well received, and more than 225,000 doses of HPV vaccine were given to these women. As expected, the coverage of the third HPV vaccination remains very limited.

Consequently, women in the target group may still receive vaccination within the programme period, but should soon – and before 1 July – receive the first vaccination to ensure that the remaining two vaccines may be given before the end of 2013.

If you cannot initiate vaccination before 1 July, the latest possible date is 1 September 2013. In this case, the first and second vaccination should be given at a 1-month interval and the second and third at a 3-month interval.

Persons who do not receive all vaccinations in 2013 will need to pay for any vaccinations given at a later date.

The Department of Infectious Disease Epidemiology receives many requests regarding precautions in connection with delayed HPV vaccination. It is recommended that all three vaccinations be given within the course of one year.

In case of delayed vaccination, the next vaccine should be given as soon as possible. The vaccination sequence should not be reinitiated.

Overall it is assessed that the introduction of HPV vaccination of girls in the Childhood Vaccination Programme has been well received.

However, it remains essential to focus attention on HPV vaccination to maintain and, if possible, improve coverage in the future.