More than five years have passed since the first conjugated pneumococcal vaccine (PCV) was introduced into the Danish Childhood Vaccination Programme at three, five and 12 months of age.

Following the introduction of PCV-7, the incidence of IPD in small children was halved within a year. The decline in incidence was closely associated with a decrease in IPD caused by the serotypes included in the vaccine.

Vaccinations administered after mid November 2012 are therefore not included in the above report.

Figure 1 shows the age-specific incidence of laboratory-confirmed IPD cases per 100,000 inhabitants before and after the introduction of PCV-7 and PCV-13 into the Childhood Vaccination Programme. 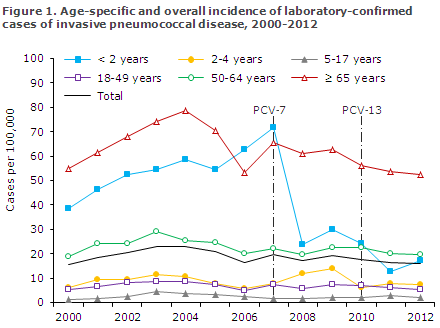 The report is based on national Danish data from the Neisseria and Streptococcal Reference Laboratory, Statens Serum Institut (SSI). An IPD case is defined as a disease episode for which pneumococci, Streptococcus pneumoniae, have been cultured in cerebrospinal fluid, blood or another normal, sterile sampling material.

As from 1 October 2007, submission of pneumococcal isolates from IPD patients to the SSI has been required by law for monitoring purposes, including serotyping.

In a limited number of cases every year, diagnosis is not made by culture, but only by PCR, why serotyping is not possible.

The overall incidence in the population of IPD prior to the introduction of PCV, defined as the mean annual incidence during the eight-year period from 2000 to 2007, was approx. 20 cases/100,000 (a mean 1,056 annual cases).

The 2012 incidence represents a minor increase relative to 2011, when the incidence was slightly below 13/100,000. The average annual number of cases of pneumococcal meningitis in children below five years of age decreased from 19 annual cases in the period from 2000 to 2007 before the introduction of PCV to six in 2012.

For IPD caused by the serotypes included in the PCV-7, the incidence in the < 2 years age group decreased from approx. 36/100,000 cases before PCV to less than one case per 100,000 in 2011, and the incidence has subsequently decreased further, as no cases were observed in 2012.

Among persons above 65 years of age, the overwhelming majority of whom may be considered unvaccinated, a significant decrease in IPD incidence has been observed from approx. 66 cases/100,000 in the eight-year period from 2000 to 2007 before the introduction of PCV into the Childhood Vaccination Programme to approx. 53/100,000 in 2012.

The observed decrease in incidence among unvaccinated persons, the so-called herd effect, is presumably achieved because PCV reduces the ability of children vaccinated for the serotypes comprised by PCV to serve as carriers and thereby reduces the circulation of vaccine serotypes in the population.

Five years after the PCV-7 was introduced, PCV-7 serotypes are hardly ever observed in IPD isolates from small children in Denmark. PCV-13 has had a similar effect on the six extra serotypes. However, the data showing this were analysed after a relatively short monitoring period.

This is important to keep in mind as the distribution of pneumococcal serotypes is characterized by natural variation which is unrelated to vaccination.

Data from 2012, however, do show an increased occurrence of non-vaccine serotypes in children < 2 years causing a moderate increase in IPD incidence for this age group.

The increase does not outweigh the overall positive effect of the vaccine.

The PCV coverage is approximately one to two percentage points lower than that of the DTaPIPV/Hib vaccine which is given concurrently.

The reason for this difference is unknown, but the overall coverage is in line with that observed in previous years, EPI-NEWS 21/12.