There were a total of 122 notified cases of Legionella pneumonia (LP) with symptom onset in 2011. Among these, 85 cases were laboratory-verified as described in EPI-NEWS 40/09. The median age was 63 years (range 17-92), and 75 (61 %) were males. For 48 patients, a minimum of one predisposing factor/condition was reported; 14 had no known predisposing factors; and in 60 cases, information on predisposition was missing or the risk was unknown. A total of 84 cases were infected in Denmark. Infection categories are presented in Table 1 and geographical distribution in Table 2. 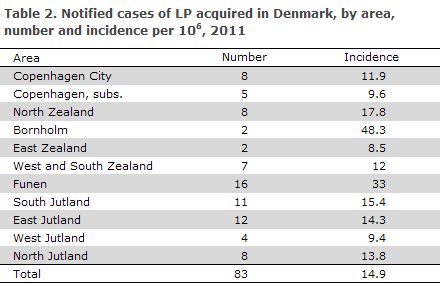 Cases acquired in the healthcare sector

A total of 11 cases of presumed or certain infection via the healthcare sector were notified: eight from hospitals and three from nursing homes. Of these cases, five were culture-verified. Five died in connection with the legionella infection. Water sample analysis supported the suspicion of infection in only one of the cases.

In a total of 60 cases with presumed community-acquired infection, 26 cases were culture-verified. In eight cases, samples from the water supply of the patient's home was known to have been analysed. In five of these, the typing results from the water sample isolates and the patient isolates matched, and the source of infection could thus be confirmed. A total of three persons are believed to have been infected at work, all three in Denmark; only one of these was culture-positive.

A total of 35 cases were presumably infected abroad and three while on vacation in Denmark, Table 3. Among these, 32 were reported to the European Center for Disease Prevention and Control (ECDC). A total of 15 cases were culture-verified, including a case of L. longbeachae (Spain). In two of these cases, typing results from the water supply of the hotels where patients had stayed confirmed the source of infection. Three Danes were involved in three outbreaks: one in Thailand counting a total of six cases, one in Italy counting a minimum of six cases (an outbreak in which tourists had lived at different accommodations), and one in Austria counting two Danish cases (one occurring in 2012).

2011 saw a total of 120 laboratory-confirmed LP cases (culture, LUT, titer increase or PCR) including 35 cases which were only confirmed by PCR (including four non-pneumophila). All 120 cases were notified. Legionella was isolated by culture from 53 patients; from one patient both L. bozemanae and L. pneumophila serogroup (sg) 6 were isolated. The isolates were distributed as follows: 36 L. pneumophila sg 1 (21 Pontiac and 15 non-Pontiac), six sg 3, four sg 6, one sg 10, three L. pneumophila which could not be serogrouped, three L. bozemanae and one L. longbeachae.

The distribution on serogroups was approximately equivalent to that of previous years. Serogroup 1 comprised between 64% and 73% of all culture-verified cases over the past five years (on average 67%) which is a lower share than that observed in other countries. In Europe, sg 1 comprised 86% of all culture-verified cases in 2010 (ECDC Surveillance Report), but only 64% in Denmark. The high share of non-serogroup 1-infections means that the sensitivity of L. pneumophila urinary antigen test (LPUAT) is only approximately 60% in Denmark (63% in 2011 based on data from the national biological database (MiBa)). The rapid tests (immunochromatographic tests) have a lower sensitivity than the ELISA-based methods, particularly for other serogroups than 1 and some subgroups of sg 1 (non-Pontiac).

Today, DNA-typing of L. pneumophila is nearly exclusively done by a consensus SBT in which seven gene loci are sequenced (flaA, pilE, asd, mip, mompS, proA and neuA). Each allele is assigned a number, and every combination (allele profile) is assigned a sequence type (ST), e.g. the ST 1 has the profile 1,4,3,1,1,1,1.

Over the past 2-3 years, the SSI has attempted to type all clinical isolates and all epidemiologically related environment isolates. In 2010 and 2011, 93 clinical L. pneumophila isolates were DNA-typed, and 51 different sequence types were detected. Sixteen of these were only detected in Denmark or were detected for the first time in Denmark. This is thus a typing method that has a high discriminatory power and may therefore be used for epidemiological investigation. Worldwide, a total of 1,333 different sequence types have currently been detected. The most common types in Denmark are ST 1 (N=16), which is also the most common type in the rest of the world, followed by ST 42 (N=7), ST 93 (N=5) and ST 37, 82, 87, 845 and 931, each with three cases. The considerable diversity in the Danish L. pneumophila isolates confirms that the great majority of cases are sporadic and epidemiologically independent cases. Some types, however, are not sporadic; e.g. the three ST 931 isolates (L. pneumophila serogroup 1, subgroup Bellingham) are all from the Kolding area. The same sequence type was also detected in water samples from the area, but has so far never been seen anywhere else neither in Denmark nor in the rest of the world.

The number of patients with Legionella pneumonia in 2011 and their distribution on the categories healthcare sector/community/travels is largely in line with previous years. The same applies to the share of culture-verified cases and to the serogroup distribution observed.

Denmark still has the highest share of culture-verified cases in Europe (and probably in the world) (ECDC Surveillance Report.) This is the case because Denmark's DCMs try to culture from PCR-positive samples or send these for culture to the SSI. Thanks to the many isolates Denmark has the highest confirmed Legionella diversity in Europe both with regard to different species/serogroups and DNA sequence types. In Denmark, L. pneumophila urinary antigen tests (LPUAT) has a lower sensitivity than that stated in the majority of publications, as approximately 40% are false negatives; this applies particularly to the immunochromatographic methods.

18 November 2012 will see the celebration of the fifth European Antibiotic Awareness Day; a joint European initiative in which 37 countries participate (www.ecdc.europa.eu).
The European Antibiotic Awareness Day is an annual event designed to increase awareness of the appropriate use of antibiotics. This year the poster "Many infections pass without antibiotics" and the webpage "www.antibiotikaellerej.dk" (in danish) have been prepared to mark the day. The material targets patients in general practice and was prepared in collaboration between the Danish Medical Association, the Danish College of General Practitioners, the Danish Health and Medicines Authority, the Danish Ministry of Health and the Statens Serum Institut.