Creutzfeldt-Jakob disease (CJD) is a fatal neurodegenerative disease with three subgroups: sporadic, hereditary and acquired (iatrogenic and variant CJD). The occurrence of CJD is approx. 1-2 per million persons per year. Denmark has seen no notified cases of hereditary or iatrogenic CJD since the disease became notifiable, and variant CJD (vCJD), associated with mad cow's disease, has not been found in Danish patients.

Post mortem brain autopsy or biopsy are the only methods by which the CJD diagnosis may be determined with certainty. If the patient has not been autopsied or is still alive, a combination of criteria may assist in reaching a probable or possible diagnosis. Criteria for the classification of sporadic CJD are presented in Tables 1 & 2.

CJD became notifiable on 1 May 1997, EPI-NEWS 10/97 (not avariabel in english). Physicians treating a patient with suspected CJD are required to report the case using Form 1515. On reception, the Department of Infectious Disease Epidemiology, SSI, sends a specific CJD questionnaire to the physician to gather clinical information about the disease course and supplementary clinical measures. The questionnaire may also be downloaded at www.ssi.dk and forwarded to the Department of Infectious Disease Epidemiology, SSI, along with Form 1515.

Figure 1 shows the number of confirmed, probable and possible cases of sporadic CJD observed from 1997 to 2011. The figures are recorded by year of death. The occurrence of sporadic CJD has been relatively stable throughout the period with an average of seven (range 4-12) annual cases. The M/F ratio was 1:1 (57 males and 50 females). The mean age at death was 66 years (range 40-88 years).

A more detailed analysis of Danish cases of sporadic CJD in the 1997-2008-period was published in "Eurosurveillance" in April 2012. 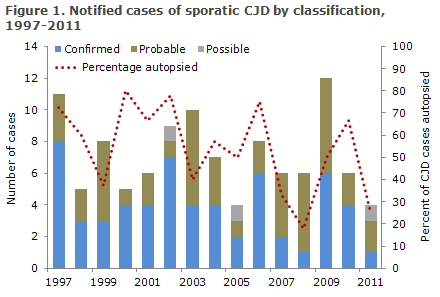 As described above, post mortem brain autopsy or biopsy are the only methods by which the CJD diagnosis may be determined with certainty. On average 54% of the patients notified with CJD were autopsied and classified as Confirmed; the remaining were classified as Probable or Possible CJD cases. 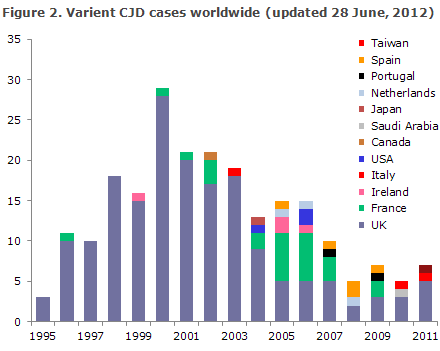 CJD is a rare disease which is difficult to diagnose. Consequently, suspected cases should be investigated thoroughly and any relevant tests and examinations should be performed.
Furthermore, is it important to autopsy suspected cases of CJD, as the diagnosis may only be confirmed through neuropathological examination.

Surveillance of bovine spongiform encephalopathy (BSE) in Denmark comprises passive as well as active surveillance, EPI-NEWS 26-33/04. Since active surveillance was implemented in January 2001 more than two million cattle have been tested, Table 3. In 2009, surveillance was amended to testing of all cattle above the age of four years, regardless of category. Subsequently, surveillance was amended once more as per 1 July 2011, when the age for testing of slaughtered cattle was modified to test above six years of age, while risk category animals are still tested if the animal in question is older than four years of age. Risk animals include fallen sick cattle, emergency slaughtered cattle, any cattle which were found to be sick during the live control at the slaughterhouse (AM animals) and animals from farms with a positive case of BSE, or from farms under suspicion of BSE and which have therefore been placed under official movement restrictions (OT animals).

In 2000, before active surveillance was initiated, the first case of BSE in Danish-born cattle was detected. So far, a total of 15 cases of BSE have been found in Danish-born cattle in Denmark; in addition, three cases in exported cattle have been observed. The most recent case of BSE was detected in November 2009 in a 14-year-old animal born prior to the latest tightening of the feed ban in January 2001.

On 26 May 2011, Denmark was recognised as a country with "negligible BSE risk" at the World Organisation for Animal Health (OIE) general assembly. Only about a dozen of countries worldwide have been recognised this coveted status, and Denmark is therefore in the best possible category with regard to the fight against BSE. Denmark was recognised this status owing to the fact that we meet the OIE requirements regarding surveillance, feed ban and the fact that all Danish BSE-infected cattle were born more than 11 years ago.

In 2004 the expectation was that Denmark would see only a few cases of BSE in the following years, after which the disease would cease to occur in the country. Such expectation has proven to be exact, as only two cases have been detected since 2004. These two cases were found in cattle born in 1995 and 1996, prior to the 1997 feed ban, EPI-NEWS 26-33/04.

Less than 1,100 live cattle born before 1997 are still alive, and it is therefore not possible to exclude entirely that BSE may occur in some of these old cattle. BSE has a mean incubation period of 5-6 years, and as 11 years after the feed ban in 2001 there has been no cases of BSE born after 2001, EPI-NEWS 26-33/04, the feed ban in 2001 has proven to be effective. The number of positive cases in the EU is decreasing rapidly, which shows that BSE is becoming extinct in Denmark as well as in the rest of the EU. In future, BSE surveillance may therefore be reduced further.