Escherichia coli and Klebsiella pneumoniae are a frequent cause of urinary tract infections and septicaemia (blood poisoning). E. coli and K. pneumoniae, which are ESBL (Extended Spectrum Beta-Lactamase)-producing, are resistant to our primary beta-lactamase antibiotics such as ampicillin, cefuroxime, cefotaxime, ceftazidime and ceftriaxone.

The carrier state is a risk factor for subsequent infection with the same strain of ESBL-producing bacteria. The bacteria transfer like other enterobacteria via the faecal-oral transmission route. Infection is futhered by the presence of catheters and other foreign objects and by previous antibiotics treatment. ESBL-producing bacteria are a frequent cause of urinary tract infections in the elderly and in patients with underlying conditions (e.g. cancer or diabetes) both in hospitals and in primary healthcare, but they may also cause pneumonia and septicaemia (blood poisoning).ESBL-producing enterobacteria, particularly K. pneumoniae, have a distinct tendency to cause nosocomial outbreaks.

Such hospital outbreaks may be prevented by contact isolation of colonized patients, which includes emphasis on the importance of good hand hygiene comprising alcohol-based hand disinfectants and frequent cleaning of toilets and bathing facilities with disinfectants. Furthermore, a Danish study has demonstrated that the number of ESBL-producing K. pneumoniae infections may be reduced by changing antibiotics consumption, DANMAP 2010.

In Denmark, there is no continual monitoring of ESBL-producing enterobacteria in humans. A nation-wide prevalence study of the frequency of ESBL-producing E. coli and K. pneumoniae in blood and urine cultures was performed in September and October 2007, EPI-NEWS 11/08, and again in October 2009, EPI-NEWS 15/10. The studies demonstrated that these resistant bacteria were well-rooted in Denmark and that their occurrence was following an increasing trend. A follow-up prevalence study was effected in October 2011.

Twelve of Denmark's 13 departments of clinical microbiology participated in the study in which E. coli, K. pneumoniae and Proteus mirabilis isolates from 12,891 blood cultures, 19,780 urine cultures from hospitals and 16,984 urine cultures from primary healthcare were tested for ESBL production. E. coli was isolated more frequently from the cultures (n = 8,473), while fewer of the patients had K. pneumoniae (n = 1,183). 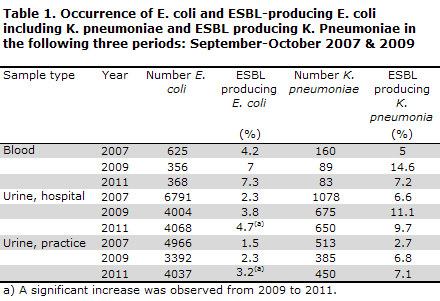 From 2009 to 2011, a significant increase was observed in the occurrence of ESBL-producing E. coli from both practice and hospital urine cultures, while the other observed changes were non-significant.

Even though the prevalence of ESBL-producing enterobacteria seemingly remains low in Denmark, several thousands of patients fall ill due to these bacteria every year, as infections of e.g. the urinary system are very frequent.

The significant increase in the proportion of ESBL-producing E. coli from urine cultures collected in practices is of particular concern as it should be seen as an indicator of a continued, general increase in bacterial resistance even in the community.

Hospital infection with ESBL-producing enterobacteria frequently entails prolonged admission periods with ensuing human and financial costs. The mortality for septicaemia caused by normally sensitive E. coli and K. pneumoniae is approx. 20%, but a 2-3-fold increase may be seen in case of ESBL-producing bacteria and if patients receive non-covering antibiotic treatment. ESBL-producing bacteria are selected by broad-spectrum antibiotics, particularly cephalosporins and fluoroquinolones. The consumption of these antibiotics has increased considerably in Denmark over the past ten years, EPI-NEWS 44/11. The use of these groups of antibiotics should therefore be limited to the necessary minimum.

As ESBL-producing enterobacteria are frequently also resistant to aminoglycosides and fluoroquinolones, a carbapenem is often the only useful antibiotic. Due to the increasing number of infections with ESBL-producing bacteria, the consumption of carpabenems has also increased.

Over the past five years, enterobacteria which are also resistant to carbapenems have been observed in Denmark, EPI-NEWS 10/12. Abroad, e.g. in Greece, this is a major problem. The number of infections with these multi-resistant enterobacteria remains low in Denmark, but is expected to increase.