The laboratory notification system for chlamydia (oculogenital infection caused by Chlamydia trachomatis) receives quarterly data on laboratory-diagnosed chlamydia from clinical microbiology departments and from one clinical biochemical department. In 2011, the number of reported chlamydia cases was 26,617. 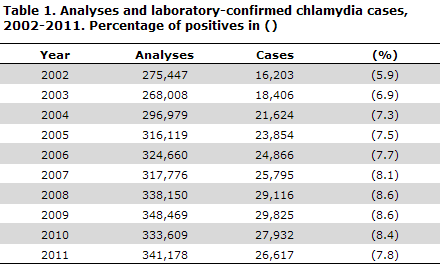 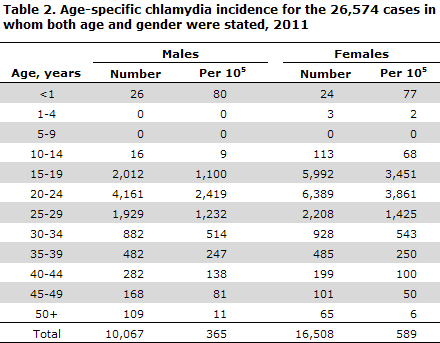 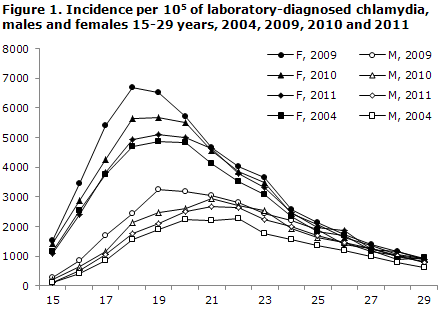 Based on the municipal code of the practice or hospital department performing the sampling, each individual chlamydia case may be ascribed to a specific municipality, part of country or region, Table 3. 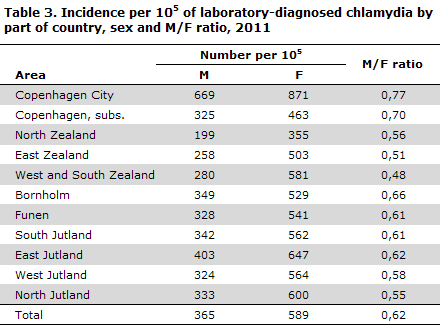 The number of chlamydia analyses was 2% higher in 2011 than in 2010, and the number of detected cases was 5% lower. Both the positive rate and the incidence had decreased. This was a particularly clear trend in 15-20-year-olds of both sexes. Such trend may be associated with a change in risk behaviour thanks to condom campaigns or an increased focus on testing and treatment.

The male proportion of the detected cases remained, as in 2009 and 2010, at 38%, but there is no reason to believe that chlamydia is less prevalent among males than among females. Increased sampling of males must therefore be encouraged.

The number of males who had rectal chlamydia detected remained practically unchanged. When rectal chlamydia is found in a male, he should also be tested for syphilis, gonorrhoea and lymphogranuloma venereum (LGV), EPI-NEWS 20/08.