This report comprises all cases of laboratory-confirmed whooping cough in Denmark in 2020 and 2021, detected by culture, PCR or serology at a department of clinical microbiology or at Statens Serum Institut (SSI). The data analysis is based on automatic registrations in the Danish Microbiology Database (MiBa). A separate report on notified cases of whooping cough in children below 2 years of age is shown below.

The report covers only whooping cough cases verified by laboratory diagnostics. Whooping cough diagnosed on the basis of the clinical picture exclusively is thus not recorded. The detected regional differences in the report may therefore, in part, be due to differences in the use of clinical diagnosis and laboratory diagnostics. The report comprises whooping cough among persons with a Danish civil registration number (CPR number) who resided in Denmark at the time of diagnosis.

In the first months of 2020, Denmark was still affected by the whooping cough epidemic that started in the spring of 2019. January and February 2020 recorded historically high case numbers with 874 and 849 detected cases, respectively. For comparison, 284 cases was the highest monthly number recorded during the previous epidemic (November 2016). At the implementation of COVID-19 restrictions on 11 March 2020, persons with symptoms of airway infections were recommended to stay home and to avoid seeing their doctor unless they really needed to. The number of diagnostic samples taken to test for whooping cough therefore dropped drastically from an average of 349 daily samples in the week leading up to 11 March 2020 (Week 10) to only 26 daily samples in the week after the restrictions entered into force (Week 12). As the amount of samples made declined, so did the number of detected cases, and in April, May and June of 2020, a total of 144, 76 and 32 whooping cough cases were detected. In the rest of 2020 and in all of 2021, the number of detected cases remained very low at an average of 6.7 monthly cases in 2021, Figure 1. The number of samples made has subsequently increased again, but the level of whooping cough cases remains very low; in fact, the lowest observed since monitoring of the condition was introduced in its current form. The low occurrence probably reflects a general effect of the measures implemented to prevent transmission, i.e. the measures implemented in connection with the COVID-19 epidemic as these measures may be expected to affect respiratory infections in general. Furthermore, the increased immunity in the population following the whooping cough epidemic may also have reduced the level of whooping cough transmission in some years after the epidemic, as was seen following the 2016 epidemic. Immunity following vaccination or after a whooping cough episode lasts for 5-10 years. 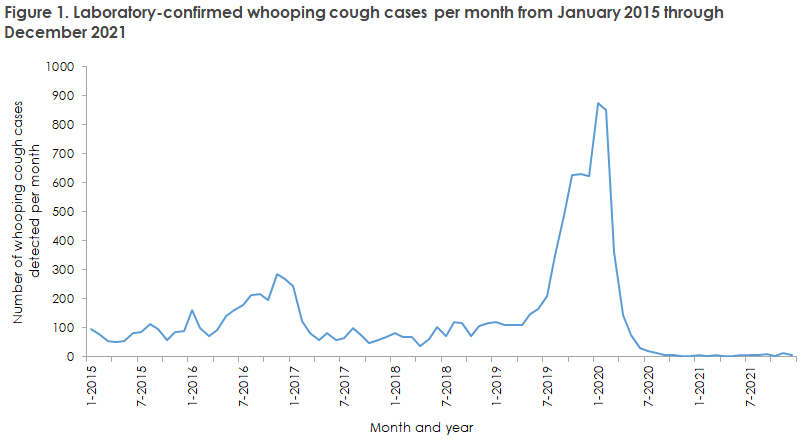 The decline in the number of whooping cough cases detected after March 2020 was pronounced in all Danish country areas, and the 2021 level was also very low across Denmark. In 2021, the highest incidence was recorded on the island of Funen with a total of 19 cases, corresponding to 3.8 cases per 100,000 per year, whereas the lowest incidence was observed on the island of Bornholm with no detected cases in all of 2021.

The number of cases and incidence per country area in the 2018-2021 period are presented in Table 1. The incidence per month for each of the five Danish regions in the period from January 2020 through December 2021 is shown in Figure 2. Data from previous years are available in previous annual reports and issues of EPI-NEWS, and under Monitoring in Numbers, Figures and Maps (Danish language: Overvågning i tal, grafer og kort). 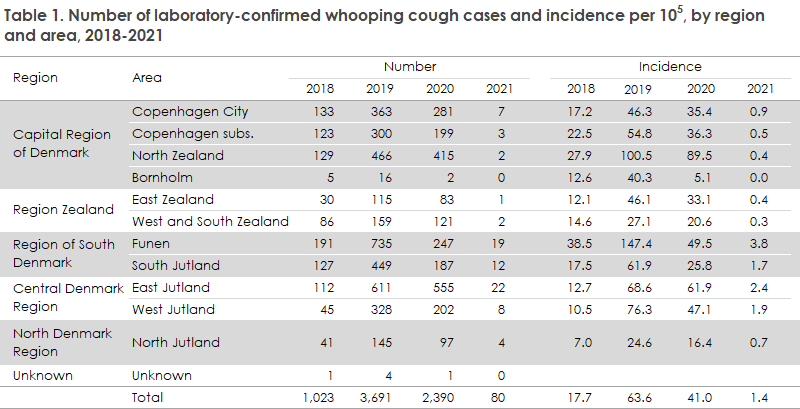 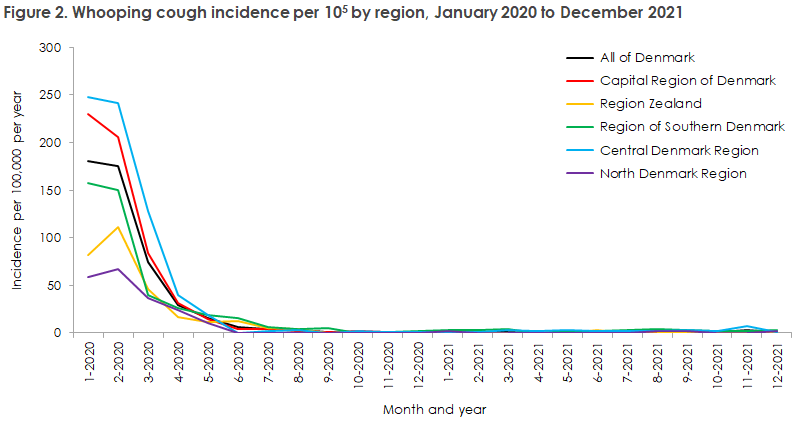 The distribution by age and age-specific whooping cough incidence are presented in Table 2 and Figure 3 (jointly for 2020 and 2021). As in previous years, the highest incidences were observed among young and primarily unvaccinated children below one year (see “Whooping cough in children below two years” below, and children aged 3-4 years and larger children aged 9-16 years, Figure 3. Figure 3 clearly presents a decrease at the 5-6-year age range, corresponding to the effect of the 5-year booster vaccine. The effect of the vaccine wanes gradually in the course of 5-10 years, which is mirrored in the increased incidence among older school children. Furthermore, an increased occurrence is seen among 38-49-year-olds, which is in line with previous years. 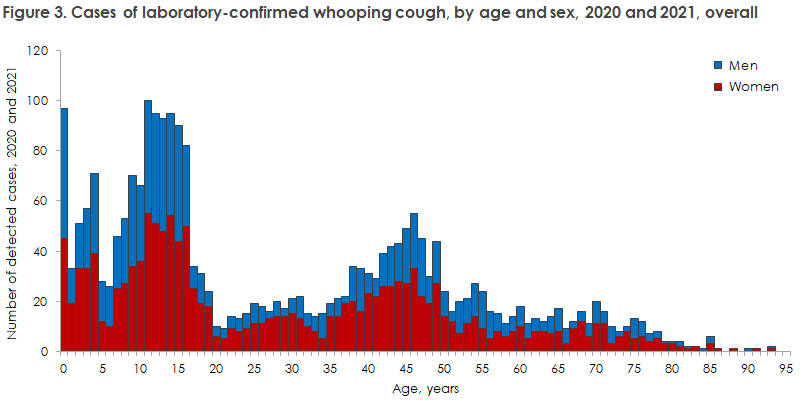 When diagnosing whooping cough, it is important to employ the correct method of analysis depending on the duration of the disease as PCR is possible only in the initial 2-3 weeks of the disease course and as serology may only be used starting a few weeks after symptom onset. Furthermore, serology should be used for whooping cough diagnostics only in persons aged eight years or older as antibodies from whooping cough vaccination at five years of age may interfere with the analysis for a few years after vaccination. A recommendation on choice of diagnostic method is available at the SSI website (in Danish).

The share of whooping cough cases detected by PCR was higher in 2020 than in 2021. This probably reflects that whooping cough received considerable focus in 2020 because of the whooping cough epidemic, why diagnostic analyses were made following a short period with symptoms. In contrast, attention to whooping cough in 2021 was more modest, and whooping cough was therefore detected later in the disease course or convalescence phase. Please note that the distribution presented in Figure 4b is based on a very low case number. 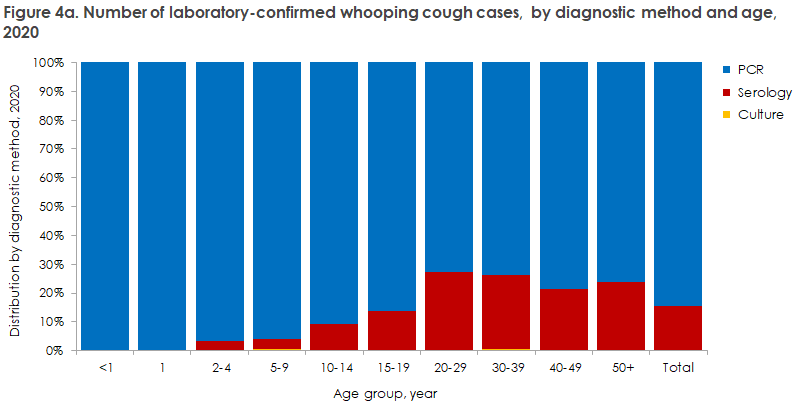 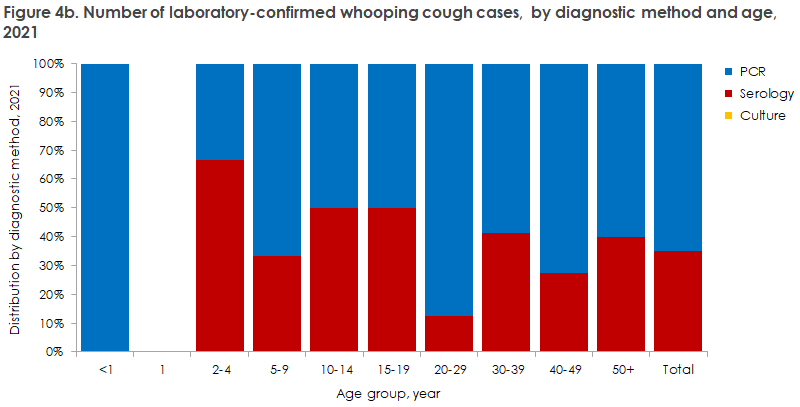 Thanks to the Danish Microbiology Database (MiBa), the number of samples analysed to detect whooping cough can be monitored. Furthermore, the percentage of detected cases (the positive percentage) is monitored, Figure 5.

A strong increase was seen in the number of samples made in the course of 2021. However, this primarily reflects that many of the departments of clinical microbiology employ combined analyses that provide concurrent diagnostics of various respiratory infections, including COVID-19. 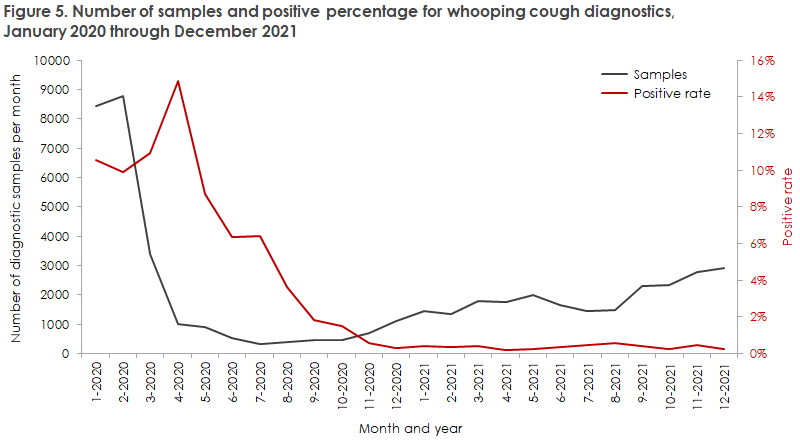 Below, we report the number of notified whooping cough cases in children below two years of age. Whooping cough may give rise to serious disease courses in this age group. Therefore, the infection is individually notifiable on Form 1515, provided the case is laboratory confirmed. Since October 2021, it has been possible to notify electronically using the Danish Health Data Authority’s Electronic Notification System (SEI2), EPI-NEWS 38/21.

A total of 122 cases were notified among children below two years of age in 2020 and 2021. In this report, 2020 (n = 117) and 2021 (n = 5) are presented jointly as the whooping cough occurrence was extraordinarily low throughout 2021. Compared with the latest Annual Report for 2019 (n = 299), a decline has been observed in the occurrence of whooping cough among children below two years of age. This is probably owed to a combination of the measures implemented to prevent infection introduced in the community in mid-March 2020 due to the COVID-19 epidemic, and the fact that whooping cough occurred epidemically in 2019 and early 2020, why more cases were recorded in this period than is normally the case.

The difference in the number of laboratory-confirmed cases (n = 130) among children below two years of age in this report and the number of notified children (n = 122) is due to different registration and reporting practices at the turn of year.

Among the 122 notified children below two years of age, 31 (26%) were unvaccinated, whereas 26 (21%) had received all three primary whooping cough vaccinations, see Figure 6. Compared with the two preceding years, it is clear that the share of unvaccinated children among all whooping cough cases had declined. For comparison, the corresponding share was 39% in 2019 and 41% in 2018. In 2020/2021, the share of children below two years with whooping cough that had received all three primary vaccines (21%) was in line with the 2019 level (19%), but higher than the 14% recorded in 2018.

The decline in the share of cases among unvaccinated people may possibly be explained by the introduction of free whooping cough vaccination for pregnant women in the autumn of 2019 whereby children below three months of age of recently vaccinated mothers have enhanced their antibody-based protection through their mother. Also see “Update on whooping cough vaccination for pregnant women in their second and third trimester” below.

In contrast, the increase in the number of whooping cough cases below two years of age among fully vaccinated people in 2020/2021 (and 2019) may possibly be due to the increased infection pressure during the 2019 epidemic and in early 2020.

Figure 7 presents the age distribution in months and admission (if any) for children below two years of age. As shown, the largest share of admissions was recorded among the youngest children below six months of age. 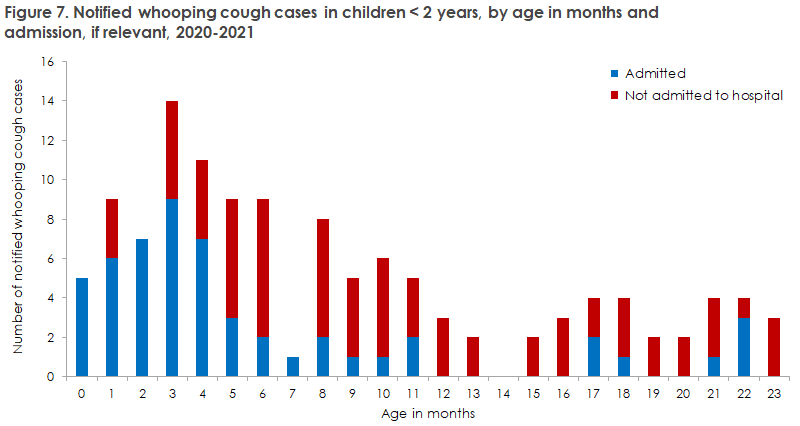 Among the 122 notified whooping cough cases below two years in 2020 and 2021, a total of 53 children (43%) were admitted to hospital for one or more days, Figure 8. Among children who had received none or only one vaccination, a total of 22 of 32 (69%) and 17 of 30 (57%) children were admitted to hospital. As presented, the unvaccinated and partially vaccinated children (one vaccine) have the highest risk of being admitted to hospital. Among children who had received two primary vaccines, seven out of 34 (21%) required admission, and among children who had received all three primary vaccines, seven of 26 (27%) required admission to hospital. Thus, considerable protection against admission is achieved already after two whooping cough vaccinations. It is therefore important to ensure that the vaccines are given as close as possible to the recommended time points at three and five months. 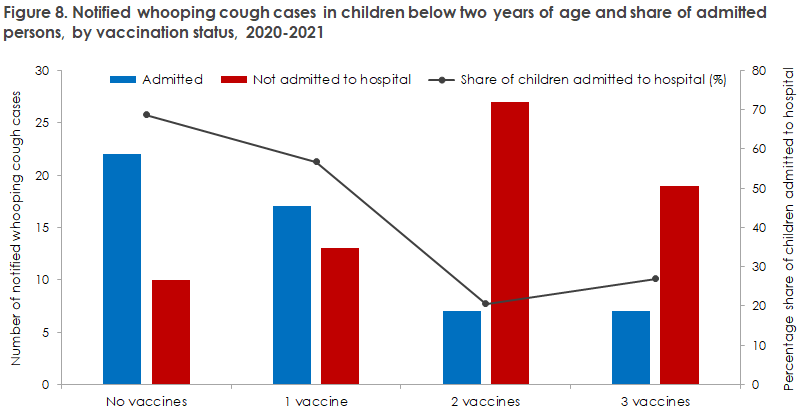 For 2020 and 2021, no deaths were recorded among the whooping cough notifications received. Subsequent searches in the CPR register also failed to record any whooping cough-related deaths in the six months after the condition was detected.

Two children had travelled abroad before falling ill; to Austria and to a country other than Denmark, which had, however, been described as unknown on the notification. It cannot be confirmed if transmission is associated with travel abroad as no source of infection was provided for these two children.

Due to the 2019 whooping cough epidemic, in the autumn of 2019 the Danish Minister of Health decided to introduce a temporary free offer of vaccination against whooping cough for pregnant women in their 2nd and 3rd trimester. The offer was to remain in place until the end of January 2020. However, because of the continued high case numbers, the offer was extended until the end of April 2020. The whooping cough epidemic disappeared following the March 2020 lock-down, EPI-NEWS 20/20 and 27-33/20. As part of the vaccination package implemented by the Danish government during the COVID-19 epidemic, it was decided during the spring of 2020 to extend the offer once more; this time until December 2020. The offer has subsequently been extended two times more, and is now in place until the end of March 2022. Currently, it is being assessed if a health technology assessment should be prepared to provide the knowledge base needed to decide if the offer should be made permanent.

From 1 November 2019 to 23 December 2021, a total of 63,574 pregnant women accepted the offer. The vaccination coverage was particularly high in November 2019, but has since declined to a lower level, Figure 9. Even so, increases were observed in October of 2020 and 2021, probably owed to concurrent influenza vaccination of pregnant women and therefore an enhanced focus on whooping cough vaccination. Based on an assumption of 5,000 monthly pregnant women (corresponding to 60,000 annual births), the total coverage in the period has been slightly below 50% 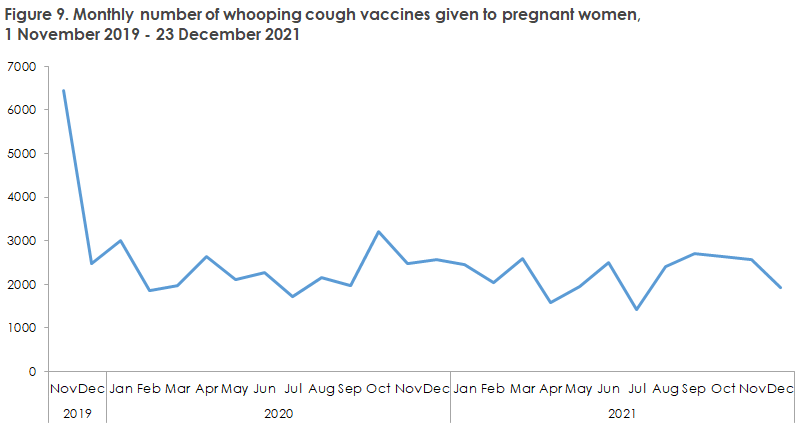 As presented in Figure 10, the highest number of vaccinees was observed in the Capital Region of Denmark and in the Central Denmark Region, which probably mainly reflects a difference in the number of pregnant women between regions. 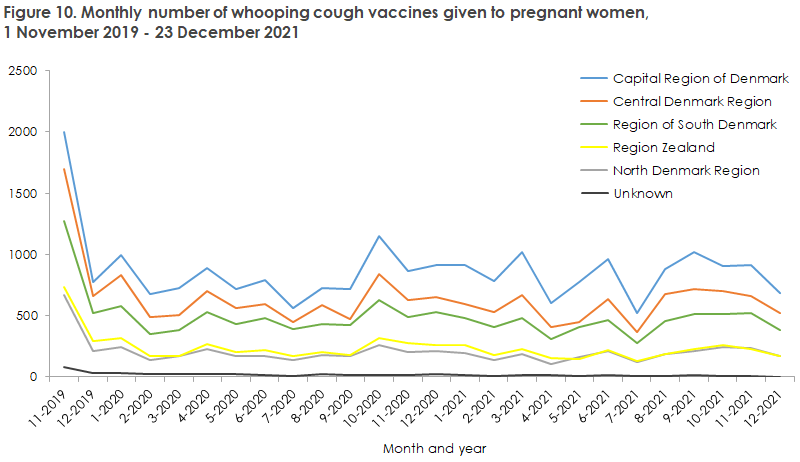 The estimate is statistically significant, but characterised by considerable variation (corresponding to the wide confidence intervals) as relatively few whooping cough cases were recorded in the period, particularly from May to December 2020).