This report comprises all cases of laboratory-confirmed whooping cough in Denmark in 2019, detected either by culture, PCR or serology at a department of clinical microbiology or at Statens Serum Institut (SSI). The data analysis is based on automatic registrations in the Danish Microbiology Database (MiBa). A separate report on notified cases of whooping cough in children below 2 years of age is shown below.

In the summer of 2019, Denmark was hit by a whooping cough epidemic that continued into the first part of 2020. A total of 3,691 cases were detected in 2019, corresponding to an incidence of 63.6 per 105. The latest previous whooping cough epidemics occurred in 2016 (2,089 cases) and 2002 (1,905 cases). Whooping cough epidemics occur naturally at an interval of some years, among others because the immunity achieved through the childhood vaccinations recedes after some years. Even so, the 2019-2020 epidemic was unusual because it reached a higher level than was observed during any epidemic since the mid 1980s. The highest occurrence was recorded in January 2020 when 874 cases were detected, corresponding to an incidence of 180 per 105 per year.

Following the introduction of the COVID-19 restrictions in March 2020, the number of diagnostic samples declined heavily, and the epidemic therefore “disappeared” (EPI-NEWS 17/20). Presumably, the general measures implemented to limit community transmission of infections have now contributed to ending the whooping cough epidemic. Figure 1 presents the number of cases per month from January 2009 through June 2020.

The number of cases and incidence per area in the 2016-2019 period are presented in Table 1. The incidence per month for each of the five Danish regions in the period from January 2018 through June 2020 is shown in Figure 2. Data from previous years are presented under Monitoring in Numbers, Figures and Maps (In Danish language: Overvågning i tal, grafer og kort ). 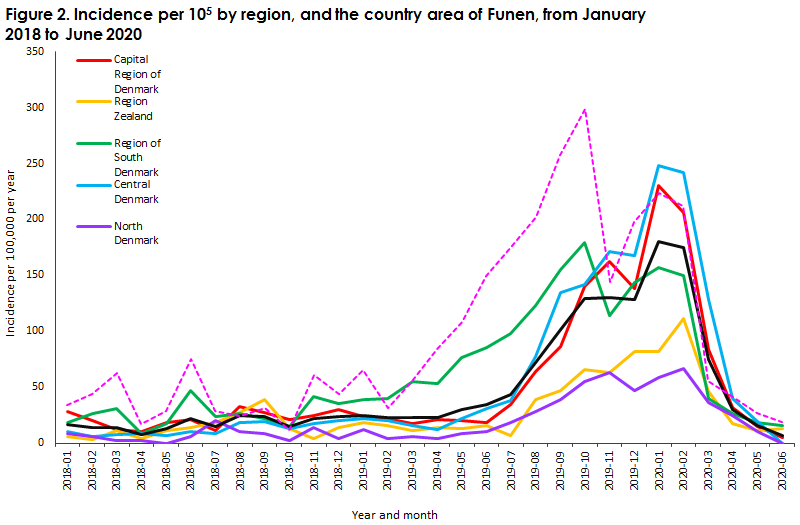 The distribution by age and age-specific whooping cough incidence are presented in Table 2 and Figure 3. The highest incidence was recorded among infants below one year of age (see “Whooping cough in children below two years of age below), among older children in the 3-4-year age range and among children aged 10-16 years of age. Figure 2 clearly shows a decrease at the 5-6-year age range, corresponding to the effect of the 5-year booster vaccine. Furthermore, an increased occurrence is seen among 40-49-year-olds, which is in line with previous years. 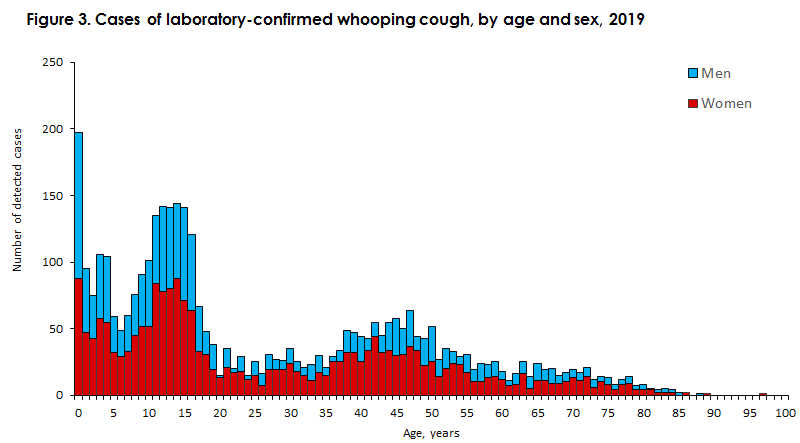 As in previous years, PCR was the most widely used method for detection of whooping cough (88.0%). Serology was used in 12.0% of the detected cases and only a single case was detected by culture (0.03%). The distribution by diagnostic method per age group is shown in Figure 4.

When diagnosing whooping cough, it is important to employ the correct method of analysis depending on the duration of the disease as PCR is only possible in the initial 2-3 weeks of the disease course, and as serology may only be used starting a few weeks after symptom onset. Furthermore, serology should be used for whooping cough diagnostics only in persons aged eight years or older as antibodies from whooping cough vaccinations may interfere with the analysis for a few years after vaccination. A recommendation on choice of diagnostic method is available at the SSI website (In Danish language)

The share of whooping cough cases detected by PCR was higher in 2019 than in the preceding years. This is probably linked to the fact that, during an epidemic, a preponderance of newly affected cases will be diagnosed. 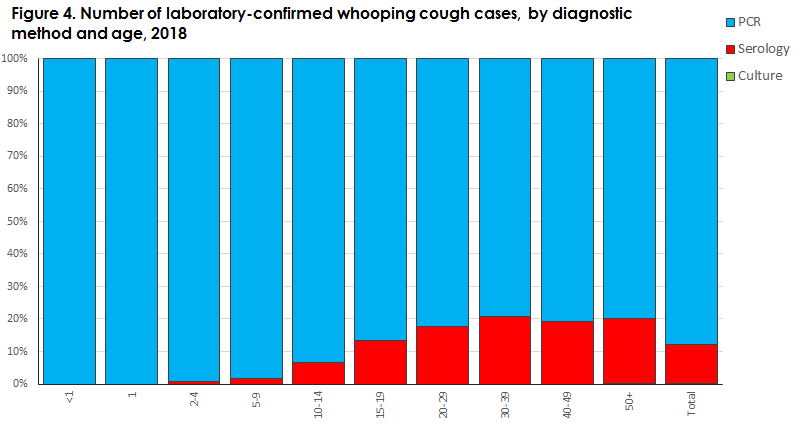 Thanks to the Danish Microbiology Database (MiBa), the number of samples analysed for detection of whooping cough can be monitored. Furthermore, the percentage of detected cases (the positive percentage) is monitored. 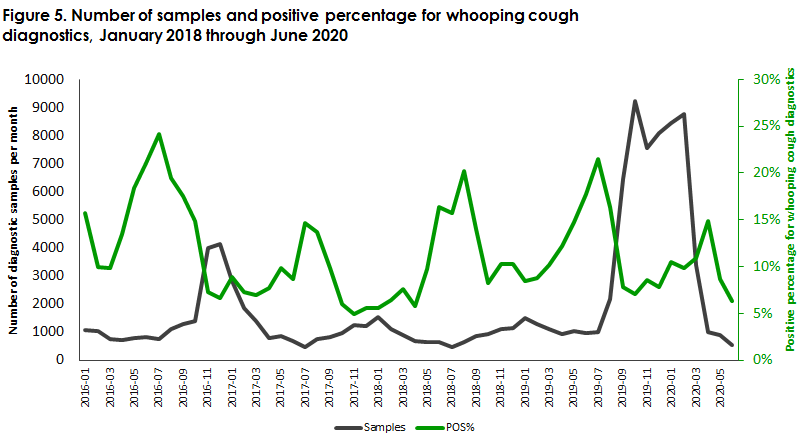 Laboratory-confirmed cases of whooping cough in children below 2 years of age are individually notifiable on Form 1515. A reminder was sent out for 34% of these notifications, as no notification had been received within one month after positive diagnostics.

With respect to the gender distribution of the whooping cough cases, 54% of the cases were recorded among boys (n = 162) and 46% (n = 137) among girls. The differences between the number of laboratory-confirmed (n = 292) and notified cases below 2 years of age are caused by different registration and reporting procedures at year’s end. The age distribution in months for children below the age of two years is presented in Figure 6. The youngest affected person was just eight days old when the positive diagnostic results were known. The notification stated that the mother had been coughing for five weeks, but that no samples had been submitted for whooping cough testing. 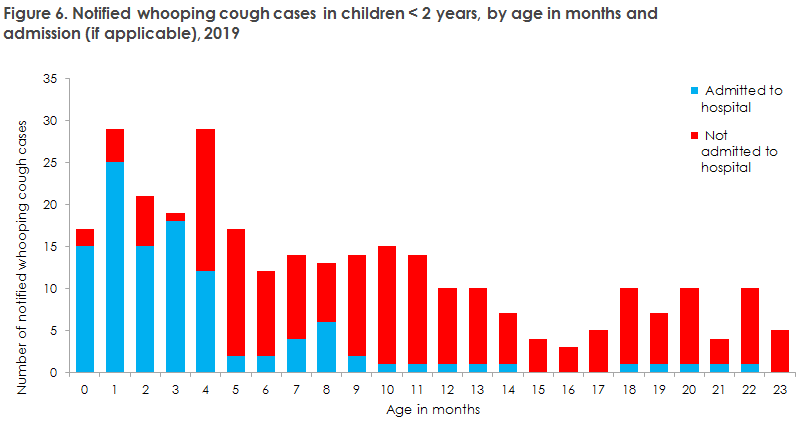 Among the 299 notified children below two years of age, 116 (39%) were unvaccinated, whereas 57 (19%) had received all three whooping cough vaccinations (DiTeKiPol/Hib or Pentavac), see Figure 7. Eight (3%) of the notifications among unvaccinated children stated that the lacking childhood vaccination was due to conscious opt-out.
The share of children below two years of age with whooping cough who have received three primary vaccinations was considerably higher than in the preceding years, when this group typically comprised 10-11% of the whooping cough cases. The reason for the higher share of fully vaccinated children is probably the increased infection pressure and heightened attention to the diagnosis and therefore to sampling. 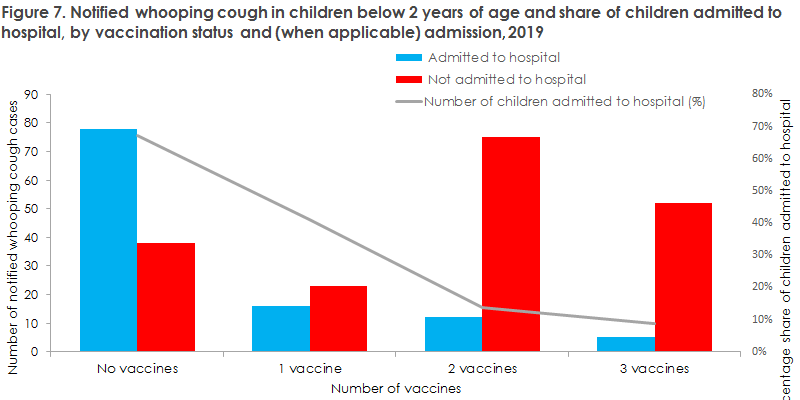 Based on the notifications, no deaths due to whooping cough were recorded in this age group in 2019. Subsequent searches in the CPR register also failed to record any whooping cough-related deaths in the six months after the condition was detected.

Due to the whooping cough epidemic, in the autumn of 2019 the Danish Minister of Health decided to introduce a temporary free offer of vaccination against whooping cough for pregnant women in their 2nd and 3rd trimester. The offer was designed to remain in place until the end of January 2020, but due to the continued high number of cases, the offer was extended to the end of April 2020.

As part of the vaccination package implemented by the Danish government during the corona outbreak, it was decided to extend the offer once more, this time until December 2020. It is currently being assessed if the offer should be made permanent.

From 1 November 2019 to 22 June 2020, a total of 24,279 pregnant women have accepted the offer. The vaccination coverage was particularly high in November 2019 and January 2020, but has since declined to a somewhat lower level, Figure 8.

The number of whooping cough vaccinated pregnant women per month and country area is presented in Figure 9.

At 60,000 annual births, approx. 5,000 will need vaccination every month, provided the coverage is 100%. Based on this number of births, the coverage in the initial six months has been 76%, though it has followed a decreasing trend as the period has passed.

Data on the effect of the vaccination to avoid whooping cough among infants below three months of age will be presented at a later date.