In the past 10-year-period, the TB incidence has generally followed a declining trend, but a relatively larger decrease was seen in 2020 than in the previous years, Figure 1. The decrease observed from 2020 to 2021 follows the trend from previous years. Whether the 2020 decline was affected by COVID-19 lock-downs and/or poorer healthcare access is discussed in Tuberculosis - Report on disease occurrence 2019-20. 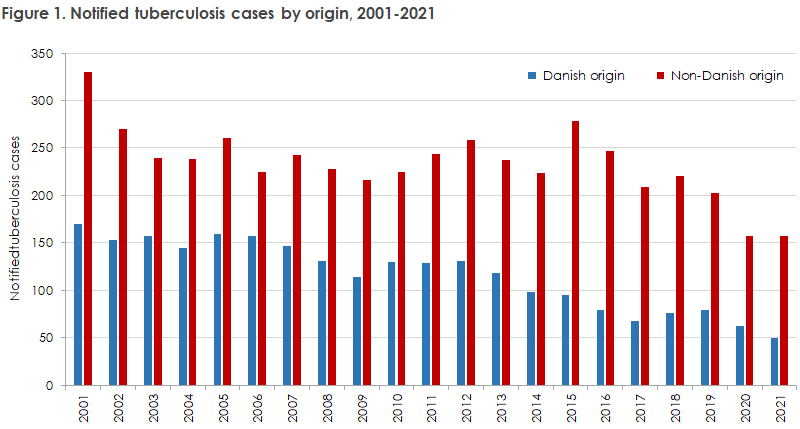 National and regional TB incidence in 2021

The incidence was calculated based on population figures drawn from Statistics Denmark (STD). 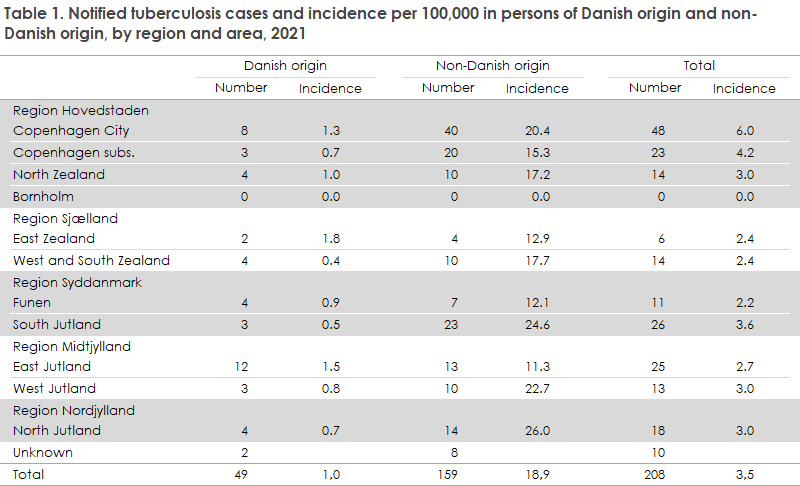 Origin and country of infection

The expression “of non-Danish origin” comprises immigrants and second-generation immigrants. 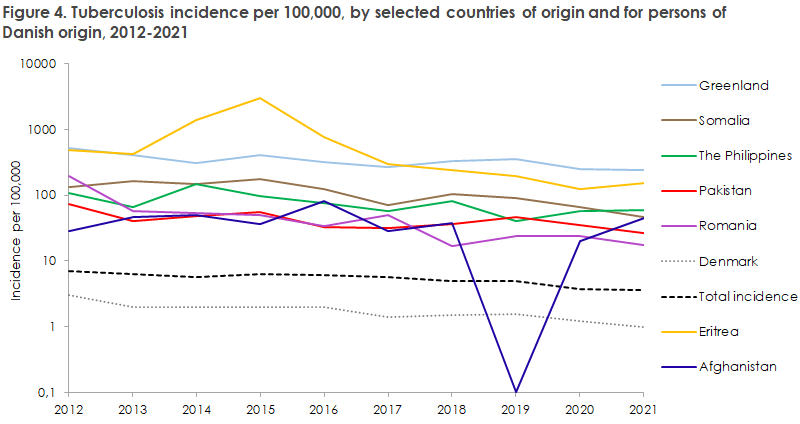 Among those notified with TB in 2021, six persons were HIV positives. In all, among the 208 TB cases notified, 101 persons had tested HIV negative, whereas the HIV status of the remaining 101 persons was not provided on the notifications. For these 101 persons, neither HIV notification to Statens Serum Institut (SSI) nor a HIV test result from the Danish Microbiology Database (MiBa) was available. This indicates that these persons had not undergone HIV testing in connection with their TB diagnostics. However, some test results stored in clinical-biochemical systems may not be accessible from the SSI.

In 2021, a total of seven children below 15 years of age were notified with TB. The majority had presumably become infected in Denmark by a household member or by a close relative. All of these children were of non-Danish origin All children diagnosed with TB in 2021 had pulmonary TB.

In six cases, it was indicated that the person had presumably become infected while working. In 2020, the corresponding figure was three. None of the cases notified in 2021 worked in healthcare.

Compared with 2020, a continued increase was observed in the share of microscopy-positive pulmonary TB cases, i.e. in the share of TB patients with infectious pulmonary TB. The increase is more pronounced among people of Danish origin, where the share has increased from 62% to 69%. It remains unclear exactly what is causing the increase, but active screening activity in the risk environments has generally been reduced during the COVID-19 pandemic. Delayed diagnostics generally leads to more serious disease for the individual TB patient, which is reflected in the high share of microscopy-positive patients.

Among those notified for the first time, isoniazid mono-resistance was detected in nine (6%) patients. In 2021, no cases of multiple resistant (MDR) TB were detected, but one case of extremely resistant (XDR) TB was recorded. As stated above, a marked change is expected in 2022 as a total of 11 MDR TB cases have been recorded to date; see news item in Danish language (11 tilfælde af multiresistent tuberkulose i Danmark i år (ssi.dk) (11 cases of multiple resistant tuberculosis in Denmark this year to date (ssi.dk)). However, four of the 11 cases were detected before the patient arrived to Denmark.

Typing of bacteria from 146 of the 163 (90%) culture-positive patients detected in 2021 shows that a single chain of infection, ”C2/1112-15” (also known as Cluster 2), still dominates, accounting for 20% of all typed cases in Denmark. This indicates that the infection is still actively spreading in Denmark as the chain is typically seen among exposed Danes. A slight decrease was seen in the number of cases compared with 2020, but the share has remained largely stable and remains very high.