Due to the COVID-19 pandemic, the 2019 report on tuberculosis has not previously been published. Thus, the present report covers 2019 and 2020.

The difference in median age is due to the fact that among persons of Danish origin, TB is observed mainly in middle-aged and elderly persons, whereas the condition is seen mainly in young and younger adults of non-Danish origin, Figure 1 and Figure 2. 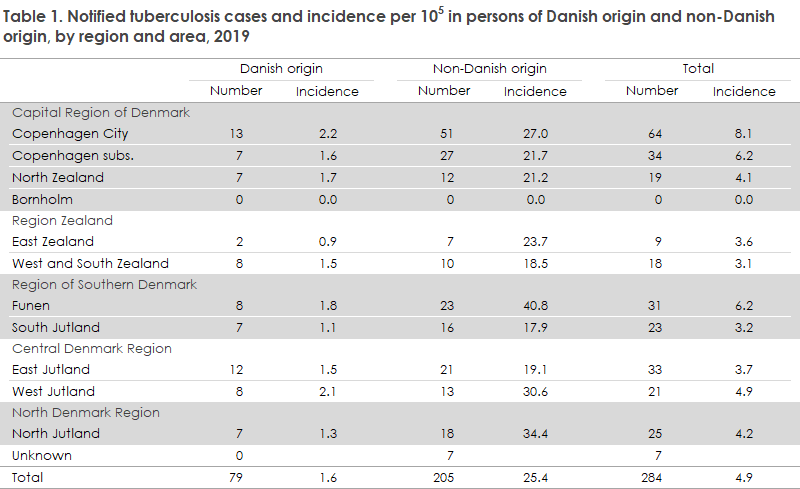 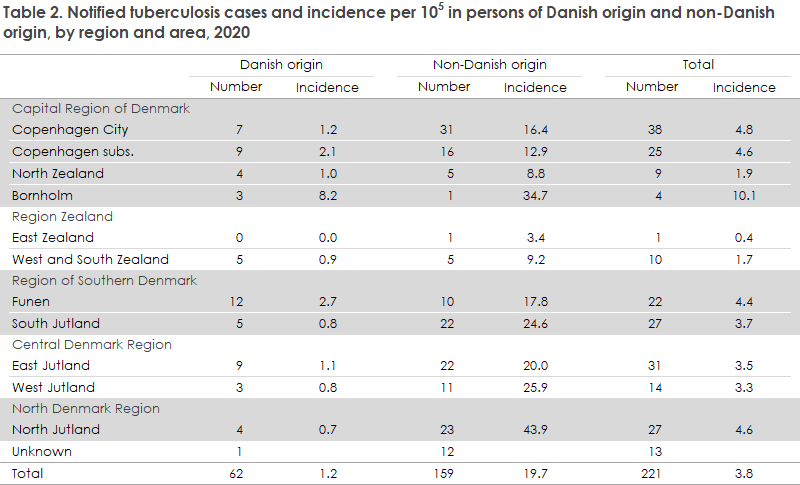 Figure 3 presents the development in TB incidence in persons of Danish origin, by region, in the 2011-2020 period.

Tables 3 and 4 show the distribution by localisation and origin for 2019 and 2020, respectively. 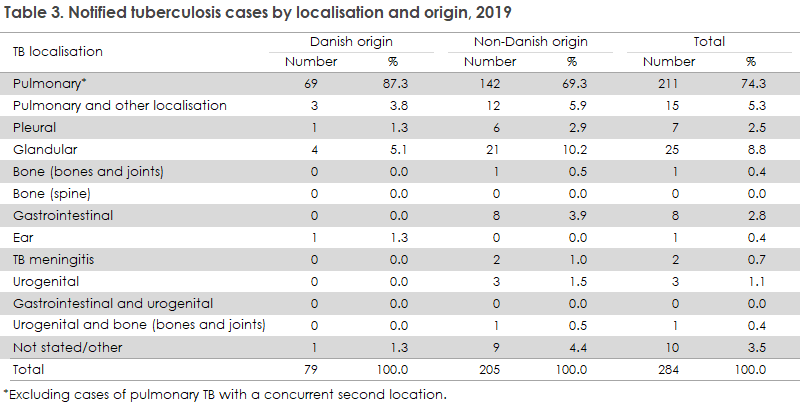 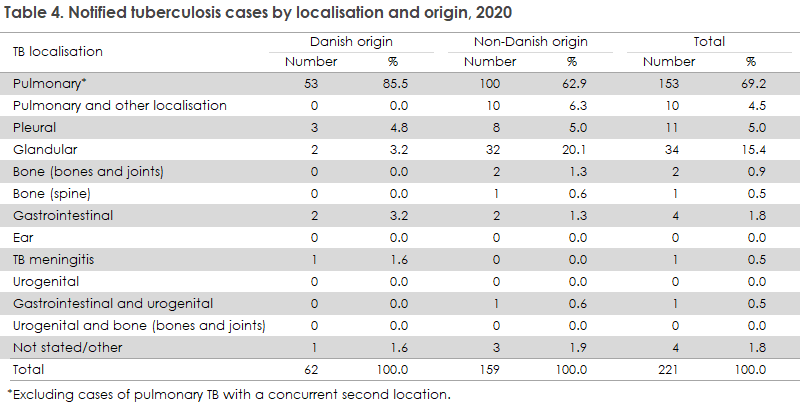 For a total of 99 (20%) patients, 42 Danes (28 in 2019, 14 in 2020) and 57 persons of non-Danish origin (32 in 2019, 25 in 2020), the notification included information about personal risk factors in the form of other chronic conditions, cancer, homelessness, alcoholism or other contact to a risk environment. As previously, it is estimated that risk factors are under-reported in the notifications.

Among the cases notified in 2019 and 2020, information was available about concurrent HIV infection and therefore AIDS for 11 (2.2%) patients; one of Danish origin and the remaining ten of non-Danish origin. In all, among the 505 TB cases notified in 2019 and 2020, 389 patients had tested HIV negative, whereas the HIV status of the remaining 105 patients was not provided on the notifications and therefore remained unknown. The Danish Health Authority (and international organisations including the WHO) still recommends that all TB patients undergo HIV testing, EPI-NEWS 46/09. This is so because TB outbreaks typically start among people who have become infected with tuberculosis when their immune system is weakened, as is the case for AIDS.

In 2019, a total of 58 TB cases were notified among Greenlanders, whereas 2020 recorded 42 TB cases in this group. This corresponds to a 28% decline from 2019 to 2020. However, it should be noted that a slight increase in the number of notified TB cases occurred among Greenlanders from 2018 to 2019, see Figure 3. Greenlanders residing in Denmark remain the largest group of TB cases, stated as number of cases, among persons of non-Danish origin. In 2019 and 2020, the majority of notified cases among persons of Greenlandic origin were notified from the City of Copenhagen (32 cases), followed by South Jutland (18 cases) and North Jutland (17 cases).

In 2019 and 2020, a total of 13 and nine TB cases were notified among persons from Eritrea. Overall, the number of TB cases from Eritrea followed a declining trend from 2015 through 2020, see Figure 4 presenting the TB incidence of selected countries of origin.

Among the cases below five years of age, eight had pulmonary TB and one child had pleural TB. All nine children had probably become infected by a household member or a close family member.

Has COVID-19 had an impact on the number of notified TB cases in 2020?

Globally, a considerable decline has been observed in the number of persons diagnosed with TB and notified in 2020 compared with 2019. Following considerable increases in the 2017-2019 period, an 18% decline was observed between 2019 and 2020, from 7.1 mio. to 5.8 mio. In contrast, the global number of deaths caused by TB increased from 1.2 mio. in 2019 to 1.3 mio. in 2020 due to reduced access to diagnostics and treatment. The global effects of the COVID-19 pandemic on the TB situation are described in the WHO’s annual tuberculosis report, Global Tuberculosis Report 2021.

The marked decline in TB cases globally was reflected in Denmark from 2019 to 2020. In the past ten years, the number of notified TB cases has followed a declining trend, even though minor fluctuations have been observed between years. Whereas the incidence remained at roughly the same level from 2017 to 2019, a more pronounced and marked decline was recorded from 2019 to 2020, see Figure 5. The total reduction in the number of cases was 22.2% (284 in 2019 and 221 in 2020), with no difference between persons of Danish and non-Danish origin, see Table 5. The reduction covered most age groups but was greater for persons of Danish origin aged 35-44 years (53.8%) and was primarily seen among men. For persons of non-Danish origin, the largest reduction was observed in the age group 45-54 years (38.1%), see Table 5.

As was the case globally, it is assessed that the decline in the number of TB cases from 2019 to 2020 was likely due to COVID-19 lock-downs and/or poorer access to healthcare.

In 2019, a total of six TB cases had possible occupational infection stated on the notification.

The notifications of another two cases stated that it remained unknown if occupational transmission had occurred.

In 2020, a total of three TB cases had possible occupational infection stated on the notification.

The notifications of another six cases stated that it remained unknown if occupational transmission had occurred.

When comparing all notified TB cases in 2019 among Danes with the corresponding number for the previous year, 2019 witnessed a decline in the share of microscopy-positive pulmonary TB and thereby a decline from 48% to 42% in the share of infectious pulmonary TB cases. Among immigrants, an increase from 48% to 53% was observed. The decrease among Danes may reflect that TB patients are diagnosed earlier in their disease course, which may be associated with a more active screening effort in the risk groups, particularly in the Copenhagen area.

A comparison of all notified TB cases in 2020 with the corresponding number for 2019 shows that 2020 witnessed an increase in the share of microscopy-positive pulmonary TB and thereby an increase in the share of infectious pulmonary TB. The increase was primarily seen among Danes; from 42% to 62%. A more limited increase was observed among immigrants; from 53% to 54%. In connection with the SARS-CoV-2 and ensuing lock-down of countries, a considerable decline was observed all over Europe in the number of samples submitted for diagnostics. The same applied following the Danish lock-down on 11 March 2020, when a drop was observed in the number of samples submitted to the Department of Tuberculosis and Mycobacteria at the SSI. Simultaneously, TB screening among socially exposed individuals was discontinued in the Copenhagen area, among others. An increasing microscopy-positive percentage may reflect delayed diagnostics because the individual has had to be more self-reliant in terms of seeing a doctor in a situation in which a negative corona test was also required, which may have delayed diagnostics additionally. Thus, it remains unknown if the 22% decline in the number of notifications from 2019 to 2020 (from 284 in 2019 to 221 in 2020) may be explained in full by a real decline, i.e. owed to reduced immigration and a positive effect of restrictions on infection spreading, or if undiagnosed cases are occurring as may be indicated by the high microscopy-positive percentage, maybe in particular among socially exposed persons.

Typing of bacteria from 214 of the 230 (93%) culture-positive patients detected in 2019 shows that a single chain of infection, ”C2/1112-15” (also coined cluster 2), still dominates, accounting for 24% of all typed cases in Denmark, and that it follows an increasing trend compared with 18% in 2018 and 2017. The same applied in 2020 when typing of 155 mycobacteria isolates among a total of 180 (86%) showed that cluster 2 comprised 21% of all typed cases in Denmark. The number of ”C2/1112-15” followed a steadily increasing trend from subtyping of isolates was initiated in 1992 and until 2012, when the curve broke, which may be linked to the previously mentioned screening efforts made in the Copenhagen area. As from 2017, the number has started climbing again. Furthermore, it is clear that the share of patients of non-Danish origin in this chain of infection, which was previously all Danish, continues to rise, reaching 60% in 2019, the same level as in 2018 and an increase in comparison with previous years.

One of the four MDR TB cases in 2019 was a Dane with pulmonary TB who belonged to the same MDR infectious chain observed in 2018 (EPI-NEWS 37/19). The three others were non-Danish cases from Somalia, Vietnam and the Ukraine, respectively. Two of the cases were Beijing strains, a strain associated with several MDR outbreaks globally.

For 2020, drug resistance results were available for 179 of the 180 culture-verified cases. In the final case, an overgrowth of other microorganisms was observed, and therefore antimicrobial susceptibility testing was not possible. A total of 168 of the cases for whom resistance could be determined were notified with TB for the first time, including 43 Danes and 125 immigrants. Among those notified for the first time, isoniazid mono-resistance was detected in nine (5%) patients. No rifampicin mono-resistance was detected.

In 2020, two cases of multiple resistance (MDR), corresponding to 1% of the culture-verified cases, were observed. One of these cases was a patient with a previous TB diagnosis from 2018 who was comprised by the first MDR-TB outbreak in Denmark, described in EPI-NEWS 37/19. No cases of extreme drug resistance (XDR) were detected in 2020.