The difference in median age is due to the fact that among persons of Danish origin, TB is observed mainly in middle-aged and elderly persons, whereas the condition is seen mainly in adolescents and younger adults of non-Danish origin, Figure 1. 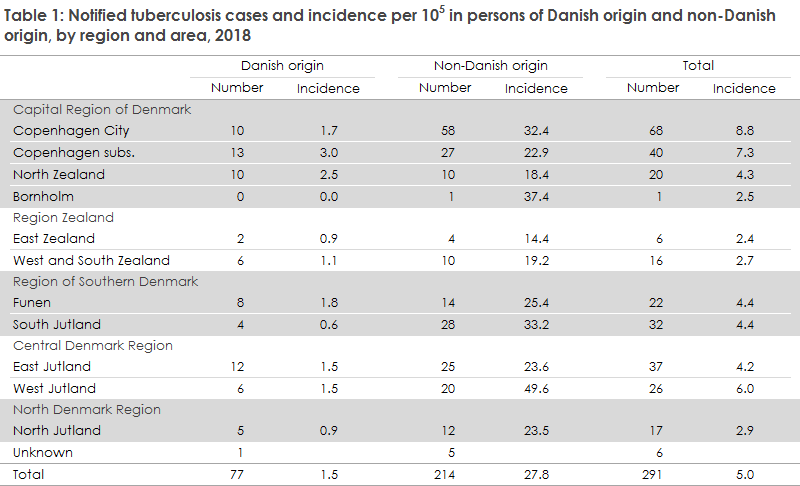 Figure 2 presents the development in TB incidence in persons of Danish origin, by region, in the 2011-2018 period.

In all five regions, the incidence followed a decreasing trend in the 2011-2017 period; nevertheless, a slight increase was seen in the Capital Region of Denmark in 2015-2017. The increase may be due to local initiatives in the form of active contact tracing in risk environments and therefore an increased number cases recorded. From 2017 to 2018, a substantial increase was seen in the Central Denmark Region. The increase was mainly caused by an rise in the TB incidence in West Jutland from 13 to 26 cases. The increase includes persons of non-Danish origin (five cases from Greenland and four from the Philippines) and of Danish origin (eight cases), including an outbreak counting four cases of MDR-TB, see the section “Microbiological trends”. Furthermore, a slight increase was observed in the regions of Zealand and North Denmark from 2017 to 2018. 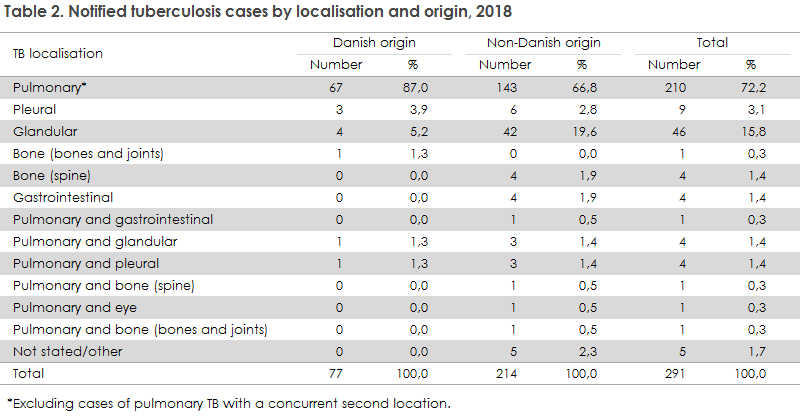 A total of 21 (7%) patients were notified with TB relapse, including eight Greenlanders, four Danes, three Somalis, and one person from Bangladesh, India, Iraq, Syria, Uganda and Vietnam, respectively. For seven of the 21 patients, the previous TB episode had occurred within the past 5 years. For five of the 21 persons, the notification stated previous TB without specifying the year.

For a total of 61 (21%) patients, 24 Danes and 37 of non-Danish origin, the notification included information about personal risk factors in the form of other chronic conditions, cancer, homelessness, alcoholism or other contact to a risk environment. For a single patient, it was stated that the patient was immunosuppressed iatrogenically due to treatment with TNF-alpha inhibitor due to arthritis. As previously, it is estimated that risk factors are under-reported in the notifications.

Information about concurrent HIV infection and therefore AIDS was provided in five (1.7%) cases, all of non-Danish origin. In all, 239 of 291 patients had tested HIV negative, whereas the HIV status of the remaining 47 patients was not provided on the notifications and therefore remained unknown. The Danish Health Authority (and international organisations including the WHO) still recommends that all TB patients undergo HIV testing, EPI-NEWS 46/09.

2018 saw a total of 54 notified cases of TB in Greenlanders. This was an increase from the 44 cases observed in 2017. Greenlanders in Denmark remain the largest group of TB cases, stated as number of cases, among persons of non-Danish origin. The majority of cases were notified from the City of Copenhagen (19), South Jutland (16) and East Jutland (7).

A total of 14 TB cases were notified among persons from Eritrea. This was the same number as observed in 2017 and half the number seen in 2016 (28 cases). Figure 3 shows the TB incidence for selected countries of origin.

Seven of the nine children who had been born in Denmark had presumably also become infected in Denmark. One child was of Danish origin, while the others were from Somalia, Afghanistan, Iraq, Vietnam and Greenland.

The remaining two children had become infected by family members. The country of origin of both of these children was Somalia.

A total of 10 children had pulmonary TB and one child had glandular TB.

Eight of the children (73%) had probably become infected by a member of their household or a close relative. A single child had tuberculosis relapse following treatment in 2016. For the remaining two, there was no information about the source of the infection.

In six cases, infection had possibly occurred in relation to occupational activity.

One of the affected persons worked as a lorry driver across the whole of Europe. Furthermore, the person lived very closely with other nationalities and was from Asia. Genotyping demonstrated a unique type, why infection in Denmark was not probable, whereas occupational infection abroad could not be further clarified.

One person was believed to have become infected in connection with work in a bar. Even so, the person had previously had other TB risk factors. Genotyping revealed a unique type, why occupational infection in Denmark was not likely.

One person was believed to have become infected while working as a doctor in Indonesia. Genotyping revealed a type not previously seen in Denmark. Furthermore, the person was of non-Danish origin and from a country that has a high TB incidence. Occupational infection was therefore possible, but this could not be substantiated further.

In four cases, it was stated that it remained undetermined if the case was one of occupational infection. Two of these persons worked at a hospital, but it was not possible to determine if infection had occurred at the hospital. Even so, detection of a unique genotype in one of the cases may indicate that infection had occurred abroad. In the two remaining cases, educational institutions were stated as place of infection, but both also had connection to either South America or Asia. One of the two cases had a unique genotype, why infection in Denmark was not likely. The other formed part of a cluster counting a total of six patients. Two had glandular TB and three pulmonary TB, but with negative microscopy. It was therefore not likely that infection had occurred from any of these cases, and it was deemed unlikely that infection was occupational.

2018 saw two outbreaks with extensive contact tracing in which infection had occurred at a hospital and a school, respectively, and where the share of latently infected contacts and the number of contacts who had active TB detected varied considerably.

Following initial testing of the immunosuppressed patients associated with the patient’s place of work, the contact tracing study was expanded as no direct contact had occurred between the index person and a share of the infected people who had stayed at the hospital where the index patient served. The remaining patients who had been associated with the day hospital department within the period when they could potentially have become infected were therefore also offered testing.

Among a total of 827 tested persons, 34 were diagnosed with latent TB by the IGRA test (Quantiferon). None of the affected patients had active TB. A total of 28 of the patients were receiving immunosuppressant therapy, and 24 of these patients had a negative IGRA test within the 3-year period leading up to the contact tracing activity. For the remaining patients, their previous negative IGRA tests were 3-8 years old.

All patients were offered treatment for latent TB.

Furthermore, latent TB was detected in seven of 44 staff members. It was established that four of these staff members had become infected within 2 years before their test, either because they had a negative IGRA test or because they did not convert until their second test.

In the spring of 2019, a 17-year-old pupil at Haslev School from an Afghani family was diagnosed with infectious pulmonary TB. In the four months leading up to her diagnosis, she had suffered from extensive coughing, increasing weight-loss, loss of appetite and night sweats. Through her GP, whom she had seen repeatedly, she had been treated for pneumonia twice without effect. After 3.5 months, x-rays of her thorax showed a large infiltration in the upper lobe of her right lung. The infiltration remained unchanged at a second control 2 weeks later, and she was referred for TB work-up.

As part of the contact tracing performed, her family along with pupils and teachers from her class, parallel class track and specialisation classes were tested. The patient’s 1-year-old sibling, who had presented with intermittent fever for 2-3 months, was diagnosed with active TB.

Among a total of 125 persons tested in the context of the school, four pupils and one teacher showed signs of active TB, and therefore received anti-tuberculosis treatment. Both parents, the patient’s four other siblings, 20 pupils and a teacher had a positive IGRA test (Quantiferon) with no radiological, previous or current clinical signs of active TB, and they were therefore offered treatment for latent TB.

The finding of a surprisingly high number of cases with latent (17%) as well as active TB (4%) in the school environment reflect the “diagnostic delay” (from the symptoms present to the patient is diagnosed) and a massive and intense exposure (high bacterial load + frequent coughing + extensive exposure time).

In 2018, the TB diagnosis was confirmed by culture and subsequent determination of species in 219 of 291 cases (75%). Hereof, 58 of 75 (77%) were confirmed among Danes and 161 of 206 (78%) among immigrants. In two, the disease was caused by Mycobacterium africanum, the rest had classic Mycobacterium tuberculosis.

Among the 72 cases that were not confirmed by culture, ten (14%) cases had a positive PCR performed at Statens Serum Institut (SSI). Two of the ten PCR-positive cases were also positive upon microscopy. Negative culture despite positive PCR and/or microscopy may be due to patients having been started on anti-tuberculosis treatment before the culture samples were taken. According to the ECDC (The European Centre for Disease Prevention and Control), 221 (76%) were confirmed cases, nine (3%) were probable cases and 61 (21%) were possible cases.

Compared with 2017, 2018 witnessed a decline in the share of microscopy-positive pulmonary TB and thereby a decline in the share of infectious pulmonary TB cases. The greatest decline was seen among Danes, 54% to 48%, whereas the share among immigrants remained unchanged at 48%. The decrease may reflect that TB patients are diagnosed earlier in their disease course, which may be associated with a more active screening effort in the risk groups, particularly in the Copenhagen area.

Typing of bacteria from 216 of the 219 (99%) culture-positive patients detected in 2018 shows that a single chain of infection, ”C2/1112-15”, still dominates, accounting for 18% of all typed cases in Denmark compared with 18% in 2017 and 16% in 2016. Furthermore, it is clear that the share of patients of non-Danish origin in this chain of infection, which was previously all Danish, continues to rise and is approaching 60%. This chain of infection therefore still demands considerable attention as it is the largest recorded in Scandinavia to date.

The four MDR-TB were Danes with pulmonary TB in whom in addition to MDR, the isolate was resistant to ethionamid. The four cases formed part of the same chain of infection, both with respect to genotype and epidemiologically, and were also identical to a strain isolated in 2010 that had not previously been detected in Denmark. The Danish index patient had a strain with a genotype that occurs frequently in Asia and had probably become infected during an extensive stay in India.

This report is also described in EPI-NEWS 37/19.