The difference in median age reflects the fact that among persons of Danish origin, TB is observed mainly in middle-aged and elderly persons, whereas the condition is seen mainly in young and younger adults of non-Danish origin, Figure 1.

Furthermore, suburban Copenhagen recorded an incidence above the national mean (5.3 per 100,000), whereas the lowest incidence remained East Zealand (0.4 per 100,000, one case).

Figure 2 presents the development in TB incidence in persons of Danish origin, by region, in the 2011-2017 period. 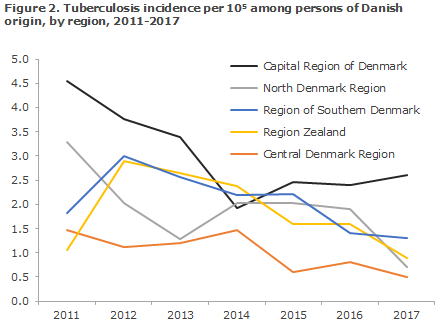 In all five regions, the incidence followed a decreasing trend in the 2011-2017 period; nevertheless, a slight increase was seen in the Capital Region of Denmark in 2015-2017. This may be due to local initiatives in the form of active infection tracing in risk environments and therefore an increased number cases recorded, EPI-NEWS 12/13.

TB among men of Danish origin

2017 recorded three times as many TB cases among men as among women of Danish origin, and middle-aged Danish men have been over-represented among TB cases for many years. Nevertheless, a decrease in the number of cases was recorded among Danish men aged 25 years or above in the 1995-2017 period, Figure 3.

The development in the number of cases in this risk group has been more favourable in the capital Region of Denmark, where screening in risk group environments has been performed systematically since 2012 (even so, the Capital Region still records the highest number of cases), Figure 4. The five-year periods 1995-1999 and 2000-2004 saw a rather high number of cases for which information about region of residence was lacking. 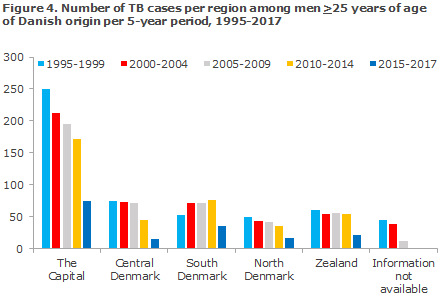 As the regions were not established until 2007, incidences per region cannot be calculated for the entire period.

Furthermore, there are signs of a certain cohort effect where the age group with the highest incidence has increased over time, Figure 6. 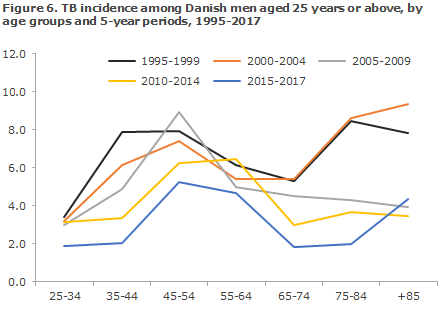 Apart from the 2005-2009 period, the group of 45-54-year-olds has recorded a constantly decreasing TB occurrence over time; and for the 2010-2017 period, the 55-64 year age group had an age-specific incidence that was on a par with that recorded for the 45-54-year-olds in the same period. This suggests that, to a certain degree, the same group of risk persons has had TB detected in the course of the period, possibly including relapse of previous TB.

Finally, the occurrence of TB among elderly aged 75 years or more was clearly lower in the 2005-2017 period than in the 1995-2004 period. This probably reflects the gradual disappearance of the group of elderly people who became infected as children and adolescents in the 1910-1940 period, when TB was a frequently occurring infection, and who had active TB (or relapse) late in life.

A single case of TB meningitis (and pulmonary TB) was seen in a Danish man in his fifties with several TB risk factors.

In total, 19 (7%) patients were notified with TB relapse, including 7 Greenlanders, 5 Danes, 3 Romanians, 2 Pakistanis and 1 patient from China and Vietnam, respectively. For 7 of the 19 patients, the previous TB episode had occurred within the past 5 years.

For a total of 43 (15.6%) patients, 16 Danes and 27 of non-Danish origin, the notification included information about personal risk factors in the form of other chronic conditions, cancer, homelessness, alcoholism or other contact to a risk environment. For a single patient, it was stated that the patient was immunosuppressed iatrogenically due to treatment with TNF-alpha inhibitor due to juvenile arthritis. As previously, it is estimated that risk factors are under-reported in the notifications. Patients who will be treated with biologics should always be screened for latent/active TB before treatment is initiated.

Information about concurrent HIV infection and therefore AIDS was provided in 3 (1.1%) cases, all of non-Danish origin. In all, 208 of 275 patients had tested HIV negative, whereas the HIV status of the remaining 64 patients was not provided on the notifications and therefore remained unknown. Compared with the previous year, markedly more people were HIV tested (77% in 2017, compared with 45% in 2016). This may be owed to an increased attention to testing and to the introduction of a new notification form in the course of 2017, which enquires specifically about the patient’s HIV status. The Danish Health Authority (and international organisations including the WHO) still recommends that all TB patients undergo HIV testing, EPI-NEWS 46/09.

2017 saw a total of 44 notified cases of TB in Greenlanders. This was a decline from 52 cases in 2016, but Greenlanders in Denmark remain the largest group of TB cases, stated as number of cases, among persons of non-Danish origin. The majority of cases were notified from the City of Copenhagen (14), South Jutland (11) and East Jutland (6).

A total of 14 TB cases were notified among persons from Eritrea. This was a 50% reduction compared with 2016 (28 cases). Figure 7 shows the TB incidence for selected countries of origin.

Furthermore, 6 of the 7 children who had been born in Denmark had presumably become infected in Denmark. One child was of Danish origin, while the other children were from Somalia, Romania, Djibouti, Indonesia, Bosnia and Greenland, respectively.

The remaining 7 children were born abroad and 2 had probably become infected before their arrival to Denmark. Their country of origin was Ethiopia and Somalia. The final 5 children who had been born abroad were presumably infected in Denmark, all as part of outbreaks in families. The country of origin of these children was Greenland, Somalia and Syria. Overall, 11 of 14 children had thus presumably become infected in Denmark.

A total of 12 children had pulmonary TB and one child had glandular TB. One child was diagnosed with tuberculosis in an abscess in the oral mucosa.

In October 2017, The Danish Paediatric Society published Guideline on Diagnostics and Treatment of Tuberculosis in Children and Adolescents.

In three cases, infection had possibly occurred in relation to occupational activity.

One had previously worked in the health sector, cleaning at a tuberculosis hospital in the 1980s. This workplace was stated as the place of infection. The diagnosis was verified by culture and PCR, but the genotype had not been seen in Denmark since 1992 when systematic genotyping of all TB isolates was introduced. Therefore, potential occupational infection could not be substantiated any further.

One person was believed to have become infected in connection with work in a bar. Genotyping revealed a type that circulates in risk environments in Denmark, why occupational infection was possible, but this could not be further substantiated.

One person was believed to have become infected while working in a refugee camp in Pakistan. The genotype showed a type not previously seen in Denmark. Furthermore, the person is of non-Danish origin and from a country that has a high TB incidence. Occupational infection is therefore possible, but this could not be substantiated further.

In 2017, the TB diagnosis was confirmed by culture with subsequent species determination in 217 of the 275 (79%) notified cases, including 56 of 69 (81%) cases in Danes and 161 of 206 (78%) cases in immigrants. In one case, the disease was caused by Mycobacterium bovis; the rest had classic Mycobacterium tuberculosis.

Among the 58 cases that were not confirmed by culture, four (7%) cases had a positive PCR performed at Statens Serum Institut (SSI). One of the four PCR positive cases was also microscopy-positive. Negative culture despite positive PCR and/or microscopy may be due to patients having been started on anti-tuberculosis treatment before the culture samples were taken. The final PCR-positive case could not undergo final species determination due to overgrowth by other microorganisms. According to the EU disease definition, EPI-NEWS 51/09, a total of 218 (79%) were confirmed cases, 2 (0.7%) probable cases and 55 (20%) were possible cases.

Drug resistance results were available for 215 of 216 (>99 %) culture-verified cases. Mycobacteria from one case grew so poorly that resistance could not be determined.

Two cases of multi-resistance (MDR) were detected, corresponding to 1% of the culture-verified cases. No cases of extreme drug resistance (XDR) were detected in 2017. MDR is resistant to the two primary antibiotics; isoniazid and rifampicin and any other antibiotics. The term XDR resistance designates MDR resistance and additional resistance to a minimum of one of the important second-line drugs belonging to the group of fluoroquinolones and a minimum of one of the three injectable drugs amikacin, capreomycin or kanamycin.

One of the two MDR-TB cases was a 35-year-old Danish man with pulmonary TB in whom the isolate, in addition to MDR, was resistant to streptomycin. The second MDR-TB-case was a 13-year-old girl with glandular TB born in Somalia. Beyond MDR, the isolate was not resistant to any of the antibiotics tested for.