The influenza season - report on disease occurrence in 2019/2020

The influenza season - report on disease occurrence in 2019/2020

The 2019/2020 influenza season was the mildest season in several years. The spreading of novel coronavirus disease (COVID-19) to Denmark at the end of February 2020 triggered the implementation of comprehensive measures to limit transmission in weeks 11 and 12, after which the occurrence of circulating influenza virus disappeared almost completely.

The season was mostly dominated by influenza A. The subtypes (H1N1)pdm09 and (H3N2) were seen with almost the same frequency in the beginning of the season, but towards the end of the season, influenza A (H3N2) comprised the majority of the detected cases. Only very few cases were recorded of influenza B, mainly of the Victoria subtype.

A total of 888,507 influenza vaccines were registered as having been administered in 2019/20. Hereof, 600,600 vaccines were given to elderly people aged 65 years or older, corresponding to a 52% vaccination coverage in this group. This is in line with the level recorded in 2018/19. The season’s influenza vaccines provided a relatively high protection as the overall vaccine effectiveness against influenza was 56% among patients contacting their GP and 40% among patients admitted to hospital.

From week 40 in 2019 to week 20 in 2020, the occurrence of influenza-like illness (ILI) was reported to the sentinel surveillance scheme by approx. 120-130 GPs weekly, which is in line with the previous season. The ILI occurrence was also followed daily via the nationwide surveillance performed by emergency call service physicians and also via the 1813 Helpline in the Capital Region of Denmark.

ILI in the population was monitored through Influmeter; a web-based monitoring system in which anyone residing in Denmark can report influenza-like symptoms independently of any healthcare contact. In connection with the COVID-19 pandemic, the number of participants increased considerably, and from a brief and substantial mid-season increase in ILI in the population, the share dropped dramatically in connection with the first measures introduced and the lockdown of Denmark from week 11/12 and onwards.

Influenza-related admissions were monitored through weekly data capture from existing registers. Patients who had influenza detected were identified in MiBa; information about hospital admissions, intensive therapy and underlying diseases was retrieved from the national Patient Registry, and information about deaths among admitted patients was retrieved from the Danish Civil Registration Register (the CPR Register). Due to changes made to the data structure in the National Patient Registry in 2019, the report for 2019/2020 is not completely comparable to those of previous years.

The share of patients who contacted their GP with ILI remained at a very low level for most of the season, until approx. week 11-12, when a substantial shift was seen to a very high level, Figure 1. The strong increase was most likely due to COVID-19 rather than to influenza infection. In the following weeks, the sentinel surveillance scheme was adjusted and extended to comprise COVID-19 symptoms, which are generally broader than influenza symptoms and do not present acutely as with influenza symptoms. Concurrently, phone consultations were introduced, and patients were tested in the laboratory by swabs from the nasal cavity performed in the patient’s home, by the patients themselves. Therefore, the ILI-curves from week 12 onwards do not represent patients with influenza exclusively, but include a broader group, such as COVID-19 patients.

At the end of the influenza season in week 20, an intermediate level of ILI was observed. The ILI sentinel surveillance scheme has continued to operate as a COVID-19 surveillance scheme to supplement the assessment of the degree of community transmission. 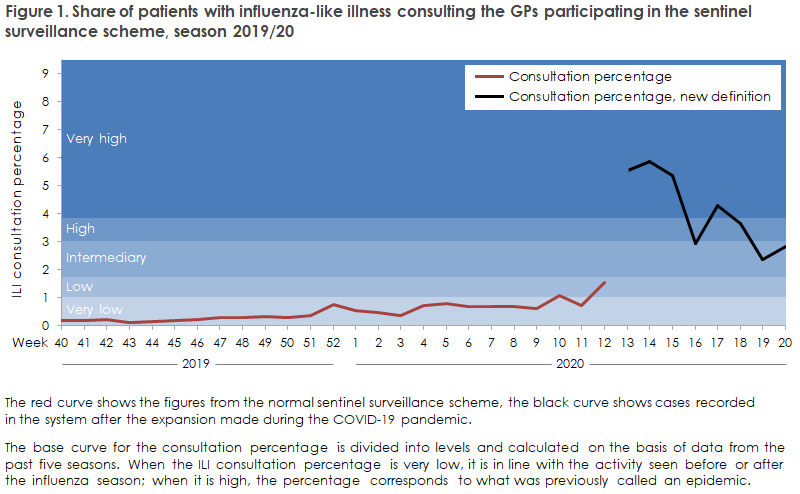 Until week 12, the influenza activity in the sentinel surveillance scheme was lower than in the previous five influenza seasons, Figure 2. After week 12, the strong increase mentioned above in the ILI consultation percentage was seen due to COVID-19 rather than influenza. 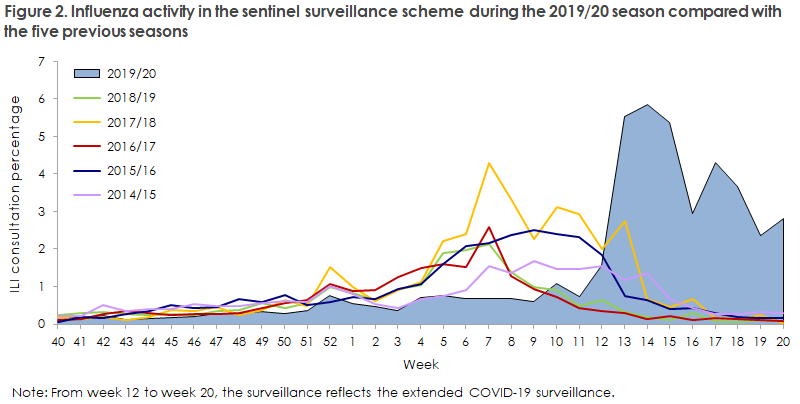 In the surveillance of the emergency call service physicians, the consultation percentage recorded in the 2019/20 season until week 12 was also low compared with previous seasons, Figure 3. In the following weeks, an increase was observed in the number of contacts, probably due to COVID-19. 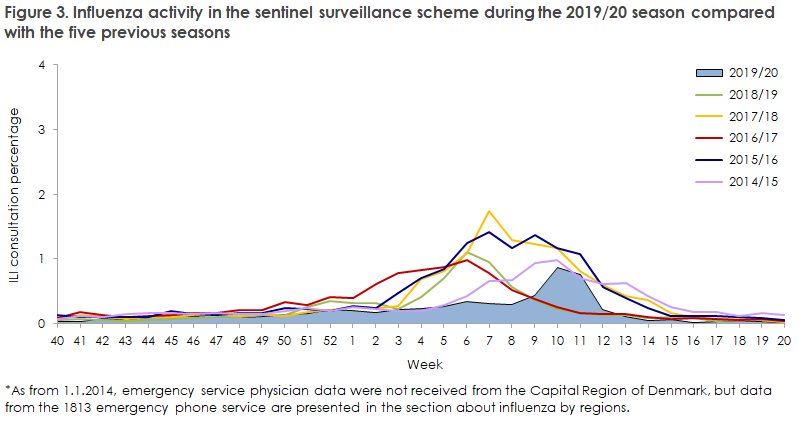 Among Influmeter participants, approx. 900 persons reported their symptoms weekly from October 2019 to March 2020. In the following months, Influmeter was also used for volunteer COVID-19 symptom reporting, and the number of participants rose to approx. 35,000.

In all, 5,300 cases of ILI were recorded among the season’s 35,000 participants. The seasonal variation in ILI seen was the same as the preceding years. The highest number of cases was recorded in week 52, when approx. 4% reported ILI-like symptoms, Figure 4, and the season concluded recording the lowest share of participants with ILI in the past six years. The considerable decrease after week 12 is likely associated with the introduction of restrictions and measures to curb COVID-19 that were initiated in week 11 causing a drastic decrease in influenza and other airway infections in the subsequent weeks.

Similarly, the share of participants who themselves believed that they had COVID-19 symptoms decreased from 11% to 3%, Figure 5. The most frequently reported symptoms among persons reporting COVID-19 were cough, headache and muscle and joint pain, and only 1/4 of these people contacted the healthcare system, Table 1.

Laboratory diagnostics based on the MiBa

MiBa data extraction showed that a total of 68,530 patients were tested for influenza from week 40 in 2019 to week 20 in 2020. Hereof, 7,575 tested positive for influenza (11% of those tested); 6,775 for influenza A (10%) and 800 for influenza B (1%), Figure 6. The share of positive samples was lower than in recent seasons, as the total share of positives was 29% in 2017/18 and 20% in 2018/19. Detection of laboratory-confirmed influenza in the 2019/20 season dropped suddenly from 20% influenza-positive persons in week 11 to <1% in week 14, 2020. The dramatic decrease in the number of influenza-positive tests was observed in the days after Denmark intensified restrictions and introduced a nationwide lockdown to stop the COVID-19 pandemic, Figure 7. A decrease in the influenza percentage of this size, in only a few weeks has not previously been observed, Figure 8. 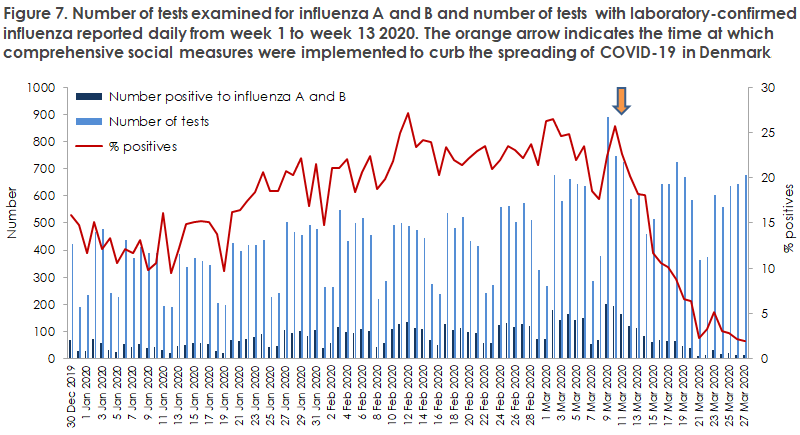 In the course of the season, the National Danish WHO Influenza Centre at the SSI received a total of 4,015 influenza samples for testing and characterisation of influenza virus, including 505 samples (only including week 40 2019 - 12 2020) submitted by the sentinel physicians, 171 diagnostic samples submitted by GPs and other laboratories, and 3,310 surveillance samples diagnosed and submitted by the departments of clinical microbiology. The distribution of patients by identified virus strains is presented in Table 2. A total of 67% of the submitted samples were sub-typed in the course of the season (sub-typing was performed for all submitted sentinel and diagnostic samples; however, surveillance samples were only spot checked). Among the typed samples, 94% were influenza A virus and 6% were influenza B virus. In the influenza A virus group, the (H3N2) subtype comprised 63% and (H1N1)pdm09 37%. Both subtypes co-circulated during the season, but (H3N2) was particularly dominant in the final half of the season, Figure 9. Among influenza B virus, the B Victoria line comprised 98.8% and B-Yamagata 1.2%. 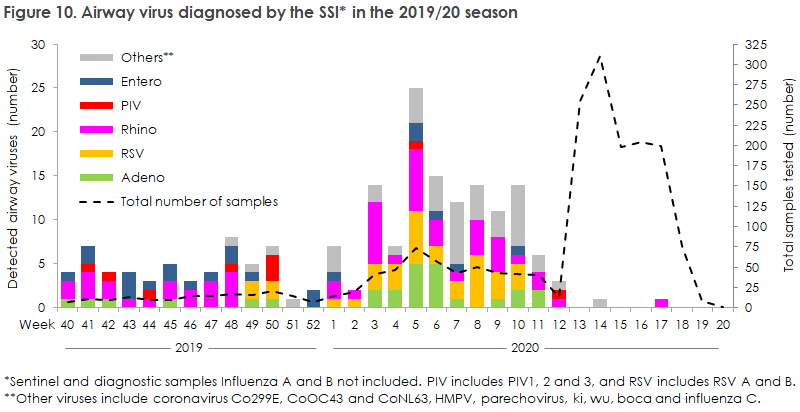 The National Influenza Centre for the WHO at the SSI carries the national responsibility for testing influenza samples from patients who initiate antiviral treatment for antiviral resistance. In total, 16 samples were received from four patients who had received antiviral treatment in the 2019/20 season. Antiviral resistance to the neuraminidase inhibitor oseltamivir (Tamiflu®) had developed in two of the four patients. Additionally, a total of 397 randomly selected surveillance samples were tested for resistance to the neuroaminidase inhibitors oseltamivir (Tamiflu®) and zanamivir (Relenza®).

Mutations that produce resistance to oseltamivir were found in a sample from one patient. It was established that the patient had received Tamiflu treatment. As all findings of antiviral resistance were treatment related, we have no evidence to indicate circulation of antivirally resistant influenza virus in Denmark. The presently circulating influenza viruses are all naturally resistant to the ion channel inhibitors amantadine and rimantadine. 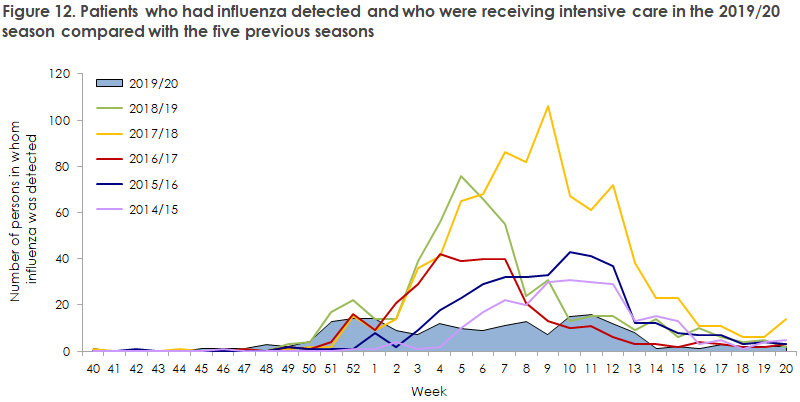 In line with the few influenza-related hospital admissions, the number of influenza-related deaths was low in the 2019/20 season. Among the patients who were admitted to hospital, 97 died within 30 days of having influenza detected, Table 3. Based on analyses of the overall excess mortality in the population, it is estimated that 119 (between 41 and 196) persons died in relation to influenza, most of whom were aged 65 years or more. This is considerably fewer than were seen in the previous three influenza seasons, which were all serious, not just in Denmark but in Europe in general.

In the period from 1 November 2019 through 15 January 2020, seasonal influenza vaccination was offered free of charge to persons with an increased risk of serious influenza, to pregnant women in their second and third trimesters and persons with immune deficiency and their contacts until 1 March 2020, EPI-NEWS 41/19. In the 2019/20 season and for first time ever, 4-valent inactivated influenza vaccines that protect against two types of influenza A and two types of influenza B were used in all risk groups.

A total of 888,507 were registered as having been administered in 2019/20. Hereof, 600,600 vaccines were given to elderly people aged 65 years or more, corresponding to a 52% vaccination coverage in this group. This is in line with the level recorded in 2018/19. It should be mentioned that administrative changes have been introduced in the service codes used for risk groups in the 2019/20 season, and therefore it is difficult to compare the vaccination coverage directly with previous seasons.

By linking information about samples tested for influenza from MiBa to vaccination data from DVR and data on influenza type from the National Influenza Centre, SSI calculated the influenza vaccine effectiveness (VE) in a test-negative case-control design earlier in the season. VE to influenza was calculated mid-season and was 56% (95% confidence interval: 46-65%) among patients contacting their GP, and 40% (95% confidence interval: 27-51%) among patients admitted to hospital, but varied by type of influenza and between age groups. The estimates were adjusted for age, gender, underlying disease and calendar month (Interim 2019/20 Influenza Vaccine Effectiveness: Six European Studies, September 2019 to January 2020, Euro Surveillance, 2020 Mar;25(10):2000153. doi: 10.2807/1560-7917.ES.2020.25.10.2000153).

The WHO recommends that 4-valent influenza vaccines for the next influenza season in 2020/21 comprise the following virus components:

When using 3-valent vaccines, the recommendation is to use B/Washington/02/2019 (B/Victoria line)-like virus for the influenza B virus part.

This report is also described in EPI-NEWS 26/20.