As in previous years, the majority of the patients resided in the Copenhagen area, Table 2. 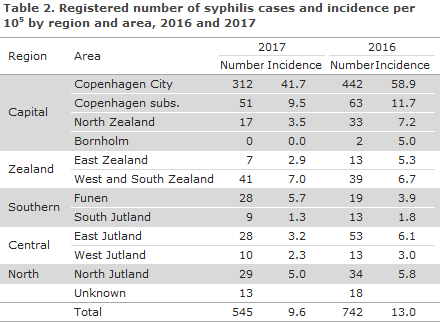 The total number of cases registered in 2017 was somewhat lower than the preceding year (742), Table 2. However, the number of notified cases was in line with the previous year (317). Thus, the increase observed for a number of years has halted, Figure 1.

Among the 58 syphilis cases that were detected in women, 10 were found owing to the pregnancy screening. In one of these cases, no notification had been made to the NSID. Eight of the pregnant women were of Danish origin, one was from Romania and one from the Ivory Coast.

One of the notified pregnant women was a known IV drug user. Among the 326 cases in which origin was stated, 245 (75%) were of Danish origin, 72 (22%) were immigrants, seven were second-generation immigrants and two were tourists. The number of persons who had not been born in Denmark totaled 74 from 38 different countries around the globe.