Salmonella infections are primarily characterised by their serotype. The majority of the serotypes are zoonotic and transmitted via foods. The zoonotic Salmonella types are monitored via the laboratory notification system. The human types, S. Typhi and S. Paratyphi, are also clinically notifiable on Form 1515. These types are described in an annual report issued at a later time. 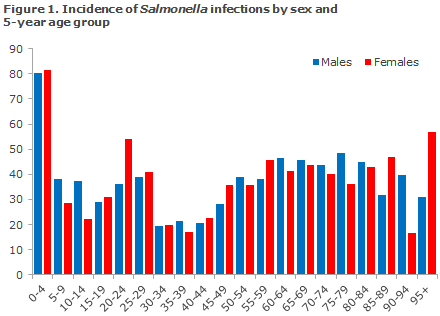 The incidence per residential municipality ranged from 0 (Samsø) to 38 (Hørsholm) per 100,000 inhabitants per year, Figure 2. The number of infections by municipality for each of the two years may be found here. 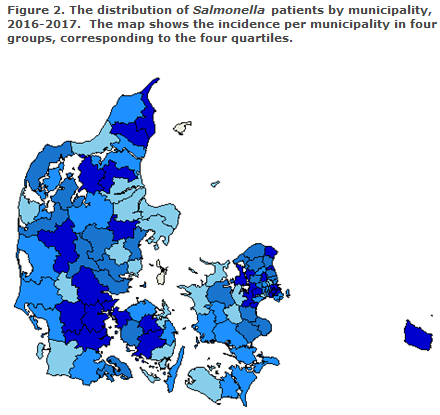 The ten most frequent serotypes for 2016 and 2017 are presented in Table 1. S. Enteritidis was the most frequent serotype in both years. As was also the case in previous years, the monophasic variant of S. Typhimurium, including isolates with the antigen formula ”1,4,[5],12:i:-” was seen more frequently than S. Typhimurium itself in 2016 and 2017. S. Enteritidis, S. Typhimurium and the monophasic variant hereof accounted for about half of the total number of infections: specifically 51% of all infections in 2016 and 48% in 2017. A total of 109 different serotypes were registered in 2016 and 103 in 2017. In both years, the group Other serotypes seen in Table 3 thus comprises various serotypes, each of which occurs very rarely. Many of these serotypes are acquired during foreign travel. The share of the infections that is not comprised by the serotypes Enteritidis and (monophasic) Typhimurium has followed a decreasing trend in recent years. 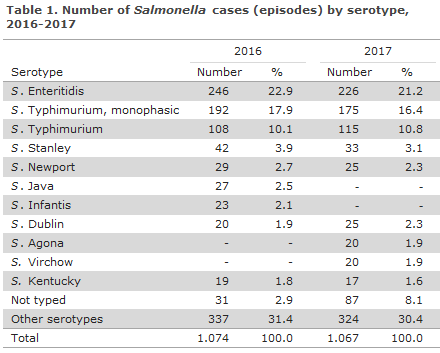 This has produced an increase in the number of detected clusters and outbreaks, see Tables 2 and 3.

Information about any infection during travels abroad was collected through telephone interviews with the patients if such information was not already given in the notifications. The patients were asked whether they had travelled abroad within a 7-day period prior to disease onset. Information about the country of infection was available for 83% of the Salmonella patients in 2016 and for 62% in 2017. Looking exclusively at the patient group for whom the country of infection is known, 55% were infected abroad in 2016 and 53% in 2017. This overall figure covers considerable variation between serotypes. For S. Enteritidis, the share of infections acquired abroad comprised 77%. For S. Typhimurium 34%, for the monophasic S. Typhimurium 30%, and for the whole group of all other Salmonella types, the share was 56%. The highest number of patients had become infected in Thailand; 154 patients. Followed by these popular tourist destinations: Turkey with 95 patients, Indonesia with 64, Spain with 50, Greece with 45, Vietnam with 33, Egypt with 27 patients and Morocco with 21 infected patients.

In Denmark, Salmonella outbreaks are typically identified via the national laboratory monitoring system, where the SSI sub-types all Salmonella isolates detected at the Danish laboratories of clinical microbiology. All outbreaks are investigated by the Department of Infectious Disease Epidemiology and Prevention in close collaboration with the Danish Veterinary and Food Administration and DTU Food to establish the source of infection and control the outbreak.

2016 and 2017 witnessed 11 and 25 reported cases of Salmonella, respectively. Tables 2 and 3. Disease outbreaks are recorded in the National Food Outbreak Database (FUD). In Denmark, Salmonella outbreaks are mostly caused by S. Typhimurium or the monophasic variant hereof. In 2016-17, a total of 14 outbreaks were recorded with these types. It was possible to establish the source of infection in six of the 14 outbreaks, and all were related to pork. The largest outbreak comprised 21 registered patients from December 2016 to April 2017 (FUD1558). Specifically, the outbreak counted 14 women/girls and 7 boys/men aged from 2 months to 94 years of age. The median age was 71 years and two people died. A comprehensive investigation with patient interviews, a case-control study, collection of patients’ purchasing data from supermarkets and food trace-back demonstrated that the source was very likely frozen meatloaf prepared as a ready-made dish that was sold in the shops of the COOP supermarket chain.

Another large outbreak observed in 2017 was an S. Typhimurium outbreak that mainly affected children (FUD1603). A total of 13 patients were reported in this outbreak in September-October 2017. Hereof, nine were men/boys and four were women/girls aged 2-63 years of age. The median age was 12 years. Results from a case-control study revealed a high probability that the outbreak was caused by so-called Fuet Coins snack sausages produced in Spain and sold in the supermarket chain Netto. The product was withdrawn from the stores on 3 November 2017. Sweden recorded a large simultaneous outbreak with S. Typhimurium; however, with a different subtype, but caused by a product from the same Spanish producer. In Denmark, four patients could be associated with the Swedish outbreak (FUD1614).

In 2016-17, twelve outbreaks with S. Enteritidis were recorded, eight of which were related to travel abroad. It was highly probable that three outbreaks - one from Denmark and two outbreaks for which various travel countries were reported - were associated with a major multinational outbreak from 2016-17 caused by Polish eggs (FUD1531, FUD1647 and FUD1650). It is, however, unclear, if the Danish patients had in fact ingested Polish eggs. In two Danish S. Enteritidis outbreaks in 2017 (FUD1581 and FUD1582), the source of infection is believed to have been almonds - but this could not be verified. 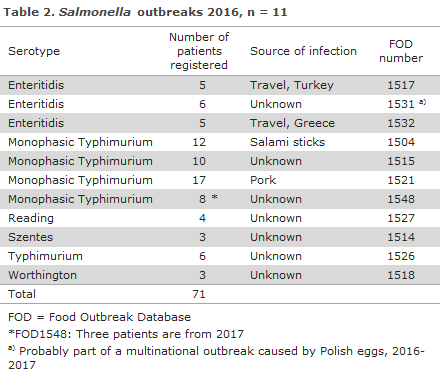 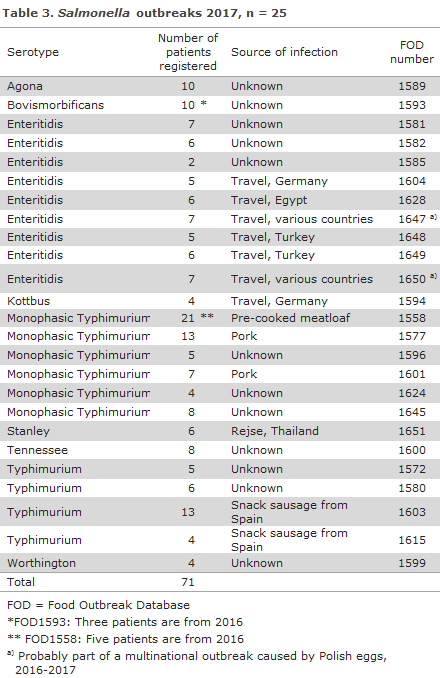