In Denmark, being bitten by a bat is normally the only indication for prophylactic treatment against rabies. If, after being bitten by other animals, there is reason to suspect that an animal has rabies, the animal should be examined by a veterinary. If the suspicion cannot be dismissed, the veterinarian notifies the Danish Veterinary and Food Administration who then provides further instructions.

In other parts of the world, rabies is more widespread. Transmission occurs through the penetrating bite of an animal that may have become infected with rabies or, on rare occasions, through direct contact between infected saliva and mucous membranes or wounds.

Post-exposure prophylaxis given to Danes in 2019

In 2019, a total of 300 persons were given treatment against rabies after having been bitten by animals suspected of having the condition. Nine of these persons had received PrEP.

In 2019, bat bites were the reason why 28 persons received post-exposure prophylaxis in Denmark. This number has increased from 21 in 2018 and 13 in 2017. Additionally, a total of 11 persons initiated rabies treatment following dog bites, typically by puppies illegally imported from abroad, primarily from Serbia.

A total of 261 Danes were possibly exposed to rabies abroad. In one person, treatment was discontinued as the dog was still alive ten days after the exposure and therefore could not have rabies.

Figure 1 shows that in the period from 2005 to 2019 and particularly since 2010, a considerable increase has been seen in the number of persons who have seen a doctor following possible exposure to rabies abroad. 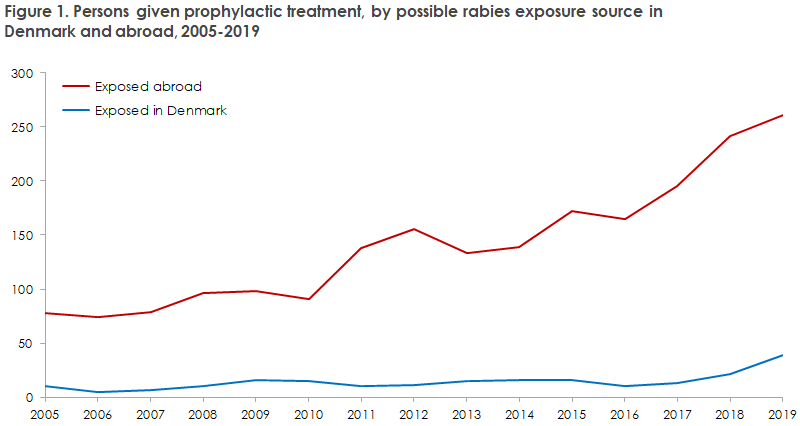 In 2019, a total of 130 (50%) persons who had possibly been exposed to rabies abroad were treated with HRIG. Among these, 67 persons (52%) received HRIG only after returning to Denmark, Table 1.

A total of 59 persons (23%) were not vaccinated until after returning to Denmark, Table 1.

The majority of those initiating rabies PEP following a bite abroad had become exposed in South-East Asia, followed by the Indian Subcontinent and Turkey. 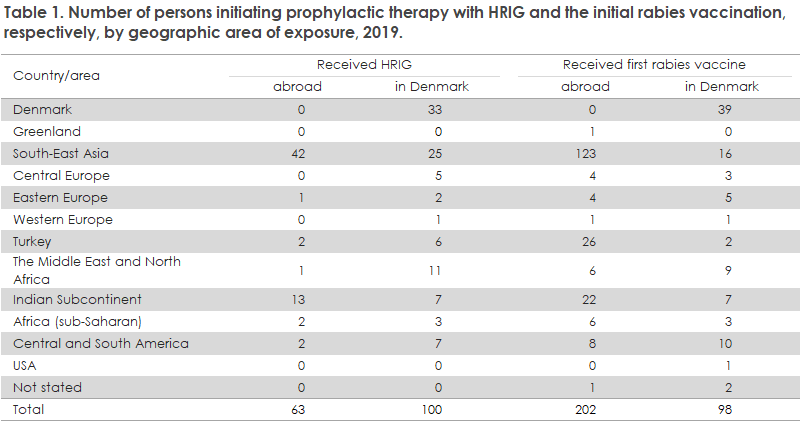 Dogs were the cause of possible exposure abroad in 144 (55%) cases. Furthermore, 58 persons were possibly exposed by monkeys and 47 by cats. Furthermore, two persons were possibly exposed by rats, two by camel saliva and one by a rabbit, a squirrel, a bat, and a fox, respectively. Additionally, two persons initiated PEP due to bites by unidentified animals. In two persons, PEP was initiated abroad without information about animal species.

Among all of those exposed in 2019, only eight persons had received PrEP before embarking on their journey.

Rabies is caused by virus of the lyssavirus family. The virus is most frequently caused by classic rabies virus or European Bat Lyssavirus (EBLV type 1 and 2), also known as bat rabies virus. Classic rabies remains endemic to parts of Eastern Europe but has been eradicated in Western Europe. Nevertheless, illegal import of pets from Third-World countries to Europe continues to pose a problem; and cases of rabies are regularly reported in dogs and cats imported from North Africa to Southern Europe. Classic rabies virus is endemic in Greenland, where Arctic foxes occasionally transmit the infection to other mammals. The latest case of classic rabies in Arctic foxes was reported in 2018.

In 2019, a total of 18 animals from Denmark were tested for classic rabies and/or bat rabies as part of passive monitoring, all of which tested negative, Table 2. In 2019, no specimens were submitted for rabies testing from Greenland, Table 2. In the first half of 2019, tests were done by DTU VET, Lindholm, and in the second half by Statens Serum Institut.

This report is also described in EPI-NEWS 18/20.