Meningococcal meningitis (ten cases) in 2020 is described in EPI-NEWS 3-5/21 and in the 2020 annual report on meningococcal disease.

Information about underlying diseases and sequelae are categorised into groups based on diagnosis codes collected from the National Patient Registry. Infections were included as from one month prior to the current meningitis case, but no time restrictions were applied for the remaining underlying diseases/predispositions. 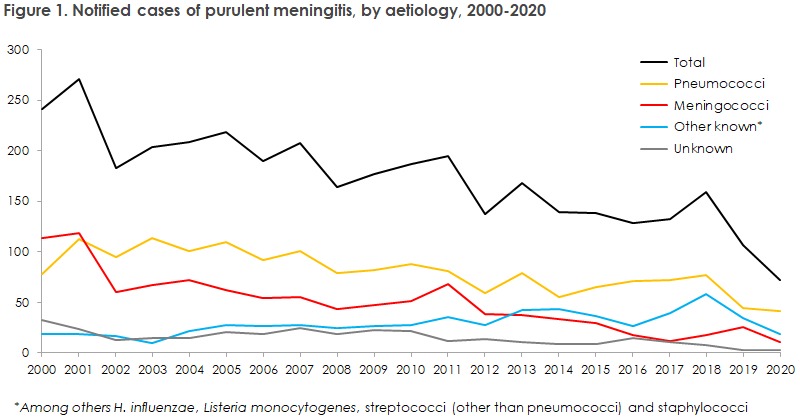 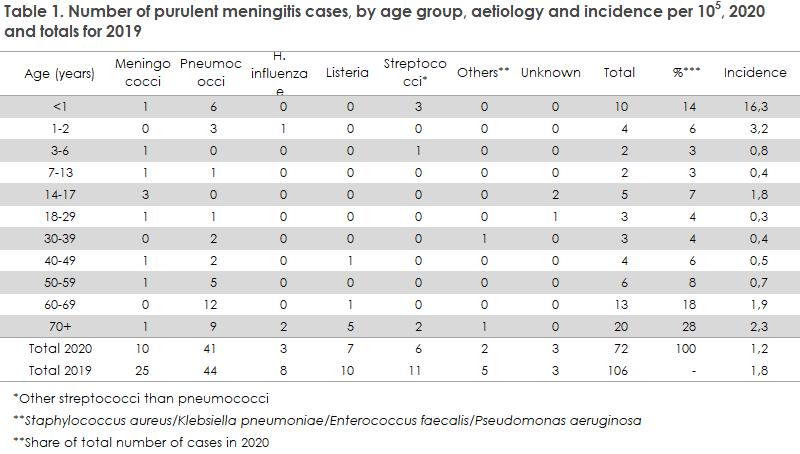 2020 saw a total of 41 notified cases of meningitis caused by Streptococcus pneumoniae of which 40 were notified. A total of 30 cases were detected by culture of cerebrospinal fluid (CSF). Another ten cases were detected by PCR in CSF. Seven of these cases also had a positive blood culture. One case was notified based on a positive blood culture, but no spinal fluid tests had been performed.

Ten persons below 18 years of age fell ill due to meningitis caused by pneumococci, including a two-year-old child affected by a serotype included in the Prevenar 13 vaccine (serotype 19A). The child had been vaccinated as recommended for its age with Prevenar 13, i.e. it had received all three doses previously, and the case was therefore notified as vaccine failure.

An additional three cases among persons below 18 years of age were caused by serotypes included in the Prevenar 13 vaccine; two cases of serotype 3 and one case of serotype 19F. The eldest of the three was approx. three months old. Due to their very young age, none of the patients were covered by vaccination.

Six cases caused by serotypes included in the Prevenar 13 vaccine occurred in persons above 18 years of age. All six patients were unvaccinated.

In 15 cases, sequelae caused by the meningitis illness had been recorded. The most frequently recorded sequela was hearing impairment (five persons) followed by visual defects/loss of vision (four persons) and epilepsy (three persons).

The patient with meningitis caused by GAS was a three-year-old child with no risk factors, who had sequelae to the disease in the form of hearing loss.

The patient with meningitis caused by GCS was 89 years old and had other underlying CNS disease but experienced no sequelae to meningitis.

The one-year-old child had meningitis caused by Hib, but had not been vaccinated in accordance with the Danish childhood vaccination programme. The child had no other underlying disease and did not experience any sequelae to the Hib infection.

Vaccination against Hib became part of the childhood vaccination programme in 1993 and the adult patient with Hib infection had therefore not been vaccinated. One of the adult patients had a risk factor in the form of CNS surgery but experienced no sequelae after the infection. The other patient had no underlying disease but experienced a sequela to meningitis disease in the form of epilepsy.

Seven cases of meningitis were caused by Listeria monocytogenes; one case aged 49 years, two cases aged 65-75 years and five cases aged 75+ years. All had become infected in Denmark. All seven patients had underlying disease, and two died due to their listeria infection.

In 2020, one case was notified of meningitis caused by Staphylococcus aureus (Staph. A), detected by PCR on CSF. This case also had a positive blood culture. The person in question had underlying disease but experienced no sequelae to the Staph A. infection

One meningitis case was caused by Pseudomonas aeruginosa (P. aeruginosa). This case was notified on suspicion of postoperative meningitis and had a P. aeruginosa positive blood culture and microscopy of spinal fluid with some polymorphonuclear and a limited number of mononuclear leukocytes. The person did not experience sequelae following the infection.

In a total of three cases (aged 15-21 years), the disease was notified on the basis of the clinical picture and/or CSF cell counts and microscopy consistent with purulent meningitis, but without detection of bacteria by culture or PCR. In one case, empirical treatment was given for meningococcal infection, whereas pneumococci were the presumed agent in one of the cases. One of the three patients had underlying disease and one had sequelae to meningitis. No patients died.

This annual report is also described in EPI-NEWS no. 36/21.