Meningococcal meningitis (25 cases) in 2019 is described in EPI-NEWS 3-5/21 and in the 2019 annual report on meningococcal disease.

Information about underlying diseases and sequelae are categorised into groups based on diagnosis codes collected from the National Patient Registry. Infections were included as from one month prior to the current meningitis case, but no time restrictions were applied for the remaining underlying diseases/predispositions. 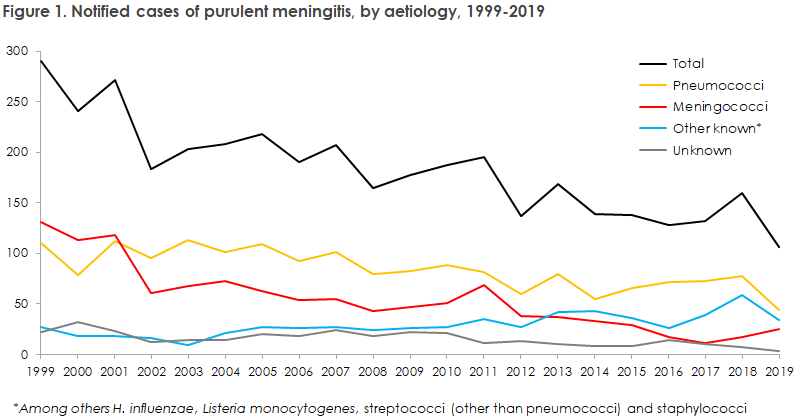 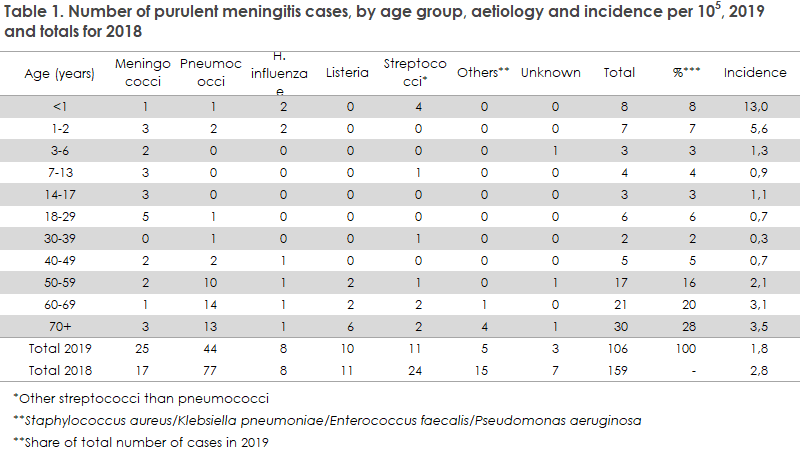 2019 saw a total of 44 notified cases of meningitis with Streptococcus pneumoniae, of which 42 were notified. A total of 27 cases were detected by culture of cerebrospinal fluid (CSF). Another 15 cases were detected by PCR in CSF. Ten of these cases also had a positive blood culture. One case was established by detection of pneumococcal antigen in the CSF and a positive blood culture.

In one case, notified by the Department of Forensic Medicine, pneumococci were detected by culture from a cerebral abscess.

An additional seven cases, all among persons aged more than 18 years, were caused by serotype 3, which is included in the Prevenar 13 vaccine. None of the patients had been vaccinated.

None of the cases had been vaccinated.

In 23 cases, sequelae caused by the meningitis illness had been recorded. The most frequently observed sequela was hearing impairment/loss (nine persons). A total of nine patients died due to their pneumococcal infection. The mean age of the deceased was 71 years.

Meningitis due to other streptococci than pneumococci was detected in 11 cases.

Among the four GAS cases, two occurred in children: one child aged zero years and another child aged seven years. The seven-year-old child had risk factors in the form of congenital malformations and splenectomy. The child had sequelae from the meningitis disease in the form of visual defects/loss of vision. The infant, who had no other underlying conditions, died due to the GAS infection.

Among the six GBS cases, one patient fell ill within 0-6 days after birth, i.e. the patient had become infected at birth (termed EOD - early-onset disease). Two patients had become infected 7-90 days after birth (termed LOD - late-onset disease). The three remaining cases occurred in adults aged more than 60 years. The infant with EOD had disease risk factors (prematurity), but suffered no sequelae due the GBS infection. The two infants with LOD did not have risk factors for disease, but both had sequelae to their GBS infection in the form of hearing loss. All of the three adults had other underlying disease and one of these patients had sequelae of the meningitis disease, whereas another patient died due to the GBS infection.

The case with non-haemolytic streptococci was caused by Streptococcus constellatus in a person aged 54 years. S. constellatus forms part of the normal flora, among others in the oral cavity and intestines, but may occasionally cause disease in other parts of the body. The patient had underlying disease and died due to the S. constellatus infection.

All of the 11 cases were detected in CSF; seven by culture and four by PCR.

A total of eight cases of meningitis caused by Haemophilus influenzae were notified. All cases were detected by culture of cerebrospinal fluid. Among the eight cases, two were caused by H. influenzae of serotype b (Hib). Both of these cases occurred in patients aged less than one year. One of the children had been vaccinated in accordance with the Danish childhood vaccination programme with two of the three vaccinations containing the Hib component, of which the more recent one had been given four months prior to symptom onset. This case was notified as vaccine failure. The other child had received its first Hib component vaccination two days before symptom onset and was therefore not a case of vaccine failure. The two children with Hib infection did not have underlying disease. One of the two children had sequelae to meningitis in the form of hearing loss.

Among the remaining six cases, one had serotype f and five cases could not be typed; one patient aged one year, one patient aged two years and four patients aged between 47 and 84 years. Four of these six patients had underlying disease, and one patient had sequelae to meningitis. None of the patients died due to their H. influenzae infection.

Ten cases of meningitis were caused by Listeria monocytogenes; two cases aged 53 years, three cases aged 65-75 years and five cases aged 80+ years. All had become infected in Denmark. Nine of the patients had other underlying disease. Two patients died due to their listeria infection.

In nine patients, the diagnosis was made by culture of CSF and in one patient by PCR on CSF.

In 2019, one case of meningitis caused by Staphylococcus aureus and one case caused by Pseudomonas aeruginosa were recorded. Both patients had underlying disease and the patient with pseudomonas infection died due to the infection.

Two cases of meningitis caused by Capnocytophaga canimorsus were notified. Both patients were more than 70 years old. This bacterium forms part of the normal flora in the oral cavity of cats and dogs. Both patients had come into close contact with a dog. One of the cases was detected by CSF culture. The second case was notified on the basis of meningitis symptoms combined with detection of the bacterium by blood culture. None of the patients had sequelae to meningitis.

One case of purulent meningitis was notified based on CSF microscopy with findings of mononuclear and polymorphonuclear leucocytes and very limited growth of Neisseria macacae and Neisseria flavescens/subflava and Haemophilus parainfluenzae in spinal fluid culture. These bacteria all form part of the normal flora in the upper airways, but may in rare cases cause infection in the CNS, among others. The mentioned patient had underlying cardiac, pulmonary and metabolic disease. According to the notification of the case, the patient also had a risk factor in the form of ear-nose-throat- and neuro-surgery. The patient did not develop sequela to meningitis.

In a total of three cases, patients were notified on the basis of clinical suspicion and/or CSF cell counts and microscopy consistent with purulent meningitis, but without detection of bacteria by culture or PCR. One of these cases had initiated antibiotics treatment before a lumbar puncture had been performed. All three patients had other underlying disease, one patient died due to meningitis, whereas one patient developed sequelae in the form of epilepsy.

This annual report is also described in EPI-NEWS no. 36/21.