Meningococcal meningitis (17 cases) in 2018 is described in EPI-NEWS 40/19 and in the 2018 Annual Report on meningococcal disease.

Information about underlying diseases and sequelae is categorised into groups based on diagnosis codes collected from the National Patient Registry. Infections were included as from one month prior to the current meningitis case, but no time restrictions were applied for the remaining underlying diseases/predispositions. 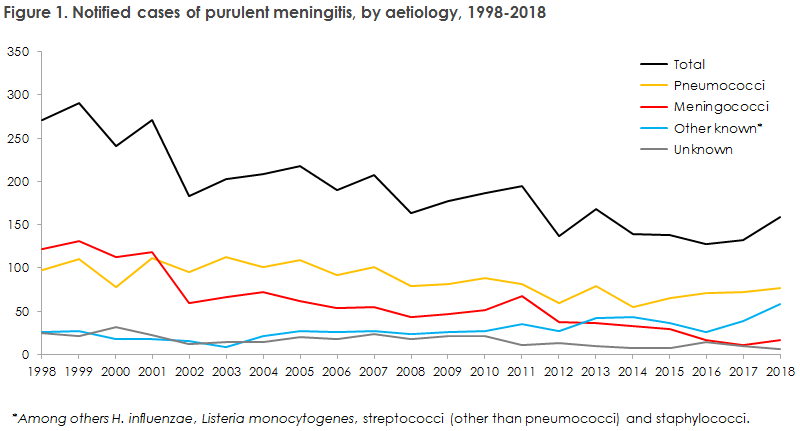 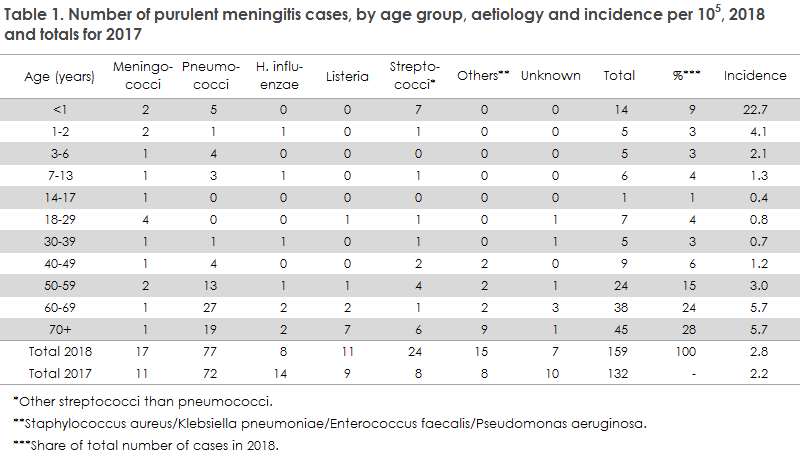 2018 saw a total of 77 notified cases of meningitis with Streptococcus pneumoniae, of which 76 were notified. A total of 51 cases were detected by culture of cerebrospinal fluid (CSF). Another 21 cases were detected by PCR in CSF. Seven of these cases also had a positive blood culture. Two cases were notified with pneumococci established by the combination of blood culture, leucocytes by CSF microscopy and clinical presentation (one of the cases was a relapse approx. two months after an initial case of pneumococcal meningitis). Two cases were detected through pneumococcal antigen in CSF and increased counts of leucocytes and bacteria found by CSF microscopy. One case was notified based on the clinical picture alone.

The figures provided in the present report diverge from the figures of EPI-NEWS 40-41/18  on pneumococcal disease and coverage of pneumococcal vaccination in the childhood vaccination programme 2018, as the case definition is broader in the current report, among others because it includes meningitis notified exclusively on the basis of clinical suspicion.

Thirteen persons below 18 years of age fell ill due to meningitis caused by pneumococci, including a five-month old child affected by a type included in the Prevenar 13 vaccine (serotype 19A). The child had been vaccinated as recommended for its age with Prevenar 13, i.e., had received the first dose two months previously. This was not a case of vaccination failure, as two vaccine doses had not been given.

An additional six cases among persons >18 years were caused by serotypes included in the Prevenar 13 vaccine; all six were serotype 3 cases. None of the patients had been vaccinated.

Among the 77 cases, information about underlying conditions was available for 51 patients, among whom two also had an infection. Two persons had infections before falling ill, but no underlying disease. Among the four who had infections before falling ill, two had an infection in the middle ear, one had pneumonia and one had another infection (not specified).
In 33 cases, sequelae caused by the illness had been recorded. The most frequently observed sequela was hearing impairment (15 persons). In one case, a child relapsed approx. two months after the initial case. Therefore, it was not possible to determine the child’s serotype.

A total of six patients died due to their affection: a 1-year-old child and five patients who were all older than 67 years of age. The child as well as four of the adults had underlying disease.

Meningitis due to other streptococci than pneumococci was detected in 24 cases.

Among the nine GBS cases, two of the patients fell ill within 0-6 days after birth, i.e. they had become infected at birth (termed EOD - early-onset disease). Four patients had become infected 7-90 days after birth (termed LOS - late-onset disease). Furthermore, three cases occurred in adults older than 54 years of age. Two of the six neonates had risk factors: one was premature and the other had previous infection and lung disease. Only one of the six neonates suffered sequelae (hearing impairment or loss). All of the three adults had underlying conditions; two suffered sequelae, but these were not further specified.

Among the seven GAS cases, three occurred in children aged 0-7 years. One of the children had congenital malformations and underlying disease. The child suffered no sequelae from the condition.

Eight cases were notified with H. influenzae, including three with serotype B in patients aged 2, 39 and 69 years of age, respectively. Two cases were detected by CSF culture and one case by blood culture and clinical meningitis. The two-year-old child had been vaccinated in accordance with the Danish childhood vaccination programme with all three vaccinations containing the Hib component, and these cases were therefore cases of vaccination failure. Vaccination against H. influenzae became part of the childhood vaccination programme only in 1993 and the two adults had therefore not been vaccinated. Among the other five cases, i.e. one patient aged 12 years and four patients aged 54-77 years, one case of serotype a was detected; one serotype f, two non-capsular cases and one case had not been serotyped.

Eleven cases of meningitis were caused by Listeria monocytogenes; two cases aged 19 and 52 years, respectively; two cases aged 60-69; and seven cases in patients aged 70-92 years of age. All had become infected in Denmark. The ten oldest patients (52-92 years) had underlying disease. Three patients died due to the condition.

In four patients, the diagnosis was made on culture of CSF, in one patient by PCR in CSF, and in six on the clinical picture and positive blood culture.

Nine patients, aged 46-96 years, had meningitis caused by Staphylococcus aureus. Seven patients had underlying disease, three of whom died due to the condition. The remaining six suffered no sequelae to their meningitis disease.

In a total of seven cases, patients were notified on the basis of the clinical picture and/or CSF cell counts and microscopy consistent with purulent meningitis, but without detection of bacteria by culture or PCR. One of these cases had initiated treatment before a lumbar puncture had been performed. All seven patients had underlying disease/risk factors, and two died due to the condition.

This annual report is also described in EPI-NEWS 50/19.