Of the 64,038 tested pregnant women, a total of 132 (0.21%) were HBsAg positives, which is at par with the level observed in previous years. A positive HBsAg (hepatitis B surface antigen) indicates a current acute or chronic hepatitis B virus infection.

The Department of Infectious Disease Epidemiology and Prevention at the SSI sends out reminders for notification of hepatitis B if no current or previous notification has been made. Therefore, all except for two pregnant HBsAg positives were reported to the statutory national notification system in 2017. HBeAg, a marker for disease activity associated with an increased risk of intrauterine mother-to-child transmission, was detected in 10 (8%) of the women.

As in previous years, the majority of HBeAg-positive women were from South-East Asia, Table 1. No women of Danish origin were HBeAg-positive. 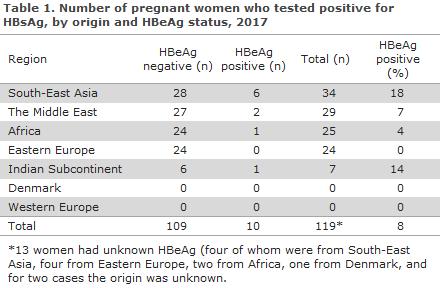 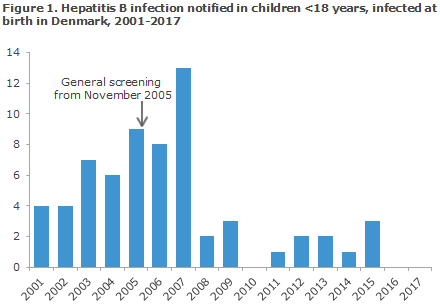 A total of eight women had newly detected HIV and 25 were known HIV positives.

Among the newly detected HIV-positive pregnant women, five were from Africa, two were from Thailand and one was from Denmark, Table 4. Two had immigrated in 2015 and one had emigrated in 2004, 2011, 2012 and 2013, respectively. For one person, the time of immigration remained unknown.

The other woman was tested for HIV in her 39th week due to symptoms. She tested HIV positive at this time after having tested HIV negative in the beginning of her pregnancy.

Among the 62,914 pregnant women who were screened for syphilis in 2017, 96 tested positive. The majority of these women were false positives or had antibodies from previous syphilis. The confirmatory test makes it possible to identify both the false positives/previously infected cases and the pregnant women who currently have syphilis. Confirmatory serological tests were performed in 95 of the women (99%). Current syphilis was established in ten of these cases, corresponding to 0.02% of all the screened pregnant women.

Of the ten positives, eight were of Danish origin, and one was from Africa and Eastern Europe, respectively.

All ten women were notified via the statutory national syphilis notification system.

One woman did not have the confirmatory test performed despite several requests from the SSI to do so.

No cases of congenital syphilis were notified during 2017.

This report is also described in EPI-NEWS 36/18.