Based on presumed mode of infection, MRSA is categorised into the following categories: acquired abroad, hospital-acquired, community-acquired and livestock-associated. In Denmark, livestock MRSA is nearly always caused by the CC398 MRSA type, which is closely associated with live pigs.

Community-acquired MRSA is further divided according to whether the person has had contact to hospitals or the nursing sector (nursing homes, etc.) within the past 6 months, and if the person has come into contact with a known MRSA-positive person.

Table 1 shows the distribution of notified MRSA cases by presumed mode of transmission. 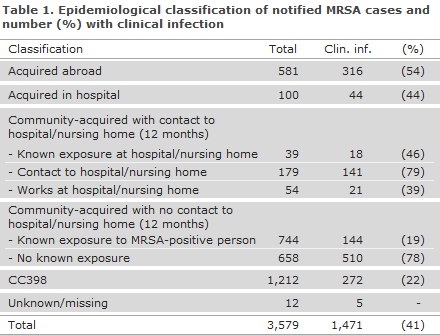 In 1,471 cases (41%), sampling was performed due to clinical infection. In 46 cases, MRSA was isolated from blood, corresponding to 2.2% of all S. aureus bacteraemia cases, which is in line with the level observed the previous year (41 cases, 2.1%). A somewhat higher number of hospital-acquired infections was recorded in 2017. In 44 patients and 19 hospital staff members, an MRSA infection was detected, whereas the total number in 2016 was 43. The number of community-acquired infections increased slightly in 2017 to 654, whereas the preceding years recorded 456 cases in 2014, 500 in 2015 and 607 in 2016, Figure 2. In 144 cases of community-acquired clinical infection, there was known exposure to MRSA, Table 1. The number of community-acquired clinical infections in which there was known contact to a hospital or to the nursing sector within the previous 6 months has remained nearly identical since 2014 (155 in 2016, 133 in 2015, 140 in 2014), Figure 2. 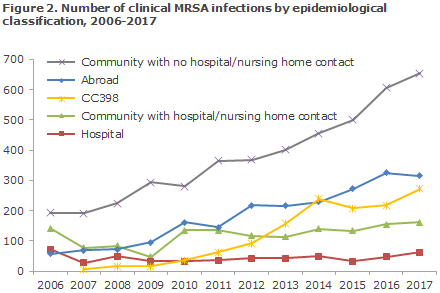 MRSA of the CC398 type was detected using specific PCR analysis, which also showed if the strain was of the livestock MRSA type (n = 1,212) or a human variant (n = 39). Isolates with a characteristic livestock MRSA CC398 profile were typically not spa-typed.

Via the notification forms and typing of the submitted isolates, a total of 14 outbreaks were identified at hospitals, nursing homes and other institutions, comprising a total of 105 MRSA cases, including 21 with infection and 84 detected by screening. Among the 14 outbreaks, four occurred in neonatal departments and three in surgery departments. Two outbreaks in neonatal departments comprised 26 (spa-type t005) and 24 (spa-type t690) cases, respectively. Hereof, the majority (24 and 22, respectively) were carriers. The remaining outbreaks counted 2-9 cases.

The Staphylococcus Laboratory at Statens Serum Institut offers whole-genome sequencing of all outbreak isolates, i.e. characterisation of the isolates beyond spa-type determination. If an outbreak is caused by a clone within a commonly occurring spa-type, whole genome sequencing may provide an important contribution towards identifying which isolates form part of the outbreak, and which do not. Thereby, the exact extent of the outbreak may be determined more precisely.

All four patients remained alive 30 days after their sampling date.

The number of imported cases decreased from 712 in 2016 to 584 in 2017, corresponding to 16% of the total number of cases. One of the causes explaining this decrease is the lower number of refugees arriving to Denmark in 2017 compared with the preceding years. Finding of MRSA in asylum seekers was reported separately as from 2015 as these cases are often from areas with a high MRSA incidence, and in Denmark this group is offered treatment only if the logistic conditions permit so. In 2017 a total of 119 new MRSA cases among asylum seekers and people who were family reunified with asylum seekers were recorded. This is a considerably lower number than in 2016 (417).