In Denmark, invasive meningococcal disease (MD) is monitored via the clinical notification system (Form 1515) handled by the Department of Infectious Disease Epidemiology and Prevention and by the Neisseria and Streptococcal Reference Laboratory, which receive meningococcal isolates and other biological material from the departments of clinical microbiology (DCM). MD covers meningitis, sepsis and culture or DNA detection of meningococci in material from normally sterile locations, e.g. joints.

MD occurred in all age groups, see Table 2. The median age was 21 years (range 0-80 years). The highest incidence was seen in children aged less than one year and in the 14-17-year age group. The distribution of cases between the sexes was equal with an M/F ratio of 0.9. No boys below 14 years of age were affected, and therefore the 14+ year group counted more men than women.

Among the 19 patients, four had meningitis, eight had sepsis and five had both meningitis and sepsis. Additionally, in two patients meningococci were found in synovial fluids only.

All patients had become infected in Denmark.

Underlying diseases/predispositions and sequelae were established by linking the civil registration numbers (CPR) recorded during the MD monitoring to data from the National Patient Registry. 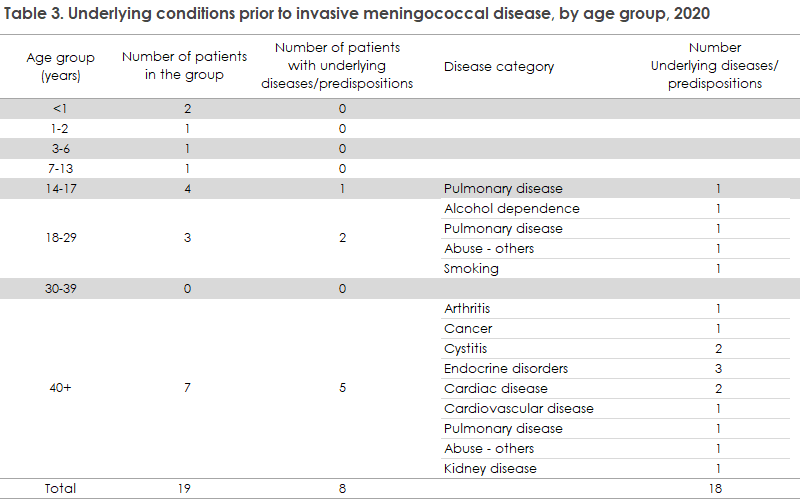 Sequelae were recorded in six patients following MD in 2020. Two were registered with headache, one needed rehabilitation, one had hearing impairment or hearing loss recorded, one patient had abnormal involuntary movements and one had another/unspecified finding in the nerve and muscoloskeletal system recorded. 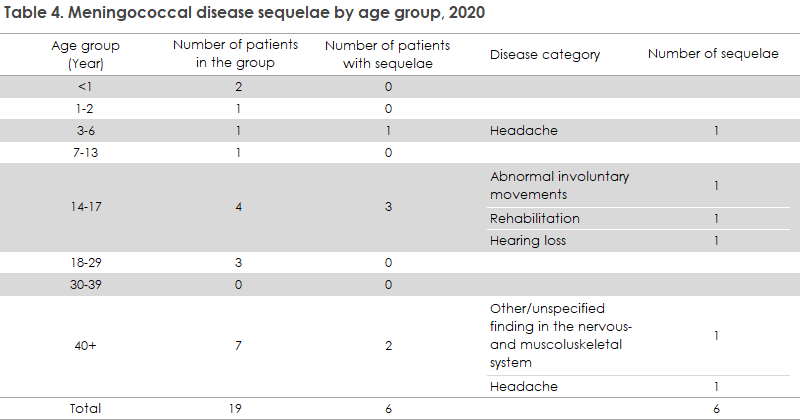