In Denmark, invasive meningococcal disease (MD) is monitored via the clinical notification system (Form 1515) handled by the Department of Infectious Disease Epidemiology and Prevention and by the Neisseria and Streptococcal Reference Laboratory, which receive meningococcal isolates and other biological material from the departments of clinical microbiology (DCM). MD covers meningitis, sepsis and culture or DNA detection of meningococci in material from normally sterile locations, e.g. joints.

MD occurred in all age groups, see Table 2. The median age was 38 years (range 0-88 years). The highest incidences were recorded among patients aged 1-2 years and 14-17 years. The distribution of cases between the sexes was equal with an M/F ratio of 1.0. Among patients aged 14 years or above, more women than men were affected by MD (26 and 20, respectively), whereas the group aged less than 14 years comprised more boys than girls (eight and two, respectively).

Among the 56 patients, 13 had meningitis, 29 had sepsis and 12 had both meningitis and sepsis. Additionally, one patient had clinical symptoms corresponding to meningococcal disease which had not been further described in the notification. In this final case, the diagnosis was made by autopsy with findings of meningococci in the liver, lungs, spleen and heart. In one patient, meningococci were found in both the blood and in synovial fluids.

In 17 of the patients, MD was caused by group B (30%), whereas two patients had group C (4%), eight had group Y (14%), 23 had group W (41%) and one had group X (2%). For five patients (9%), the group was unknown. Hereof, one case could not be grouped, in one case the diagnosis was made based on an increase of the antibody level, and in three cases the diagnosis was based exclusively on the clinical picture.

In two cases, the country of infection was uncertain, as the patients had stayed in Hungary and on Lanzarote, respectively, before falling ill. The remaining patients had become infected in Denmark.

In 2015-2018, the total annual number of MD cases remained stable around 40, but the number increased to 56 in 2019. This increase was mainly attributable to an increase in cases caused by group W and, to a lesser degree, group Y. In 2019, group W was the most frequently occurring group and the second most frequent was group B. The majority of the group W cases occurred in patients aged more than 40 years, and group W was not recorded in children below 14 years of age. In contrast, group B occurred in all age groups, but more frequently among children and young adults. Figure 1 presents MD by serogroups for the years 2007-2019.

Phylogenetic testing of meningococci isolates facilitates the study of genetic links between meningococci found in isolates from patients in Denmark and internationally. Genotyping is used in the phylogenetic tests and requires an isolate, which means that cases diagnosed by PCR alone are not included. Phylogenetic testing has shown that the majority of cases of group W meningococci in Denmark are caused by a subgroup coined UK Novel CC11. This subgroup has been known since 2013 and is found across Europe. Additional phylogenetic testing has shown that within this subgroup, a subclone evolved in 2016 that has only been recorded in Denmark. In 2019, the Danish subclone caused 15 of the 23 group W cases. An epidemiological study of persons who have become infected by the Danish subclone has shown that the subclone is mainly found in Jutland, and in 2019 it was recorded in South Jutland (n=3), East Jutland (n=8) and in North Jutland (n=4). All cases were sporadic and no outbreaks with the Danish subclone have been recorded.

Underlying diseases/predispositions and sequelae were established by linking the civil registration numbers (CPR) recorded during the MD monitoring to data from the National Patient Registry. 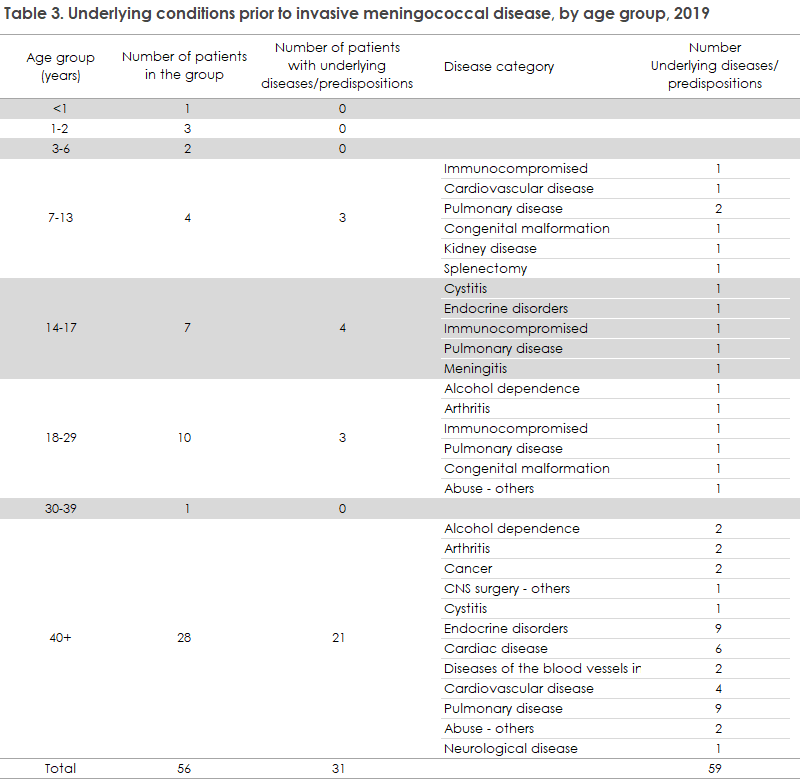 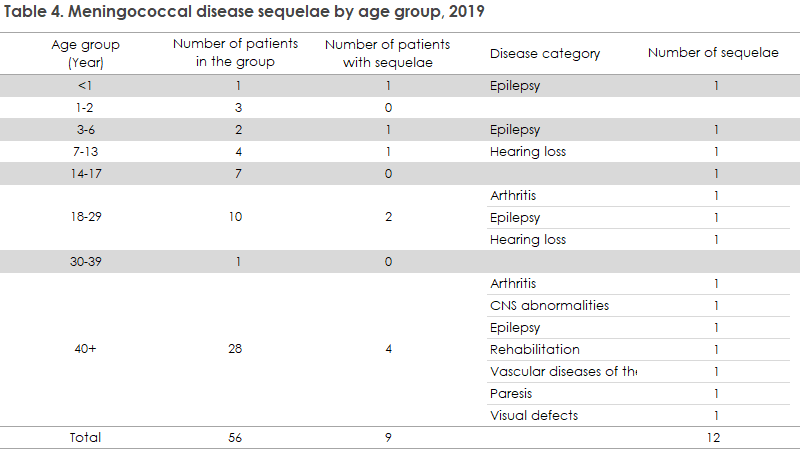