In 2018, the Danish Departments of Clinical Microbiology (DCMs) and Statens Serum Institut (SSI) detected a total of 64 cases of malaria imported to Denmark, Table 1. The annual report is based partly on mandatory notifications submitted to the SSI, partly on supplementary data extraction from the Danish Microbiology Database (the MIBA). The DMCs notified 44 cases, but according to the MIBA, an additional 20 malaria cases were diagnosed in Denmark in 2018, but not notified to the SSI. In cases with missing information about country of infection, such information was obtained by contacting the hospitals.

Table 1. Number of malaria cases imported to Denmark, by place of infection and type of malaria, 2018.

Of the 64 malaria cases, the majority (85 cases, 91%) were acquired during travel in Africa, geographically equally distributed between countries located in Western, Eastern and Southern Africa, respectively. Only five cases were acquired in Asia, including four in Afghanistan, whereas a single case was acquired in either Thailand or Malaysia in Southeast Asia. A single malaria case was acquired in Papua New Guinea in Oceania, whereas no cases were observed from Central or South America in 2018.

The median age for the reported malaria cases was 37 years (range 4 to 73 years). Slightly more male than female travellers had become infected, 37 and 27 persons, respectively.

A majority of 42 (66%) of all imported malaria cases were seen in travellers of non-Danish origin, including five cases in children below 10 years of age.

In Denmark, one death due to malaria was recorded in 2018: A Danish man returning from West Africa. The specifics of the disease course currently remain unknown. 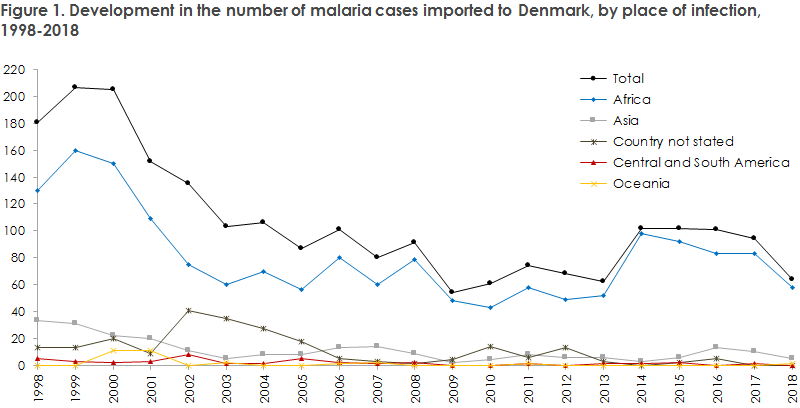 This report is also described in EPI-NEWS 27a/19.