Leptospirosis is a zoonosis; a condition that is transmitted between animals and humans. It is caused by infection with spirochetes from the bacterium species Leptospira, which is found naturally in the urine of many mammals.

In Denmark, bacteria from rats and mice are the primary cause of the condition in humans. Dogs and larger mammals, such as cattle and pigs, may also become infected and fall ill due to leptospira. Leptospirosis is individually notifiable, and the diagnostics are performed at Statens Serum Institut exclusively.

2019 saw a total of 14 notified cases of leptospirosis; two women and 12 men aged 20-66 years. This is less than in the 2017-2018-period when a minor outbreak was seen in connection with a swim-run race in Denmark and also relatively more cases had become infected abroad.

Figure 1 presents the number of notified cases acquired in Denmark and abroad and the number of laboratory-detected cases recorded in the 2015-2019 period.

Among the leptospirosis patients who had become infected in Denmark, one person was from Zealand, five from the island of Funen and three from West and South Jutland. The distribution of the cases that were acquired in Denmark may possibly be explained by a heightened local attention to the condition in wetlands (as, e.g., in South Denmark), where rodents are more common, Figure 2.

Eight of the nine leptospirosis cases that were acquired in Denmark are believed to be occupational infections. This includes three cases infected via agricultural work, i.e. animal barn work. The remaining five cases were notified as possible occupational exposure from direct contact to rats or contact to freshwater in the form of sewer or river water associated with a risk of exposure to infected rat urine. In one of the cases, the source of infection was unknown.

Figure 2. Map of the recorded leptospirosis cases, acquired in Denmark, per 100,000 inhabitants, by area, 2019 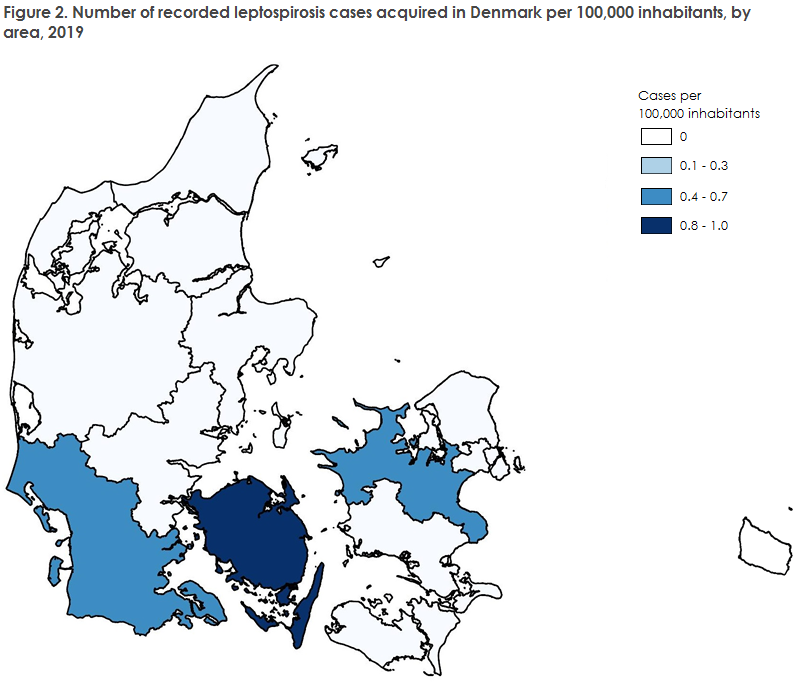 Leptospirosis may be treated with penicillin or other antibiotics. No human vaccine is available, but dogs are frequently vaccinated against the condition.

Leptospira diagnosis may be made by PCR and/or by detection of antibodies to the bacterium in the patient’s blood and urine. As leptospirosis is typically only suspected after a few days with symptoms and after antibiotics treatment has been initiated, it may, in some cases, be difficult to obtain samples suitable for PCR diagnostics. Before antibiotics treatment is initiated, leptospira may be detected in urine and blood samples during the first week of the disease course and then in the urine only for another few weeks. A negative PCR result does not exclude leptospirosis and should always be performed in conjunction with an antibody test.

Antibody measurement remains the better diagnostic method for leptospirosis. A serum sample is taken as early as possible in the disease course and another serum sample is then taken between the seventh and tenth disease day. The two results from the antibody tests are compared, and a titre increase (if any) determines if the patient has a leptospirosis infection.

The analyses used for antibody detection consist of serology (R-343) by micro-agglutination test (MAT) during which tests are performed for 17 Leptospira serovar; detection of DNA by PCR for the Leptospira (R-065) species and presence of bacteria by PCR and Leptospira (R-1350) culture. The recommended materials for PCR are blood, urine or spinal fluid, if possible obtained before the initiation of antibiotic treatment.

This annual report is also described in EPI-NEWS 13/20.