A total of 278 cases of LD were notified with symptom onset in 2017. A total of 173 (62%) were men; the median age was 63 years for men and 68 years for women. A total of 210 cases are considered to have become infected in Denmark. The median age for these persons was 69 years (range 24-101 years), and 129 (61%) were men. For 50 patients, at least one pre-disposing factor was known. A vital status report showed that 30 patients (11%) died within 60 days after having been diagnosed with LD. In 2017, infection from a hospital or nursing home was associated with an unusually high mortality rate of 57%. The number of cases is listed by infection categories in Table 1.

Table 2 shows the number and incidence per 100,000 of notified cases of LD acquired in Denmark in 2017 by region and area, compared with the incidences for 2015 and 2016. The highest incidences were detected on the island of Funen (7.3 cases per 100,000) and in East Jutland (5.3 cases per 100,000). Other areas had lower disease densities, particularly the city of Copenhagen and North and West Jutland (1.1 to 2.2 cases per 100,000). An increase in the number of cases was recorded in the majority of Danish areas compared with 2016, except for the city of Copenhagen, North Jutland and the island of Bornholm, and only a modest increase was seen in West Jutland. 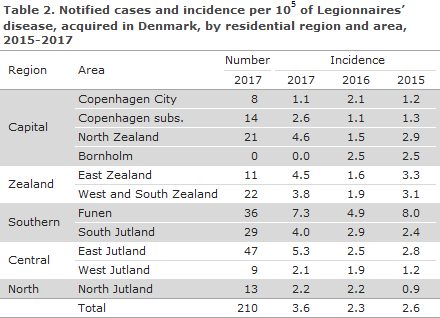 Among a total of 166 cases with presumed or known community-acquired infection in Denmark, 89 cases were culture-verified. Thirteen of the 166 cases died in connection with their LD. In 28 cases, it is known that suspected sources in the person’s home or elsewhere had been tested. In 13 of these cases, there was agreement between the typing results of isolates from patients and water/environmental samples. In nine of the tested cases, no patient isolates were available for comparison with isolates from the environment. For eight of these cases, Legionella pneumophila was detected in the investigated water systems. Legionella was cultured from all but one of the 28 tested sites.

A total of 28 cases with probable or definitely institutionally associated infection were notified; 19 from hospitals and nine from nursing homes. Sixteen of the 28 patients died in connection with their legionella infection, which corresponds to an unusually high 57% mortality for this infection category. Thirteen cases were verified by culture; in 11 of these cases, water samples were tested. The results from the tests confirmed that seven of the cases were due to infection from the institutions’ water (two nursing homes and five hospital departments).

A total of 68 cases were probably infected during travels abroad, none of whom died. A total of 54 of the cases were notified to the ECDC, of which 21 formed part of international clusters with two or more cases from one or more countries. The most frequent travel destinations were: Italy with 11 cases, Spain with 10 cases, Thailand with 9 and Greece with 6 cases. In total, cases were associated with travel to 22 countries. Two patients were presumed to have become infected in France and another two in Turkey - countries which recorded quite a few more cases in the preceding years, see Table 3.

Legionnaires’ disease can be diagnosed by culture, Legionella urinary antigen test (UAg), significant increase in serum immunoglobulin or by PCR (or other nucleic acid test). Legionella was isolated by culture from 133 patients; one isolate was not received for serogrouping. The distribution by species and serogroups is presented in Table 4. In addition to serogrouping, the sequence type (ST) of the clinical Legionella pneumophila isolates was also established by whole-genome sequencing. A total of 52 different sequence types were detected, which is a considerable increase from 2016 when a total of 30 different sequence types were found. As was the case in previous years (EPI-NEWS 46/2012), the most frequent ST was ST1 (belonging to serogroup 1) with 26 isolates (20%). ST87 (primarily serogroup 3) comprised an unusually high share in 2017; 19 cases (15%).

For all categories of Legionnaires' disease, a higher number of cases was detected than in previous years. A 58% increase relative to the average of 2015 and 2016 was recorded. The share of cases with the most infectious legionella type (serogroup 1 Pontiac) in 2017 was in line with the share recorded in previous years, but several more sequence types were detected I 2017 than in 2016. In other words, the Legionella pneumophila population that caused LD in Denmark in 2017 was very diverse. The rest of Europe also recorded a marked increase in the number of cases of 30%, see Figure 1. Thus, the increase was presumably not caused by local conditions exclusively.

Even so, the uneven distribution across Denmark seems to indicate that local (and unknown) conditions also play a role. In 2018, two working groups were established under the Danish Transport, Construction and Housing Authority and the Danish Health Authority, respectively. The working groups aim to identify possible causes to the general increase and to describe how existing preventive measures may be upheld and supplemented. Furthermore, several studies are being conducted at Statens Serum Institut to identify special Danish factors that may help to explain the increase in the number of Danish LD cases.

This annual report is described in EPI-NEWS 45/18.