This report comprises all cases of laboratory-confirmed whooping cough in Denmark in 2017, detected either by culture, PCR or serology at a department of clinical microbiology or at Statens Serum Institut (SSI). The data analysis is based on automatic registrations in the Danish Microbiology Database (MiBa). A separate report on notified cases of whooping cough in children below 2 years of age is shown below.

A total of 1,068 whooping cough cases were detected in 2017, corresponding to an incidence of 18.5 per 105. This figure covers a high incidence in the two first months of the year, followed by a stable, normal level in the remaining months of the year. With an overall incidence of 36.6 per 105, EPI-NEWS 14/17, the 2016 epidemic has thus concluded.

The number of cases and incidence per area in the 2014-2017 period are presented in Table 1. Data from previous years are available in the EPI-NEWS archive and under Numbers and Graphs (In Danish). 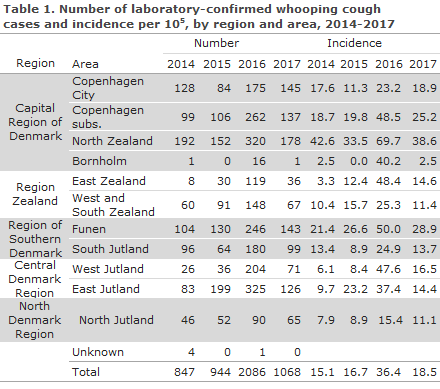 The whooping cough occurrence was high during the epidemic in the summer and autumn of 2016, but quickly levelled out in the spring of 2017, Figure 1. Considerable regional differences were observed with a clear epidemic peak in the Capital Region of Denmark, but a nearly unchanged level in the North Denmark Region. 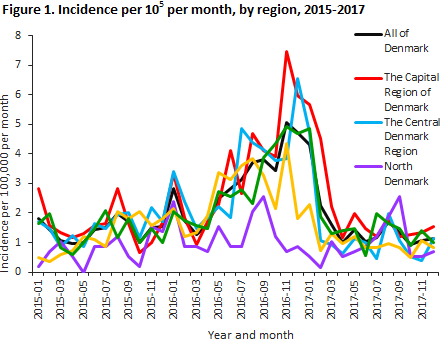 Distribution by age and age-specific whooping cough incidence are presented in Table 2. The highest incidence was recorded among infants below 1 year of age (see “Whooping cough in children below 2 years of age below) and among older children in the 6-15-year age group. 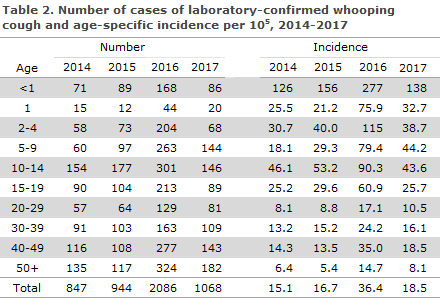 The number of cases observed in 2017 is presented by age and sex in Figure 2. 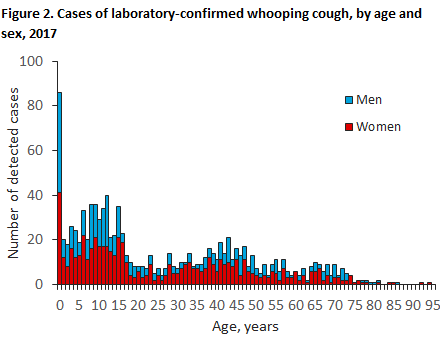 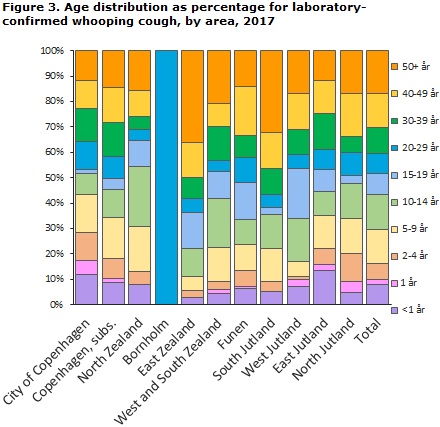 As in previous years, PCR was the most widely used method for detection of whooping cough (84.5%). Serology was used in 15.4% of the detected cases and culture in 0.1%.

Serology should be used for whooping cough diagnostics only in persons aged 8 years or older as antibodies from whooping cough vaccinations may interfere with the analysis for a few years after vaccination. Serology is particularly well-suited for diagnosis of adults, which is also reflected in the distribution showing diagnostic method by age, Figure 4. PCR and serology complement each other as PCR can be employed only in the initial 2-3 weeks of the disease course, whereas serology can be used only after a few weeks with symptoms. 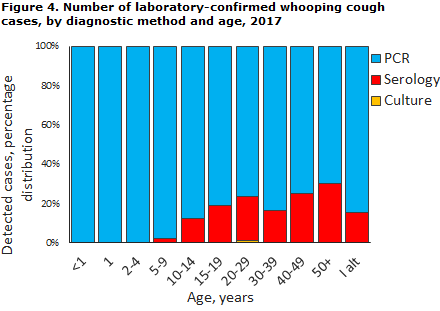 2017 saw a total of 107 notified cases of whooping cough in children below 2 years of age, equally distributed among the sexes. Small differences between the number of laboratory-confirmed (n=106) and notified cases below 2 years of age are caused by different registration and reporting procedures at year’s end. The age distribution in months for children below the age of 2 years is presented in Figure 5.

Among the 107 notified children below 2 years of age, 57 (53%) were unvaccinated, whereas 16 (15%) had received all three whooping cough vaccinations (DiTeKiPol/Hib® or Hexyon®). 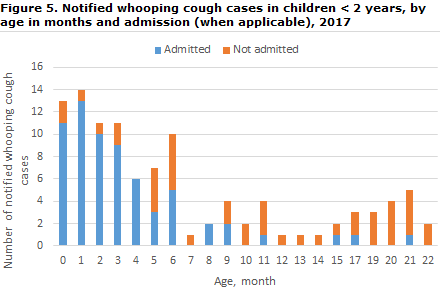 Among the 107 cases notified, a total of 65 (61%) were admitted for one or more days, Figure 5. Among infants below 5 months of age who had received a maximum of one vaccination, 49 of 55 (89%) were admitted. As shown, the young unvaccinated or partly vaccinated children are more affected by the condition and require admission to hospital, Figure 6. Conversely, only 3 of 19 children (16%) who were 12 months or older were admitted to hospital. 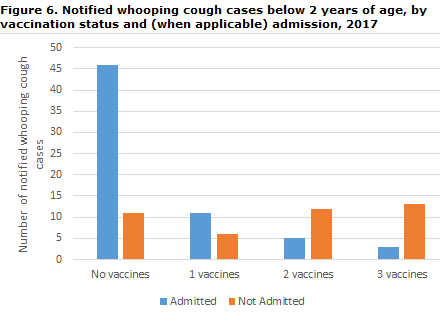 Based on the notifications, no deaths due to whooping cough were recorded in this age group in 2017.

The source of infection was known in 53% of the notified children. Among the known sources of infection, siblings and other household members comprised 86%. In addition, transmission was seen in daycare or siblings’ daycare. On two of the notifications, it was stated that the lacking childhood vaccination was due to conscious opt-out.