Since 1 October 2007, it has been a statutory obligation in cases of invasive pneumococcal disease to submit the pneumococcal isolate for serotyping to the Department of Bacteria, Parasites and Fungi, Statens Serum Institut. This obligation forms the basis for national level monitoring. Monitoring also includes the cases in which a cultivable isolate is not available. Since 2010, these cases have primarily been identified via the Danish Microbiology Database (the MiBa).

Invasive pneumococcal disease is primarily seen in very young children and among the elderly. Among small children, there is an excess representation of boys, but the gender distribution is more equal in other age groups. The incidence is similar for all parts of Denmark. Tables 1 and 2 present the distribution in 2017 and 2016 by sex, age and geography. 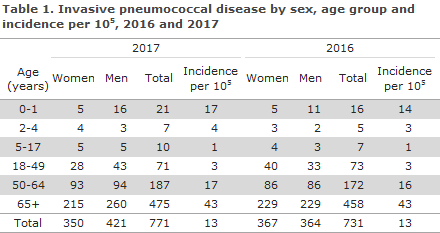 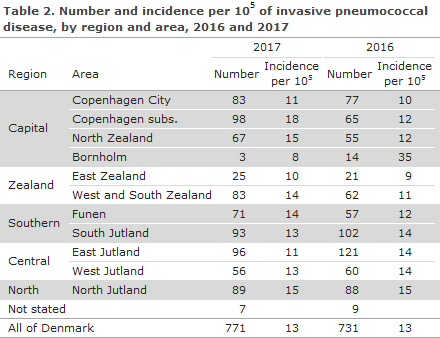 Invasive pneumococcal disease primarily occurs in the coldest months of the year. Figure 1 shows how the IPD cases recorded in 2016 and 2017 were distributed across the year.

Following the introduction of pneumococcal vaccines into the Danish childhood vaccination programme in 2007, the incidence of invasive pneumococcal disease among young children has declined dramatically. Furthermore, the vaccines have had an effect among non-vaccinated age groups owed to the so-called herd effect. This is particularly clear in the age group with the highest incidence, viz. the elderly. Figure 2 shows the incidence for seven age groups in the 2000-2017 period. 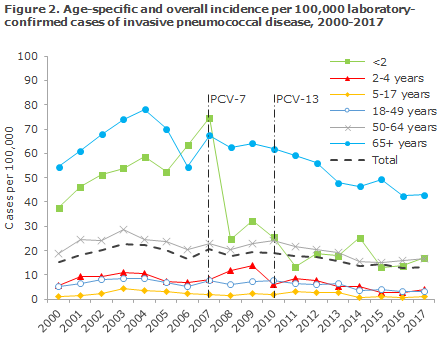 The PCV-7 vaccine protects against serotypes 4, 6B, 9V, 14, 18C, 19F and 23F. Additionally, the PCV-13 vaccine covers serotypes 1, 3, 5, 6A, 7F and 19A. Following the introduction of the vaccines, the occurrence of PCV-included serotypes has been reduced markedly for the entire population.

In recent years, serotype 8 has been particularly prevalent, and in 2017 a total of 195 cases of IPD caused by serotype 8 were detected, corresponding to 25.3% of the total number of cases.

Furthermore, serotype 8 is the most dominant pneumococcal serotype for IPD in Europe. Figure 3 presents the number of cases with the corresponding most dominant serotypes in the 2000-2017 period. 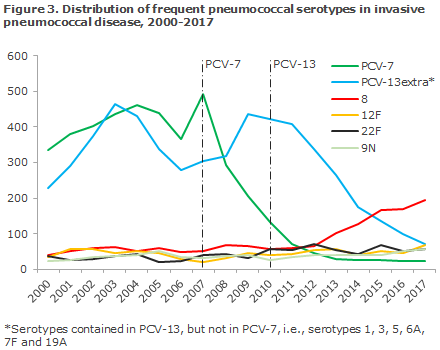 Antibiotic resistance of pneumococcal isolates from invasive pneumococcal disease is reported annually to DANMAP. In 2017, 94.4% of all isolates were susceptible to penicillin as well as erythromycin.

We would like to take this opportunity to thank all Danish departments of clinical microbiology for their contribution to the national monitoring efforts and for a fruitful collaboration.