The 2020/2021 influenza season was completely unusual. In fact, it never started. The persistent fight against COVID-19 as from the spring of 2020, including hygiene measures, restrictions, limits on public gatherings, etc. in the Danish society meant that the usual increase in influenza and other respiratory infections during winter was essentially absent. The same phenomenon was observed in other European countries and in the Southern Hemisphere during their winter season. Additionally, highly limited travel activity has reduced the spread of influenza.

Among the detected influenza cases, approximately equal shares were seen of influenza A and B. The number of positive samples sent for typing was so low that no general conclusions about the subtype in circulation can be drawn.

A total of 1,339,014 influenza vaccines were registered as having been administered in the 2020/21 season. Hereof, 879,168 vaccines were given to elderly people aged 65 years or more, resulting in a record-high 75% vaccination coverage in this group. The coverage was markedly higher than in the previous ten years when the coverage only reached approx. 50%. Thus, for the first time ever, Denmark has met the WHO’s objective that at least 75% of the population aged 65 years or more is vaccinated against influenza ahead of each new season.

In contrast to the few observed cases in humans in the 2020/21 season, an unusually high occurrence of avian influenza was seen in Danish birds. Thus, highly pathogenic influenza H5N8 was detected in 337 wild birds and in 15 bird keeps. Similarly, various other North and East European countries were heavily affected by avian influenza in this season.

From Week 40 in 2020 to Week 20 in 2021, the occurrence of influenza-like illness (ILI) was reported to the sentinel surveillance system by an average of 80 GPs weekly. It should be mentioned that, due to COVID-19, the sentinel surveillance was maintained throughout the summer half-year of 2020, from week 20 to week 40, when influenza surveillance is normally inactive. In the spring of 2020, the sentinel surveillance system had been adjusted and extended to comprise patients with COVID-19 symptoms which are generally broader than influenza symptoms and do not present acutely as influenza symptoms typically do. Concurrently, phone consultations were introduced, and patients were laboratory tested by swabs from the nasal cavity, sampled in the patient’s home by the patients themselves. The ILI curves therefore do not represent patients with influenza only but represent a broader group, including COVID-19 patients.

The ILI occurrence was also followed daily via the nationwide surveillance performed by emergency call service physicians and also via the 1813 Helpline in the Capital Region of Denmark.

ILI in the population was also monitored through Influmeter; a web-based monitoring system in which anyone residing in Denmark can report influenza-like symptoms independently of any healthcare contact. In connection with the COVID-19 pandemic, an opportunity was provided allowing respondents to self-report if their symptoms had probably been caused by COVID-19.

The proportion of patients who contacted their GP for ILI is presented in Figure 1. In the autumn, as from Week 40 and until the turn of year, the level of ILI activity was lower than expected but then decreased further to a very low level, which was sustained for the rest of the season. ILI activity reflects the occurrence of COVID-19, and the curve reflects the relatively extensive COVID-19 transmission that occurred in Denmark in November-December, which largely became under control from January onwards thanks to the intensified restrictions and lock-downs imposed on the Danish society. 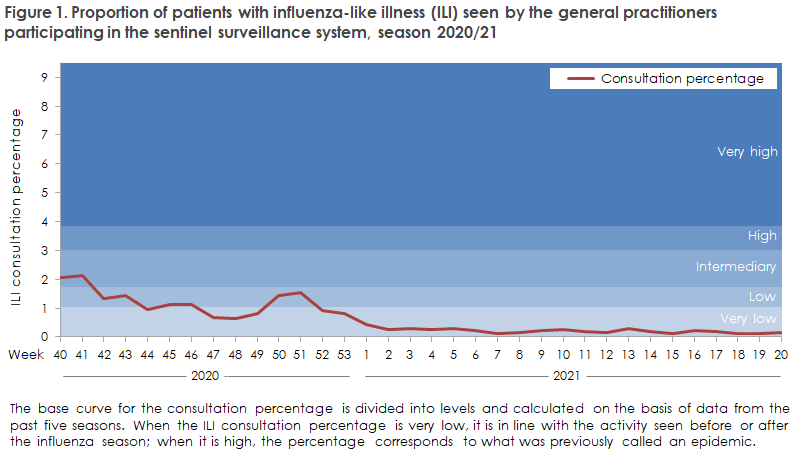 Note for the figure: As from Week 12, 2020 onwards, the ILI surveillance reflects the combined surveillance of influenza and COVID-19.

In the surveillance of the emergency call service physicians, the consultation percentage recorded in the entire 2020/21 season was also extremely low compared with previous seasons, Figure 3.

Among Influmeter participants, approx. 8,000 persons reported their symptoms weekly from October 2020 to May 2021. In all, 2,040 cases of ILI were recorded among the approx. 15,000 participants. Throughout the season, the proportion of participants with ILI remained low (between 1% and 2%), Figure 4. 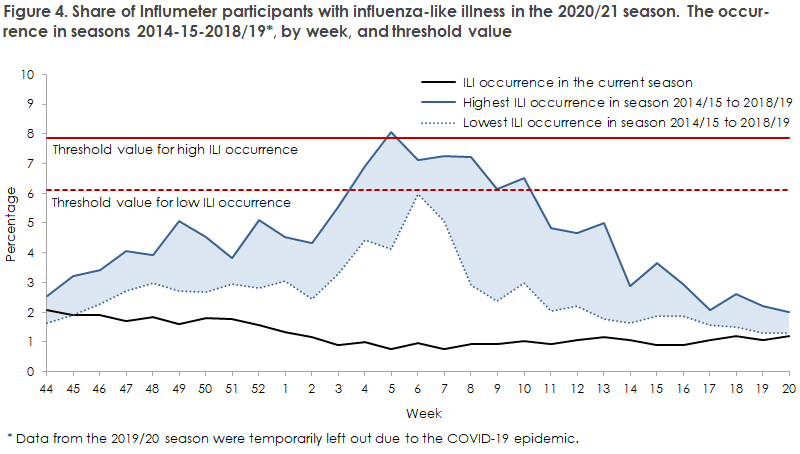 During the 2020/021 season, the proportion of participants who themselves believed that their symptoms were due to COVID-19 varied from 1% to 4%, Figure 5. The most frequent symptoms among persons who assumed that they had COVID-19 were cough, headache, and muscle and joint pains.

Laboratory diagnostics based on the MiBa

MiBa data extraction showed that a total of 69,913 patients were tested for influenza from Week 40 in 2020 to Week 20 in 2021. In all, 46 hereof tested positive to influenza (0.07% of those tested); 19 had influenza A and 27 had influenza B, Figure 6. For comparison, the 2019/20 season recorded 7,575 positives among 68,530 tested samples (11%). The extraordinarily low number of detected influenza virus cases demonstrates that this influenza season essentially never happened. The low occurrence cannot be explained by less influenza testing than normally. In fact, more people were tested than in the previous season.

The number of detected influenza samples in 2020/21 compared with the five previous seasons is presented in Figure 7.

During the 2020/21 season, the National Danish WHO Influenza Centre at the SSI received samples from a total of 279 patients for testing and characterisation of influenza virus, including 121 samples submitted by sentinel physicians. The remaining samples were submitted as diagnostic samples or by other laboratories, of which 11 originated from departments of clinical microbiology. It was possible to confirm influenza A only in a single sample. This sample contained a special virus variant of the N1H1v subtype that was more closely related to virus circulating in pigs than humans.

No further cases were detected of the special virus variant in relation to the finding, which is therefore considered an isolated case. Also see this news article (in Danish). 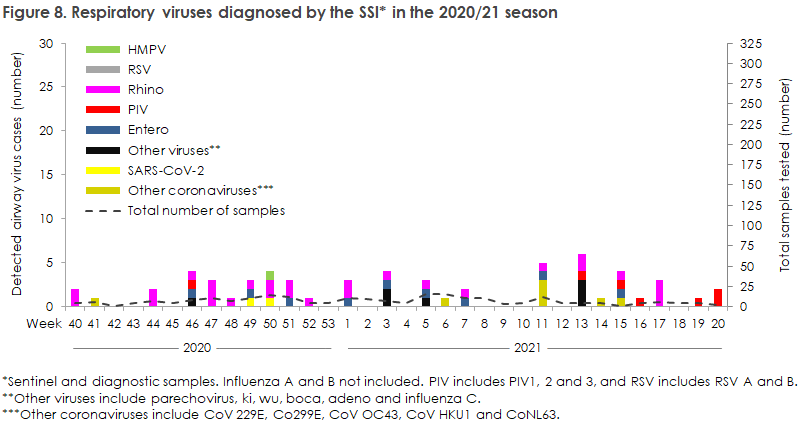 The National Influenza Centre for the WHO at the SSI carries the national responsibility for testing and monitoring of influenza virus from patients who initiate antiviral treatment for antiviral resistance. Normally, influenza virus is tested from samples submitted for diagnostics and monitoring of the occurrence of antiviral resistance mutations. The mutations may develop in virus to the antiviral agents used in the treatment and prevention of influenza infection. This primarily applies to the neuraminidase inhibitors Tamiflu and Relenza. Additionally, tests may be done to establish any resistance to the polymerase A-inhibitor Baloxavir. The presently circulating influenza viruses are all naturally resistant to the ion channel inhibitors Amantadine and Rimantadine.

The general excess mortality in the population was calculated weekly. After Week 26, 2021, an overall analysis of the winter season will be prepared as usual. Given the absence of influenza and other common respiratory infections, this analysis will, however, predominantly reflect mortality related to COVID-19. The SSI has published a new sub page to SSI.dk that provides a detailed description and analyses the mortality in the Danish population on a week-by-week basis.

Seasonal influenza vaccination was offered free of charge to persons with an increased risk of running a serious influenza course in the period from 1 October 2020 through 15 January 2021 and to pregnant women in their second and third trimesters and persons with immune deficiency and their contacts until 1 March 2021, EPI-NEWS 44/20. Furthermore, for the first time ever, vaccination was offered free of charge to public healthcare and nursing staff. In the 2020/21 season, 4-valent inactivated influenza vaccines that protect against two types of influenza A and two types of influenza B were used in most risk groups. The oldest citizens aged 85 years or more were offered a high-dose vaccine for the first time ever.

A total of 1,339,014 influenza vaccines were registered as having been administered in 2020/21. Hereof, 879,168 vaccines were given to elderly people aged 65 years or more, corresponding to a 75% vaccination coverage in this group. This is much higher than in the previous years when the vaccination coverage in this group was around 50%. This may in part be due to enhanced awareness in the group of the risk of serious illness due to influenza or in case of double infection with influenza and COVID-19. Furthermore, for the first time, all citizens aged 65 years or more received an influenza vaccination reminder either in their e-Boks or by letter from the SSI. It should be mentioned that administrative changes have been introduced in the service codes used for risk groups in the 2019 season, and therefore it is difficult to directly compare with previous seasons the vaccination coverage of persons aged less than 65 years with chronic disease and early retirement pensioners.

Influenza vaccine effectiveness (VE) is normally calculated at the mid-point of the season and once the season has concluded. Because of the very low number of influenza cases, however, it has not been possible to calculate VE for the 2020/21 season.

The WHO recommends that 4-valent influenza vaccines for the next influenza season in 2021/22 comprise the following virus components:

When using 3-valent vaccines, the recommendation is to use B/Washington/02/2019 (B/Victoria line)-like virus for the influenza B virus part.

The national Danish reference laboratory for avian influenza at the SSI and the University of Copenhagen are responsible for testing samples from bird flocks and wild birds on suspicion of avian influenza and for characterising any detected influenza viruses.

Since the autumn of 2020, a highly pathogenic avian influenza (HPAI) has caused disease and increased mortality among wild birds and bird keeps in Denmark and in various other countries. The outbreak was prolonged, but the Danish Veterinary and Food Administration assessed in a threat assessment published on 24 May 2021 that the overall risk of transmission of highly pathogenic avian influenza to Danish bird keeps may be lowered from High to Low. Sporadic findings in wild birds are still to be expected.

Since the outbreak started, highly pathogenic avian influenza has been detected in 337 wild birds that have been found dead in nature. Primarily clade 2.3.4.4b H5N8 avian influenza was detected, but a limited number of cases were detected of related viruses of subtypes H5N5, H5N3 and H5N1. 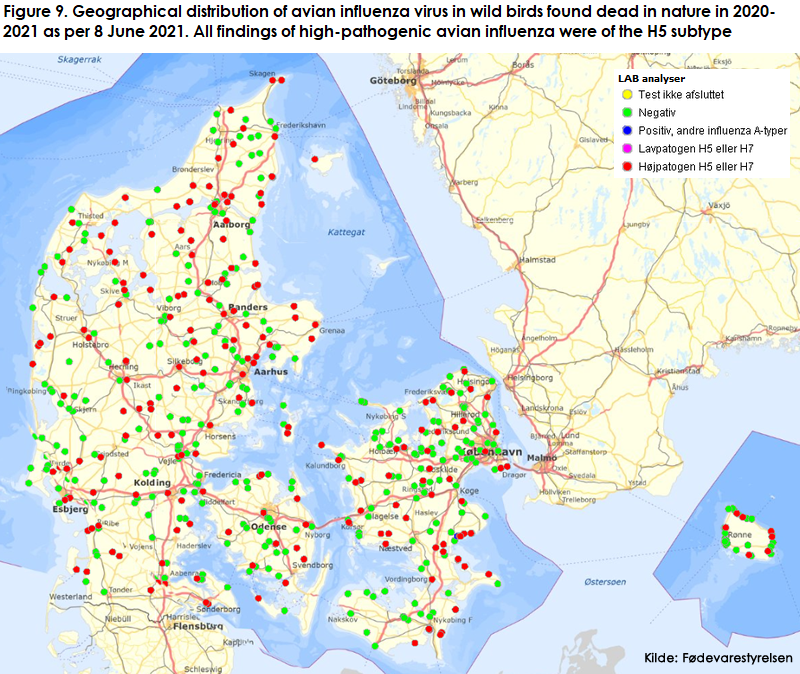 In the same period, avian influenza caused outbreaks with HPAI H5 in large commercial bird flocks, leisure time keeps and other captive birds. A total of 15 flocks in Jutland and on Zealand, Langeland and Bornholm were affected. In 14 of these flocks, virus of the subtype H5N8 were detected, whereas one was affected by H5N5. In all cases, the viruses detected were closely related to viruses detected in dead wild birds.

Avian influenza in humans in Russia

In February 2021, the World Health Organization (WHO) reported that several human cases of avian influenza H5N8 had been detected in Russia. Thus, in connection with an H5N8 outbreak in a large bird flock, H5N8 virus was detected in seven workers, all of whom were involved in the culling and handling of dead, diseased birds. The seven persons had none or only mild symptoms even though they are believed to have been exposed to large amounts of virus. Subsequently, person-to-person transmission was not detected, and the WHO assessed that the infection risk for humans was low.