The influenza season - report on disease occurrence in 2018/19

The influenza season - report on disease occurrence in 2018/19

The 2018/19 influenza season was dominated by influenza A (H1N1)pdm09. However, towards the end of the season influenza A (H3N2) comprised the greatest proportion of detected cases. Very few influenza B cases were observed. Even though both the number of individuals in whom influenza was detected and the number of individuals who themselves reported influenza-like symptoms via Influmeter in one week exceeded previously measured figures, the influenza activity recorded was at a mid-level in general compared with previous seasons. More vaccinations were given to all risk groups than in the previous season. The vaccination overage among elderly people aged 65 years and above increased from 50% in 2017/18 to 52% in 2018/19. The season’s influenza vaccines protected well against influenza A (H1N1)pdm09 virus, but not against influenza A (H3N2) towards the end of the season.The overall effectiveness for the season’s influenza vaccines was moderate.

From Week 40 in 2018 to Week 20 in 2019, the occurrence of influenza-like illness (ILI) was reported to the sentinel surveillance by an average of 130 general practitioners (GPs) weekly, compared with 90 in the previous season. The ILI occurrence was also followed daily via the nationwide surveillance performed by emergency call service physicians and also via the 1813 Helpline in the Capital Region of Denmark.

ILI in the population was monitored through Influmeter; a web-based monitoring system in which anyone residing in Denmark can voluntarily report influenza-like symptoms, independently of any healthcare contact.

Influenza-related admissions were monitored through weekly data capture from existing registers. Patients who had influenza detected were identified in the MiBa; information about hospital admissions, intensive therapy and underlying diseases was retrieved from the national Patient Registry, and information about deaths among admitted patients from the Danish Civil Registration Register (the CPR Register). However, due to changes in the data structure of the National Patient Registry, it was not possible to calculate the total number of influenza-related admissions in this season, and data were only available up to and including Week 5, 2019.

Information about the number of people receiving influenza vaccination was collected from the Danish Vaccination Register (DDV) and information from MiBa and the National Influenza Centre was used for calculation of vaccine effectiveness.

The share of patients who contacted their GP with ILI was increased as from week 4, 2019, and remained elevated until Week 8, 2019, Figure 1. In Week 5, 2019, the activity in general practice reached the mid-level, but then returned to a low level in Week 8. 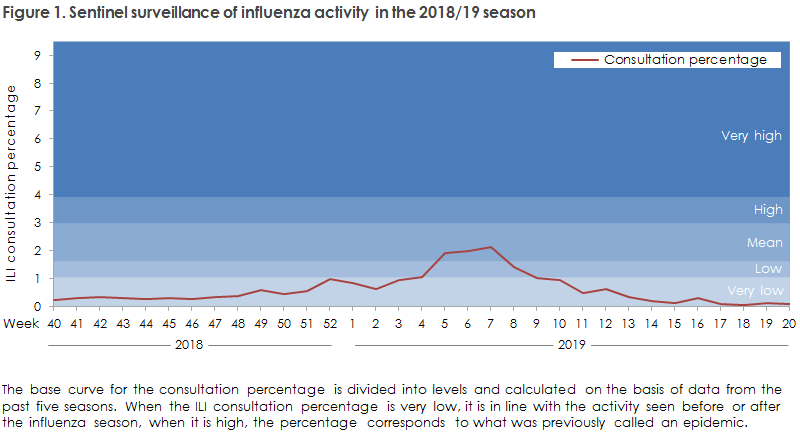 The influenza activity recorded by the sentinel surveillance initiative was lover than that observed in the previous (2017/18) season, which was a prolonged and tough season; however, the influenza activity was in line with the 2016/17 season, which was almost completely dominated by influenza A (H3N2), Figure 2. The consultation percentage recorded by the emergency call service physicians was in line with the preceding seasons, Figure 3. 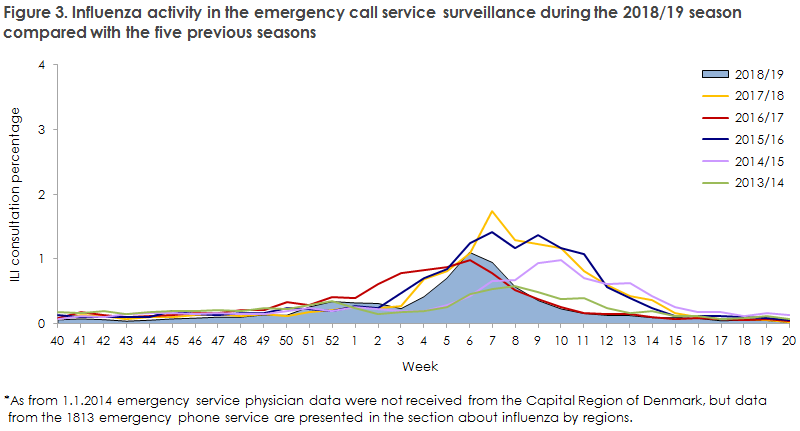 In the course of the season, the National Danish WHO Influenza Centre at the SSI received a total of 5,686 influenza samples for testing and characterisation of influenza virus, including 776 samples submitted by the sentinel physicians, 121 diagnostic samples submitted by GPs and other laboratories, and 4,789 surveillance samples diagnosed and submitted by the departments of clinical microbiology. The distribution of patients by identified virus strains is presented in Table 1. A total of 55% of the submitted samples were sub-typed in the course of the season (sub-typing was performed for all submitted sentinel and diagnostic samples; however, surveillance samples were only spot checked). Among the typed samples, 99.7% were influenza A virus and 0.3% were influenza B virus. In the influenza A virus group, the H1N1pdm09 comprised 60% and the H3N2 subtype 40%. The subtype H1N1pdm09 dominated during most of the season, whereas H3N2 recorded the largest share of subtyped samples in the final weeks of the season, Figure 7.

The SSI performed PCR-based testing of 897 airway samples for more than 20 known airway viruses. A total of 558 samples tested positive of which 367 (66%) were positive for influenza and 191 (34%) were positive for other airway viruses. Rhinovirus (11%) and corona virus (8%) were the second-most frequently occurring group of viruses, followed by respiratory syncytial virus (6%), parainfluenza virus (4%), human metapneumovirus (3%), adenovirus (1%) and enterovirus (0.4%), Figure 8. 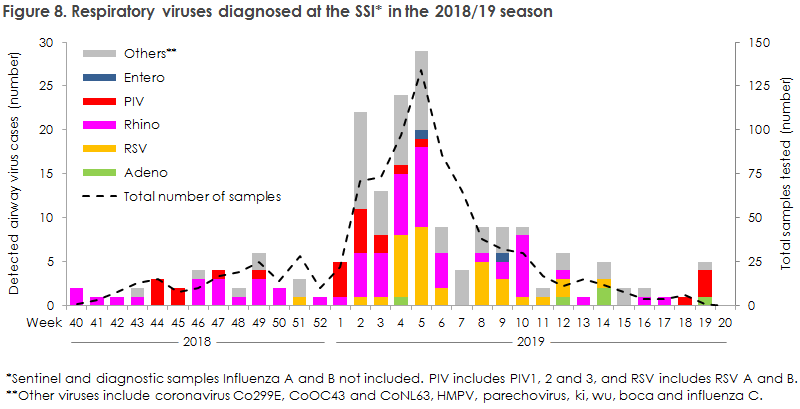 The National Influenza Centre for the WHO at the SSI carries the national responsibility for testing influenza samples from patients who initiate antiviral treatment for antiviral resistance. In all, 113 samples were received from 58 patients in the 2018/19 season, and the analyses are still ongoing. Additionally, in the 2018/19 season, a total of 305 randomly selected surveillance samples were tested for resistance to the neuroaminidase inhibitors oseltamivir (Tamiflu®) and zanamivir (Relenza). Mutations producing resistance to Tamiflu were detected in one sample. However, as only a single finding was made, there is no indication of circulation of antivirally resistant influenza viruses in Denmark. The presently circulating influenza viruses are all naturally resistant to the ion channel inhibitors Amantadine and Rimantadine.

Due to changes in the data structure of the National Patient Registry, it was not possible to calculate the total number of influenza-related admissions in this season. Data were therefore only analysed up to and including Week 5, 2019.

From week 40 in 2018 through week 5 in 2019, a total of 1,692 patients with laboratory-confirmed influenza were admitted to hospital according to the National Patient Register, Figure 9. A total of 1,675 had influenza A (99%) and 17 had influenza B (1%). The median age was 57 years. In all, 84% had underlying risk factors for a serious influenza course. A total of 113 (7%) received intensive care. The most frequently reported risk factors in admitted patients were chronic pulmonary disease/asthma (909 patients, 54%), age ≥65 years (648 patients, 38%) and cardiovascular disease (563 patients, 33%). For 272 patients (16%), there were no information on risk factors. None of the admitted patients were recorded as having died within 30 days after their latest positive influenza test.

The majority of the admitted patients (72%) were not registered as having received influenza vaccination.

In the course of the 2018/19 influenza season, a significantly increased influenza-related mortality was recorded in the population from Week 5 to Week 7, 2019. The total estimated excess mortality related to influenza for the entire 2018/19 season was 790 deaths, Table 2. That is a somewhat lower figure than in the previous season (2017/18), which was the season with the highest overall influenza-related mortality in any season since 2010/11, when monitoring of excess mortality was initiated. 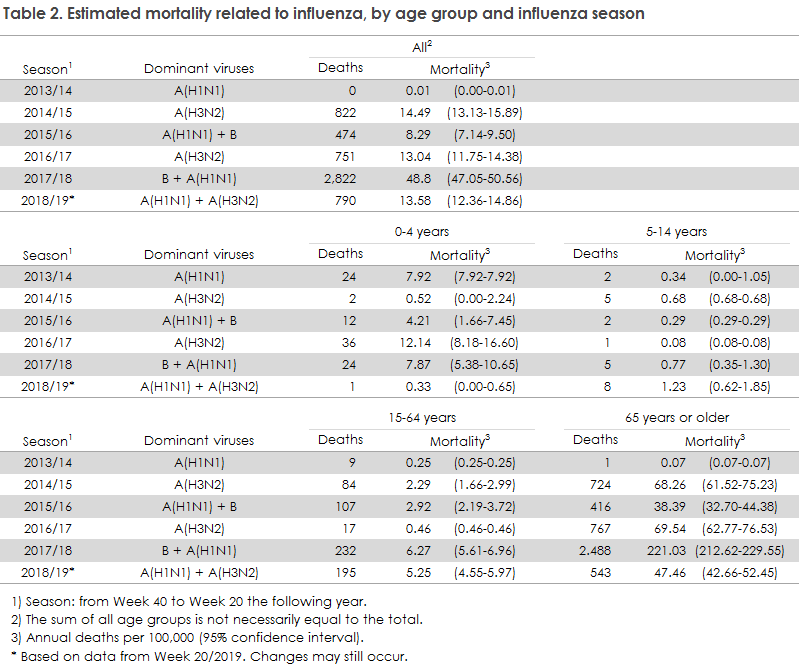 Seasonal influenza vaccination was offered free of charge to specific groups from 1 October 2018 through 31 December 2018 and also to pregnant women in their second and third trimesters and to persons with immunodeficiency and their contacts until 1 March 2019, EPI-NEWS 39/18.

According to information from the DDV, a total of 762,500 risk-group citizens were vaccinated, including 588,000 citizens aged 65 years or more (including citizens who received free vaccination, e.g. at their workplace), 131,400 chronically ill patients, 22,100 early retirement pensioners, 16,900 pregnant women and 4,000 household contacts to immunodeficient people. More vaccinations were given to all risk groups than in the 2017/18 season. The vaccination overage among elderly people aged 65 years and above increased from 50% in 2017/18 to 52% in 2018/19. Nearly 83,400 vaccinations were recorded as having been given to persons below 65 years of age who do not belong to a risk group. This number is also slightly higher than in the previous season. Data on the number of influenza vaccinations given to risk group persons and the vaccination coverage among elderly persons above the age of 65 years distributed by area and municipality are available at www.ssi.dk/data.

By linking information about samples tested for influenza from the MiBa to vaccination data from the DDV and data on influenza type from the National Influenza Centre, the SSI calculated the influenza vaccine effectiveness (VE) in a test-negative case-control design.

The WHO's recommendation for next year's 4-valent seasonal vaccine is as follows:

When using 3-valent vaccines, the recommendation is to use B/Colorado/06/2017-like virus (the B/Victoria/2/87 line) for the influenza B virus part.