The 2017/18 influenza season was unusual in terms of prevalence, duration and types of influenza virus in circulation. The season was prolonged and characterised by a very high level of influenza activity. The high level of activity was reflected in a high number of patients admitted to hospital with influenza and a substantial excess mortality among both adults and elderly people. The dominant virus was influenza B of the Yamagata line. It is rare for influenza B to be dominant, and this type is also not normally associated with serious disease that requires hospitalisation or with excess mortality among elderly people. In the final part of the season there was also a considerable number of influenza A cases.

From Week 40, 2017 to Week 20, 2018, the occurrence of influenza-like illness (ILI) was reported to the sentinel surveillance by an average of 90 GPs weekly, compared with 101 in the previous season. The ILI occurrence was also followed daily via the nationwide surveillance performed by emergency call service physicians and also via the 1813 Helpline in the Capital Region of Denmark.

ILI in the population was monitored through Influmeter; a web-based monitoring system in which anyone residing in Denmark can report influenza-like symptoms independently of any healthcare contact. More information about Influmeter.

Influenza-like admissions are monitored through weekly data capture from existing registers. Patients diagnosed with influenza are identified in the MiBa, and information on admission to hospital, intensive care therapy and underlying condition is collected from the National Patient Register. Furthermore, vaccination information is collected from the Danish Vaccination Register and information on fatalities from the Danish Civil Registration Register (the CPR Register). Corresponding information is used for the calculation of vaccine effectiveness. Mortality in the population in general is assessed through weekly collection of information on deaths from the CPR Register.

The share of patients who contacted their GP for ILI was increased from week 52, 2017, and continued to be so up until Week 14, 2018. In Week 5, 2018, the activity in general practice reached the intermediate level, and by Week 7 activity was at a very high level with a consultation percentage of 4.3. The activity remained high in Week 8, but then receded to intermediate and low levels in the following weeks. It is known that the consultation percentage in general practice increases artificially in the weeks of the winter holidays, as GPs have fewer planned consultations in these weeks. 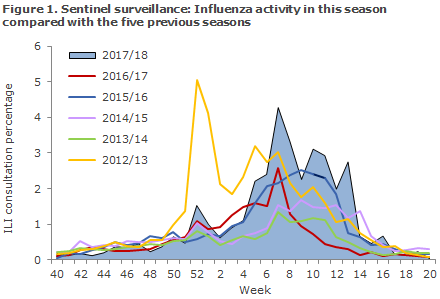 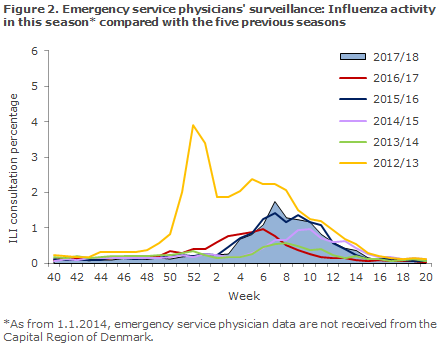 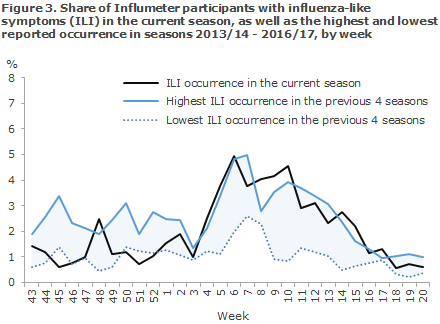 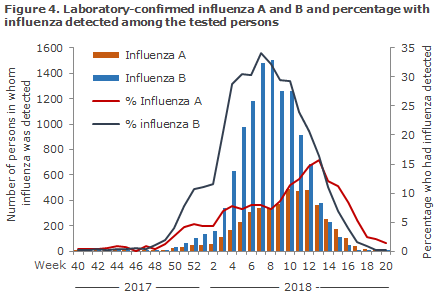 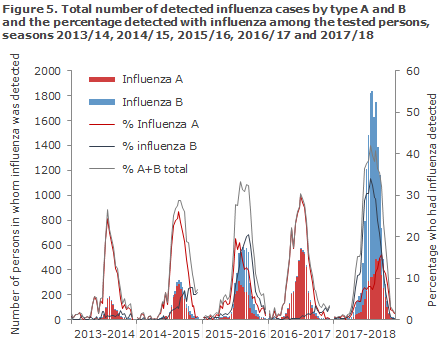 In the course of the season, the National Danish WHO Influenza Centre at the SSI tested samples from a total of 5,940 patients, including 471 patient samples submitted by the sentinel physicians, 173 diagnostic patient samples submitted for diagnostics by GPs and other laboratories, and surveillance samples from 5,296 patients submitted by departments of clinical microbiology. Among these, 5,516 (93%) patients tested positive to influenza virus of type A or B. The distribution of patients by identified virus strains is presented in Table 1 (10% of the 5,516 detected influenza viruses were not sub-typed). A total of 68% of the influenza-positive patients had influenza B, 17% had influenza A(H3N2) and 14% had influenza A (H1N1)pdm09. 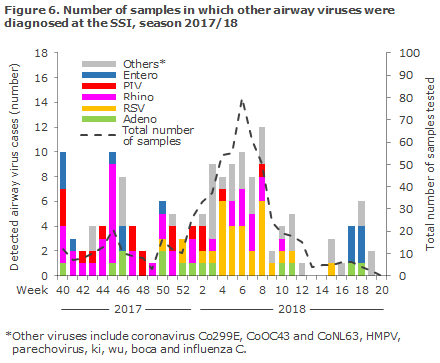 The national responsibility for testing influenza samples for antiviral resistance among patients who initiate antiviral treatment lies with the National Danish WHO Influenza Centre located at the SSI.

In all, 71 samples were received from 24 patients in the 2017/18 season, and analyses are still ongoing. Additionally, in the 2017/18 season, a total of 216 randomly selected samples were tested for resistance to the neuroaminidase inhibitors oseltamivir (Tamiflu®) and zanamivir (Relenza); no samples were resistant to both of these antiviral agents. The presently circulating influenza viruses are all naturally resistant to the ion channel inhibitors Amantadine and Rimantadine.

From week 40, 2017 through week 20, 2018, a total of 7,667 patients with laboratory-confirmed influenza were admitted to hospital according to the National Patient Register, Figure 7. This is the highest number recorded since 2010/11, which is the period for which we have data on laboratory-verified influenza admissions to hospital. A total of 2,399 had influenza A (31%), 5,306 had influenza B (69%) and 37 patients had a double infection. One patient had influenza C. The median admission age was 69 years for all admitted influenza patients, but considerable variation was present as patients admitted with influenza A(H1N1), A(H3N2) and influenza B had a median age of 52, 74 and 70 years, respectively. In all, 95% had underlying risk factors for a serious influenza course. The most frequently reported risk factors were chronic pulmonary disease/asthma (5,630 patients, 73%) age ≥65 years (4,451 patients, 58%) and cardiovascular disease (3,589 patients, 47%). For 412 patients (5%), information on risk factors was not available. A total of 603 (7.9%) patients died within 30 days after the latest positive influenza test. This share is in line with the one recorded in previous years. Even so, the majority of the admitted patients (4,835, 63%) were not registered as having received influenza vaccination.

A total of 549 (7%) of the hospitalised patients received intensive care, which is the same share as in the previous season and lower than in the 2015/16 season, which was the latest season to record many influenza B cases, Figure 8. Of the 549 patients, 199 (36%) had influenza A detected and 351 had influenza B detected (64%). Of these, 48% were women and 52% men. The median age was 68 years. A total of 99% had underlying risk factors for a serious influenza course. The most frequently occurring risk factors among the admitted patients was chronic pulmonary disease/asthma (489 patients, 89%), cardiovascular disease (340 patients, 62%) and age ≥65 years (335 patients, 61%). For 6 patients (1%), information on risk factors was not available. A total of 167 (30%) patients died within 30 days after the latest positive influenza test. 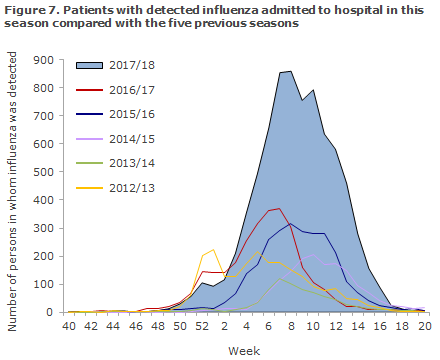 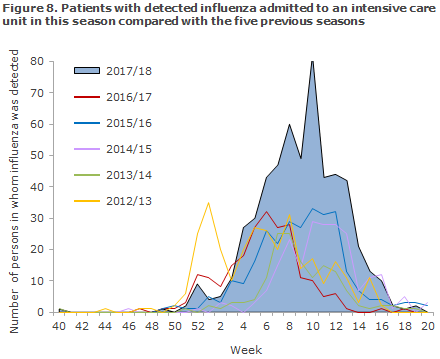 Citizens may die from influenza without ever coming into contact with Danish healthcare to have their influenza detected. This may, e.g., occur among nursing home residents. Therefore, the SSI estimates excess mortality in the general population using statistical models that are based on historical data (excess mortality = observed mortality minus expected mortality). Additionally, by comparing excess mortality with information about influenza activity, it can be assessed how big a part of the excess mortality may be attributed to influenza. 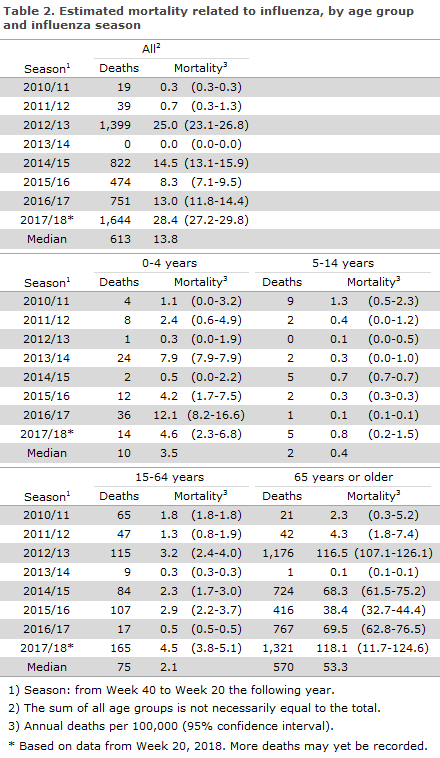 Seasonal influenza vaccination was offered free of charge to specific groups from 1 October through 31 December 2017 and also to pregnant women in their second and third trimesters and to persons with immunodeficiency and their contacts until 1 March 2018, EPI-NEWS 38/17.

According to information from the Danish Vaccination Register (DVR), a total of 702,300 risk-group citizens were vaccinated, including 554,200 citizens aged 65 years or more (including citizens who received vaccination at their workplace), 111,600 chronically ill persons, 20,000 early retirement pensioners, 13,400 pregnant women and 3,100 household contacts to immunodeficient people.

The Danish 2017/18 influenza season was tough, and many citizens were affected by influenza, particularly influenza B. The consequence was more hospitalisations and more deaths than were recorded for previous influenza seasons. A similar image was reported for the remaining parts of Europe, as a prolonged season dominated by influenza B produced a high number of hospitalisations and an elevated mortality in many countries. Influenza B is normally described as a seasonal influenza virus that mainly affects school children and young adults and which is not known for any association with excess mortality among the elderly, in contrast to, e.g., influenza (H3N2). This may possibly be so because influenza B virus does not mutate quite as rapidly as influenza A, why immunity may increase with age. This season has therefore been unusual as many older persons were also affected by influenza B. Thus, the median age for people admitted to hospital with influenza was 70 years of age.

The vast majority (95%) of the patients who were hospitalised with influenza belonged to a risk group for serious influenza, i.e. had a chronic disease or were older than 65 years of age. This underlines the importance of preventing influenza in these groups through vaccination. Nevertheless, the majority of the admitted patients (63%) had not received influenza vaccination. Even though the trivalent vaccine has enjoyed a lower than expected effectiveness this year to both influenza A(H3N2) and influenza B, vaccination remains the best form of influenza prevention that we have.

According to the WHO, next year’s trivalent influenza vaccine will also not contain influenza B/Yamagata. This is so because the virus is not expected to circulate in the same manner during the next season as a considerable share of the population will be immune following the massive spreading of infection in the current season.

This season saw a record-high number of microbiologic samples tested for influenza, and the positive percentage was generally high. This is so because many have fallen ill, but part of the explanation may also be owed to the fact that several hospital departments have introduced so-called rapid tests or “point-of-care tests”. That means that access to influenza test results at Danish hospital departments is now more rapid and less complicated. This is a good thing as a diagnosis and, if needed, isolation, can be achieved more rapidly. Increased testing may have contributed to the fact that this year has recorded more hospitalisations following the detection of influenza than previous seasons. Nevertheless, this year also recorded more influenza patients receiving intensive therapy than in previous seasons, and this is a patient group that we already expect will be tested thoroughly.