The median age of patients notified in 2021 was 41 years for men (range 6-76 years) and 42 years for women (range 2-60 years). Among these 132 notified cases, 51 persons (39%) had previously been diagnosed with HIV abroad, including two persons born in Denmark. Three children below ten years of age who were diagnosed in 2021 had all been adopted from high-incidence HIV countries. None of the children had become infected in Denmark.

Box 1. The estimated number of HIV positives in Denmark, the undiagnosed share and the number of cases who were tested late as per 31 December 2021

Estimated number of persons who are living with HIV in Denmark: 6,800
Hereof MSM: 3,750

The number of persons who are living with HIV in Denmark and have been diagnosed with HIV: 6,300
Hereof MSM: 3,500

Among the 81 persons who were newly diagnosed with HIV, 47 (58%) were born in or had been adopted to Den-mark and 34 (42%) were born abroad, including one tourist and one person who stayed illegally in Denmark.

In 2021, a total of 18 women were diagnosed with HIV. All of these women were known and had previously been notified with HIV via the Notification System for Infectious Diseases (NSID).

Decline in the number of notified HIV cases

Since 2017, a steep decline has been observed in the number of notified HIV cases, Figure 1. The decline is particu-larly pronounced among persons who have become infected in Denmark and coincided with the introduction of PrEP (pre-exposure prophylaxis, HIV medication that is given prophylactically against HIV infection). Additionally, 2020-2021 probably saw fewer HIV tests due to the COVID-19 lock-down (for example, the Checkpoints of the Dan-ish Aids Foundation were closed in several periods in 2020-2021).

Among persons notified with newly diagnosed HIV, the described decline does not affect the infectious groups equally. The decline is more prominent among MSM, particularly in the 2017-2019-period when the decline rec-orded among HTX is less clear. Therefore, the decline is probably linked to PrEP. In the 2020-2021-period, a parallel decline is observed in the two groups. This decline may probably, at least in part, be ascribed to COVID-19-related circumstances.

Some measure of geographical variation is observed in the decline of notified MSM from 2020 to 2021, Table 2.

Among the 81 persons who were diagnosed with HIV for the first time in 2020, information was available for 71 (88%) about their CD4 count when they were diagnosed and/or about recent infection (negative test and/or acute HIV disease) or about AIDS at their diagnosis. For nine persons born abroad and one person born in Denmark, these information items could not be collected.

The CD4 count is a marker that indicates how the HIV virus affects the cellular immune response. For a long period of time, a CD4 count below 350 cells per µl blood has been indication for initiation of highly active antiretroviral therapy (HAART) in Denmark if the patient had not wanted to initiate such treatment earlier. In August 2015, the guidelines were changed so that everyone who is diagnosed with HIV is offered to start treatment immediately, re-gardless of the CD4 count at the time of diagnosis. CD4 counts below 350 and/or AIDS at the time of diagnosis are still used in this report as a marker for late testing. Conversely, the CD4 count at diagnosis may be very low if the patient is tested shortly after having become infected, and this may erroneously be recorded as late testing based on the CD4 count. When a person is notified with HIV to the national monitoring scheme at Statens Serum Institut, we therefore enquire specifically about information that may show that the person in question is, in fact, a newly infected person with a low CD4 count (symptoms of acute HICV, recent negative test, etc.).

In 2020, 40% of MSM were notified as having been tested late. In 2019, the corresponding figure was 51%. Thus, it appears that the recorded improvement continues. As previously mentioned, it needs to be taken into account that the testing activity may have been affected by the COVID-19 situation. Furthermore, it deserves mention that among the 14 late tested MSM, a total of eight cases were diagnosed with AIDS when they initially tested HIV posi-tive; three of these persons were identified so late that their lives could not be saved.

A total of 27 heterosexually infected persons had information about CD4 count. Among MSM, 21 (78%) were test-ed late. Eight of those who were tested late were concurrently diagnosed with AIDS. 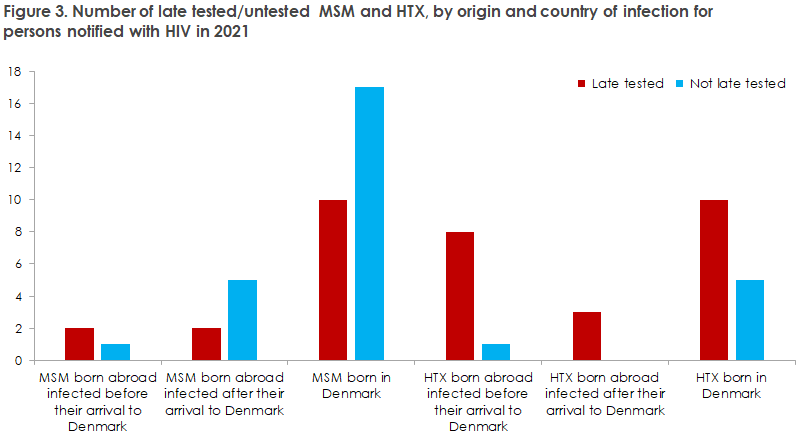 For six of the seven persons notified with IV drug use as the mode of infection, information was available about DC4 count. Four of these persons were tested late.

Among 13 persons whose data of immigration was known, for whom a CD4 count was available and who had been notified as having become infected before arriving to Denmark, 11 were tested late. Three of these patients had arrived in Denmark in 2021 and had therefore been tested late in relation to the timepoint at which they had become infected in their country of origin. In contrast, the remaining eight persons had stayed in Denmark for one to five years before being tested for HIV. The Danish Health Authority’s guideline published in 2013 states that HIV testing should be considered for persons from Africa, Asia, South America and Eastern Europe when they first come into contact with Danish healthcare, regardless of the reason for such contact. These eight persons (of whom two were also notified with AIDS at the same time) could have been identified and treated earlier if the rec-ommendations of the guideline had been observed.

In 2021, 16 of the 81 newly HIV-diagnosed persons (20%) were notified with AIDS as they were diagnosed with an AIDS-defining condition concurrently with their HIV diagnosis. Among these, seven were HTX, eight were MSM and one was an IV drug user. Additionally, 2021 saw four persons notified with AIDS who were previously known to have a HIV diagnosis, including one person who was known to have immigrated with HIV and who was not in treatment. The most frequently recorded AIDS-defining diagnosis was pneumocystis jirovecii-pneumonia.

A total of 33 HIV-notified persons died in 2021. Hereof, as mentioned above, three who had been diagnosed with both AIDS and HIV in 2021. The remaining 30 persons had been diagnosed between 1987 and 2020 and were 29-79 years old at their time of death. As information from the Causes of Death Registry are published with a minimum one-year delay, it is not possible within the current death year to assess which share of the deceased persons died from a HIV-related condition and who died due to other causes. Retrospectively, though, the experience is that approx. one in every four deaths among HIV-positives is related to HIV.

Checkpoint is the Danish AIDS Foundation's test sites for MSM and immigrants in Copenhagen, Aarhus, Aalborg, Frederiksberg and Odense. Here, you can be tested for HIV and syphilis, among others, without scheduling an ap-pointment, and you will receive the results immediately. A total of seven men tested HIV positive for the first time; four Danes and three immigrants; all were MSM.

This annual report is also described in EPI-NEWS no. 48/22.