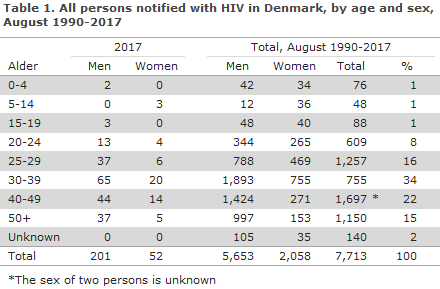 Among these cases, 71 (28%) had previously been diagnosed with HIV abroad, including seven Danish-born persons.

A total of 51 were men and 20 were women; 34 were homosexually infected (MSM), 21 heterosexually infected (HTX), three had become infected by intravenous drug use (PWID), two were mother-to-child transmissions, one was infected via unclean syringes in healthcare services abroad, and in 10 cases the route of infection was not stated. Of the 34 MSM with known HIV, 16 (47%) were from a Western country and 18 (53%) were from Southeast Asia, South America, the Middle East or Africa. Among the HTX, 14 of 21 (67%) were from Sub-Saharan Africa, the Middle East or Thailand, whereas seven (33%) were from Western countries.

Among all persons notified, 2017 recorded a continued increase in the share of those who had previously been diag-nosed, Figure 1. 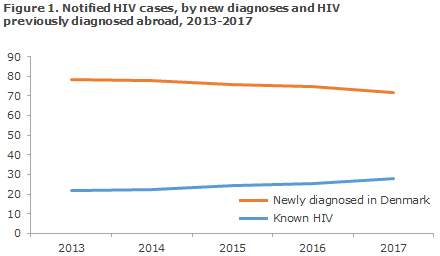 Box 1. The estimated number of HIV positives in Denmark, the undiagnosed share and the number of cases who were tested late as per 31 December 2017

Among the 33 women with newly diagnosed HIV, nine were detected as part of the general screening of pregnant women. Five were from Africa, two from Southeast Asia and two were from Denmark.

The other woman was tested in her 39th week for HIV due to symptoms. She tested HIV positive at this time after hav-ing tested HIV negative in the beginning of the pregnancy screening.

Among the 105 Danish-born persons who had HIV diagnosed for the first time in 2017, 62 were MSM, 39 HTX, one PWID, one MTCT and in two cases the mode of infection was not stated.

Among the MSM, 54 (87%) had become infected in Denmark and five in the US, Turkey, Indonesia, Peru and Israel, re-spectively. In three cases, the country of infection was unknown.

Among the 75 immigrants residing in Denmark, 32 (43%) stated that they had become infected in Denmark, 22 MSM and 9 HTX, and in one case the mode of infection was not stated. These 32 people were from 24 different countries of origin across large parts of the globe.

Among the remaining 43 immigrants, the country of infection was not provided in two cases, and the remaining 41 per-sons were from a total of 23 different countries of infection, mainly in Sub-Saharan Africa, Southeast Asia and Eastern Europe. A total of 24 (56%) were HTX, 12 (28%) MSM, three PWID and three MTCT. For one person, the mode of infec-tion was not stated.

Six of the 97 MSM (6%) were diagnosed at the initial tests made as they were applying for inclusion in PrEP projects (PrEP, pre- exposure prophylaxis, a preventive antiretroviral treatment for HIV-negative people). 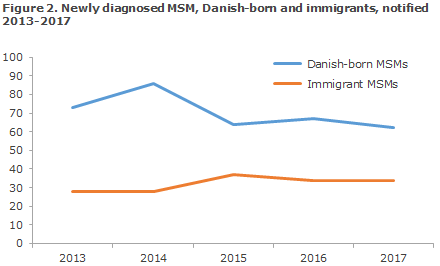 Table 2 shows the distribution by area and region. A total of 99 (54%) persons resided in the Capital Region of Denmark. 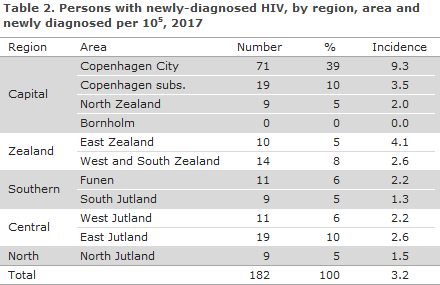 The median age was 37 years for men (range 1-73 years) and 35 years for women (range 5-70 years). Even though the age distribution among newly-diagnosed MSM has fluctuated somewhat in the past six years, Fig-ure 3, the entire period has seen a considerable share of notified people who were older than 40 years of age, and very few were younger than 20 years of age at the time of their diagnosis.

CD4 counts at the diagnosis

Among the 182 persons who were diagnosed with HIV for the first time in 2017, information was available for 174 (96%) about their CD4 count when they were diagnosed and/or about recent infection (negative test and/or acute HIV disease) or about AIDS at their diagnosis. In the remaining eight cases, CD4 counts were unavailable.

The CD4 count is a marker that indicates how the HIV virus affects the cellular immune response. For a long period of time, a CD4 count below 350 cells per µl blood has been indication for initiation of highly active antiretroviral therapy (HAART) in Denmark if the patient had not wanted to initiate such treatment earlier. In August 2015, the guidelines were changed so that everyone who is diagnosed with HIV is offered to start treatment immediately, regardless of the CD4 count at the time of diagnosis. CD4 counts below 350 and/or AIDS at the time of diagnosis are still used in this re-port as a marker for late testing.

Among the 174 persons for whom the CD4 count was stated, there were 78 (45%) whose CD4 count was below 350 cells per µl at their diagnosis, including 14 persons assessed as newly-infected based on primary HIV disease and/or a recent negative HIV test, whereas 96 (55%) had CD4 counts of 350 or above.

Among 182 newly HIV-diagnosed persons, a total of 25 (14%) were diagnosed with an AIDS-defining condition concur-rently with their HIV diagnosis, including 15 HTX, nine MSM and one PWID.

The interval from their HIV diagnosis to the AIDS diagnosis varied from 6 months to 19 years in the 12 AIDS-notified people with previously known HIV. The most frequent AIDS-defining diagnoses were: pneumocystis jirovecii pneumonia (13 cases), tuberculosis (four cases), and three cases of cerebral toxoplasmosis, HIV wasting, Burkitt lymphoma and can-dida of the oesophagus, respectively.

Checkpoint is the Danish AIDS Foundation's test sites for MSM and immigrants. Here, you can be tested for HIV and syphilis without scheduling an appointment and you will receive the results immediately. A total of 13 persons tested HIV positive; seven Danes and six immigrants, 12 were MSM, one man was HTX. Additionally, one man tested positive, but was later identified as a known HIV positive.

This report comprises all HIV patients who were included in the SERO project, where newly-diagnosed people’s HIV vi-rus is typed and tested for resistance, in the 2015-2017 period, for whom it was possible to sequence the POL gene in HIV 1. A total of 349 patients were included, whereof 207 had become infected in Denmark, 121 had become infected abroad, and in 21 cases the country of infec-tion was not known.

In 2017, the resistance mutations were found in all of the three primary antiretroviral (ARV) treatment groups that are used for highly active antiretroviral therapy (HAART): non-nucleoside inhibitors (NNRTI), nucleoside inhibitors (NRTI) and protease inhibitors (PI). Figure 4 presents the distribution of these resistance mutations by treatment groups for the past three years, detailing the shares of patients infected in Denmark and abroad. As numbers are small, fluctua-tions cannot be attributed statistical significance. 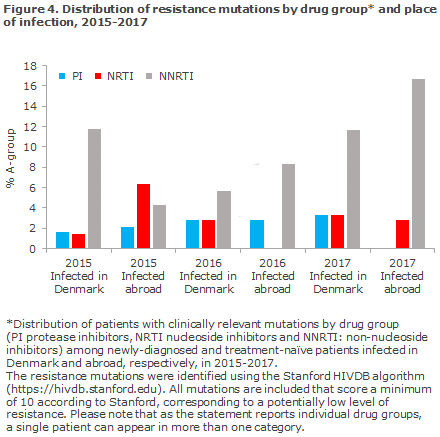 Pre-exposure prophylaxis (PrEP) is approved by the Danish Health Authority for use in persons who are at risk of becom-ing infected with HIV. PrEP (Truvada®) consists of the two nucleoside inhibitors emtricitabine (FTC) and tenofovir (TDF). Among the newly diagnosed patients tested in the Sero project, four had a potentially low to intermediary level of re-sistance against TDF, and one patient had a high level of resistance against FTC. Even so, none of the HIV 1 patients were resistant to both drugs. The low occurrence of resistance mutations, of which none will fully inhibit PrEP, is there-fore not expected to affect PrEP efficacy. 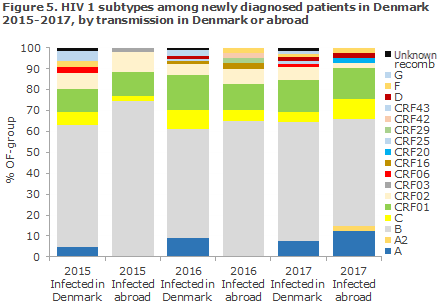 Among persons infected abroad, in 2017 subtype B comprised 51% of cases (21 persons), whereas CRF01, A and C oc-curred less frequently, even though four persons or more were affected by each of these subtypes. Thus, no marked difference was observed in 2017 between the subtype distribution of persons who had become infected in Denmark and abroad, respectively.

This annual report is described in EPI-NEWS 44/18.