In 2019, the Department of Infectious Disease Epidemiology and Prevention received 123 notifications of chronic hepatitis C. In 2020, the corresponding figure was 165 notifications.

2020 saw three notified cases (all men) of acute hepatitis C. Their median age was 43 years. Two were notified as having become infected in Denmark, including one with homosexual contact as the presumed mode of transmission (non-HIV infected) and one with intravenous drug use. The final case was notified with unknown mode and country of transmission as the case was established in a deceased person, and it remains unknown whether the case was in fact acute or chronic.

Table 2 presents an overview of presumed country of infection. 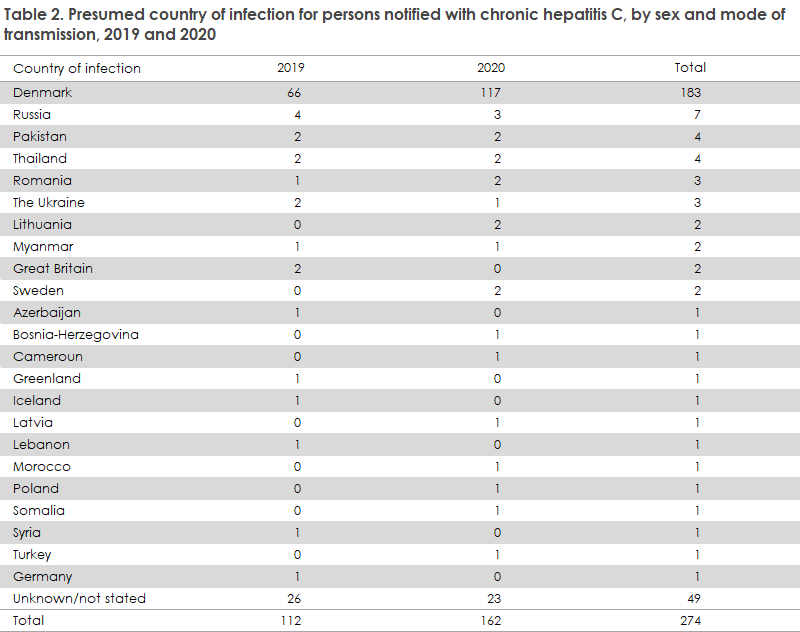 Over time, the share of notified cases who were presumably infected in Denmark has decreased from approx. 95% around 2000 to approx. 75% in 2020.

In the same period, the share of notified cases who were presumably infected in Eastern Europe has increased from approx. 1% around 2000 to approx. 7% around 2020. The share in the remaining regions has remained largely stable, Figure 3. The share of notifications with unknown or unstated country of infection has increased steadily from between 0% and 7% in the period leading up to 2009 to between 6% and 23% in the past five years.

Mode of transmission is presented in Table 3.

In 2019, no cases of mother-to-child transmission were notified, whereas 2020 saw a total of five (3%) cases. One of these cases had presumably become infected in Denmark by the mother who was a former drug user. This person was diagnosed at adult age. The other cases were also detected in adult persons born in other countries, primarily African countries.

Among persons who were presumably infected in Denmark, the share of notifications stating intravenous drug use as the mode of transmission decreased from 2000 to 2008, after which the share stabilised. Since 2010, the share has remained at approx. 80-85%, Figure 4.

This report is also described in EPI-NEWS 34/21.