In 2018, the Department of Infectious Disease Epidemiology and Prevention received eight notifications of cases of acute hepatitis C, whereof seven were men and one was a woman. The median age was 39.5 years (range 26-52 years). All were notified as having become infected in Denmark, five among men who have sex with men (MSM), two through IV drug use and one via heterosexual contact. Two of the cases were known HIV positives and two were receiving PrEP (Pre-Exposure Prophylaxis, HIV medication used preventively in HIV-negative risk groups). 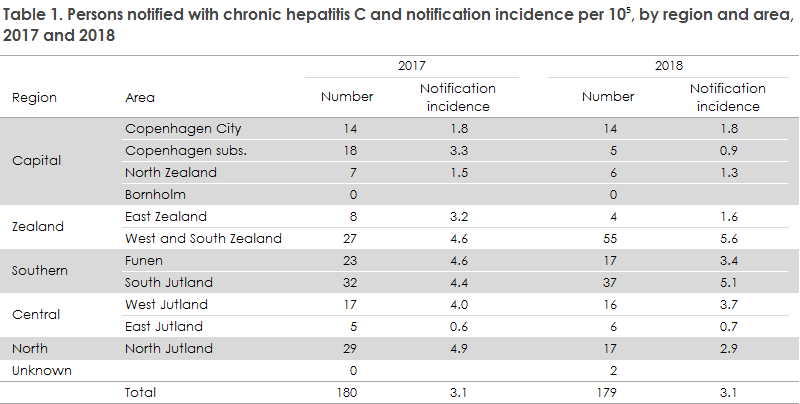 A total of 146 (82%) had acquired the infection in Denmark, whereas 23 (13%) had become infected in 18 other countries, and the country of infection was not stated for 10 (6%) of the cases. Mode of transmission is presented in Table 2.

Nine persons (5%) were notified as nosocomially infected cases in 2018. Among these persons, two were born in Denmark one of whom had become infected in Denmark (pre-1991 blood transfusion) and the other in Spain. The remaining seven persons had all become infected abroad, prior to their arrival to Denmark. The majority via blood transfusions or surgery performed in Eastern Europe or the Middle East, but one patient had probably become infected occupationally due to non-sterile surgery devices while working in the US many years ago.

Six persons were notified as having become infected heterosexually, including four in Denmark and two in Greenland. None of the six persons were known HIV positives, and no information was provided about IV drug use.

One child was notified as having become infected at birth in Denmark. The child was tested when the mother’s hepatitis C infection was detected by chance.