Hepatitis B, acute and chronic 2017

Hepatitis B, acute and chronic 2017

In 2017, the Department of Infectious Epidemiology and Prevention received six notifications of acute hepatitis B; four of the cases were men. The median age was 28.5 years (range 18-43 years). Four persons were of Danish origin and two were of non-Danish origin. All cases were infected in Denmark, except one person of Bulgarian origin who had presumably become infected in Bulgaria. 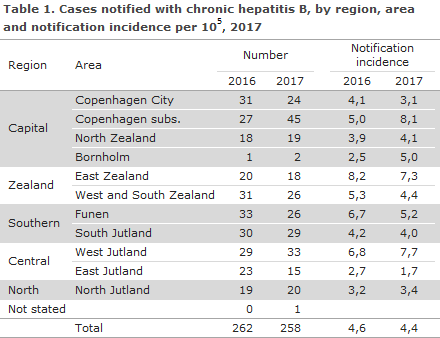 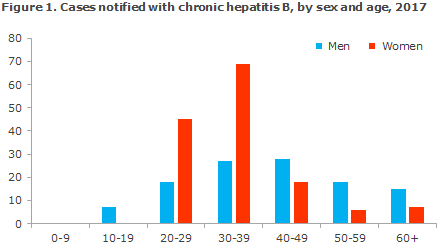 The majority, 242 (94%), were of non-Danish origin, including seven adoptees as well as ten second-generation immigrants of whom seven had become infected at birth in Denmark before the introduction of the general screening of pregnant women. Among the remaining three, no information was provided on mode of transmission, but all three had been born in Denmark by mothers from high-endemic areas, why mother-to-child infection is likely.

Sixteen (6%) persons were of Danish origin. For the Danish persons, the mode of transmission was notified as: heterosexual (7 persons), drug addiction (4 persons) and unknown (5 persons).

The notified persons of foreign origin were distributed on a total of 49 countries, including 66 persons (27%) from The Middle East.

Because of the general screening of pregnant women, women predominated among the notified cases of foreign origin, Figure 1.

Particularly women from South-East Asia and Eastern Europe were over-represented relative to men as they comprised 74% and 65%, respectively. In addition to the regions of origin presented in Figure 1, six of the notified persons were from Western Europe, five from the Indian subcontinent and three from Greenland. 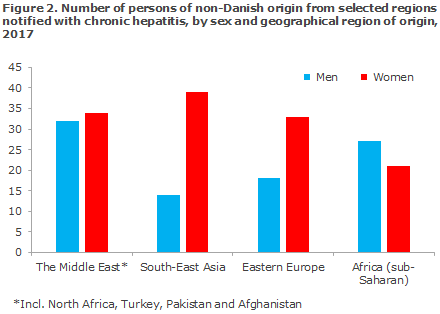 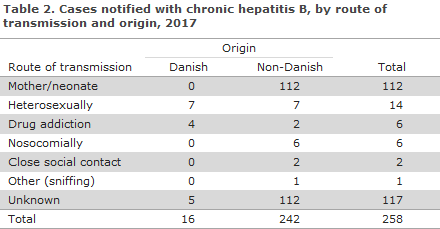 A total of 14 persons were infected heterosexually; two in Denmark and nine abroad. For three persons the country of infection was not stated. Two foreigners were notified as having become infected via close social contact in Syria and Uzbekistan, respectively.

Six persons were notified as having become infected via IV drug use; five in Denmark and one in Nepal.

Six were notified as nosocomial infection; three in Eastern Europe, one in Syria, one in Zimbawe and one in Greenland. All had become infected before their arrival to Denmark. For 117 persons, no source of infection was provided.