In 2018, a total of 3,206 cases of gonorrhoea were recorded in the Danish Microbiology Database (the MiBa). An additional 45 cases were notified to the Notification System for Infectious Diseases (NSID) only. Thus, a total of 3,251 cases were detected. The cases affected a total of 3,072 persons, as 2,915 had a single case detected, 139 persons had two cases, 15 persons had three cases, two persons four cases and one person five cases detected. A total of 2,015 (62%) of the cases occurred in men and 1,236 (38%) in women. This gender distribution was unchanged from the two previous years. The gender and age distribution of all recorded cases is shown in Table 1.

The most frequently occurring age group was 20-24-year-olds among both women and men (33% among women and 24% among men).

Additionally, ten children below 15 years of age were registered with sexually transmitted gonorrhoea. Five of these cases were notified with the NSID. Eight were 14 years old and two were 13 years old.

The SSI received gonococcal isolates from 1,067 unique cases of gonorrhoea, which had been detected by culture in 2018 in Danish DCMs. This is equivalent to 33% of all registered cases of gonorrhoea (42% in 2017). The received isolates were from patients whose distribution on sex and age group was in line with the distribution among all registered cases. Figures from the MiBa demonstrate that the Central Denmark Region has not recorded a decrease in their share of the total number of laboratory diagnoses of gonorrhoea (16% in 2017 and 14% in 2018). Even so, the share of isolates from patients in the Central Denmark Region was 10% in 2017 but only 6% in 2018.

This is probably because in March 2018, the Central Denmark Region stopped doing gonococci cultures as such samples were to be sent to the SSI. This probably occurred to a much lesser extent than initially assumed, and as transport time in many cases exceeded 24 hours despite the sampling scheme introduced, it is assumed that a considerable share of the negative cultures were false negatives.

Among the women, it was stated that 26 (3%) of the cases occurred in pregnant women. According to the notifications, four women and two men were sex workers.

Among the 161 cases (141 men and 20 women) acquired abroad, 33 had been acquired in Thailand: 23 were men who had become infected by women, eight were men infected by men, and one was a woman infected by a man. The final case was a man for whom the mode of infection was not stated. The remaining 128 cases were divided on 40 countries across the world.

Information about HIV status was available for 533 (97%) of the 550 men who were notified as having become infected by men. Among these, 109 (20%) were HIV positive including 107 who were already known to have HIV and two who were notified with newly diagnosed HIV. Among the 722 men who stated that they had been infected through heterosexual contact, 475 (66%) had been tested for HIV. This included one notified as known HIVpositive. Among 842 women, a total of 566 (67%) had been tested for HIV. Two women from Africa and Greenland, respectively, were known to have HIV; all of the remaining were HIV negative.

The isolates were tested for ceftriaxone, azithromycin and ciprofloxacin susceptibility by determination of MIC (minimum inhibitory concentration, mg/l) and for formation of penicillinase, which indicates a high resistance to penicillin.

At several locations across the world, ceftriaxone resistance has been detected among gonococci, and treatment failure has also been observed with this drug. In 2017, a Danish case of urethral gonorrhoea was reported in a man whose isolate revealed both borderline resistance to ceftriaxone and reduced susceptibility to azithromycin, i.e. the two drugs that form part of the recommended combination treatment.

The described case is mentioned in EPI-NEWS 18/17.

The patient was treated in accordance with current guidelines and tested negative by NAT at a post-control; no secondary cases are known. Subsequently, no similar situations have been reported.

Thus, treatment failure has yet to occur in Denmark.

In the observation period, neither treatment failure nor ceftriaxone resistant gonococci have been recorded.

As in 2017, azithromycin resistance was found in 6% of the isolates, and reduced susceptibility in 4% (1% and 6% in 2016, and 1% and 16% in 2015, respectively). As from 1st January 2019, the European Committee on Antimicrobial Susceptibility Testing (EUCAST) proposes a new delimitation of resistance and susceptibility, as azithromycin should not be used as monotherapy in the treatment of gonorrhoea but always in conjunction with another antibiotic, mainly ceftriaxone. Use of the new delimitation would have caused 1% of the isolates in 2018 to be classified as resistant. 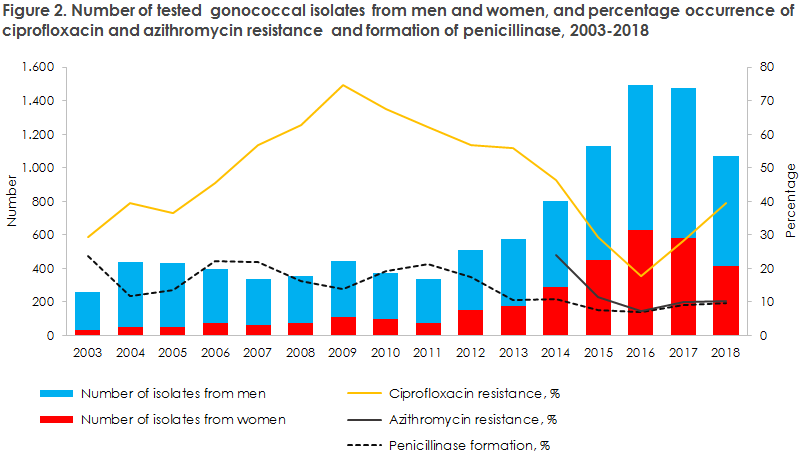 In 2017, one case with a ceftriaxone MIC of 0.25 mg/L was detected, i.e. marginally resistant, and an azithromycin MIC of 0.5 mg/L (reduced susceptibility). Similar findings were not made among the isolates submitted in 2018.

Ciprofloxacin resistance occurred significantly more often among patients aged 30 years of age or more than among younger patients. No certain association was found between age and azithromycin resistance.

Among both women and men (regardless of sexual orientation), the occurrence of ciprofloxacin resistance was higher when the infection had occurred abroad than when it had occurred in Denmark, Table 3.

Among persons who had become infected in Denmark, the occurrence of ciprofloxacin resistance was highest for MSM (38%) followed by heterosexual men (28%) and lowest for women (20%). It may seem surprising that the two latter groups do not share the same level.

Five of the isolates were from ocular samples, one from a woman who was culture-positive for gonococci in the cervix, throat, rectum and urethra; and four from men (aged 24 years and 70 years, respectively). One of these had gonococci detected in the urethra three months later. In one man, gonococci was cultured in synovial fluid.